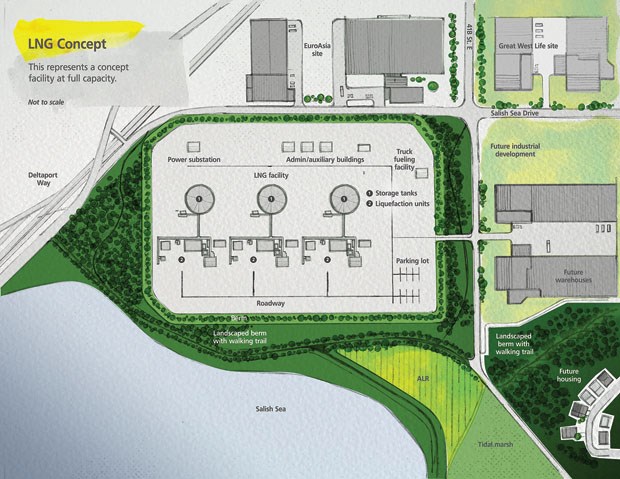 A proposed liquefied natural gas storage and export facility at the Tsawwassen First Nation has drawn concerns from TFN members, according to one member who says there seems to be an attempt to buy their votes.

A proposed liquefied natural gas storage and export facility at the Tsawwassen First Nation has drawn concerns from TFN members, according to one member who says there seems to be an attempt to buy their votes.

This week, a member who wanted to remain anonymous provided the Optimist with a copy of a question-and-answer sheet from TFN government explaining the project and the approval process, which includes a vote by members next Wednesday.

The fact sheet indicates each TFN member would receive roughly $5,000 per year for up to three years while the facility is being built and $15,000 per year once it's operational. Payments would be made quarterly and would continue for the entire length of the 40-year lease.

Last month, the TFN and FortisBC made a surprise announcement that a proposal will be put to TFN members to build an LNG plant on 32 hectares (80 acres) of Tsawwassen lands.

The natural gas would be transported to the facility via FortisBC's transmission system. To open in 2022, the plant would cool and liquefy the gas on site, store it and transfer it to ships bound for Asia.

The concerned member indicated fellow members are upset at the lack of information, quick vote and that they will have no further opportunities to vote. Future decisions on the project will be up to the TFN's executive council, a smaller group from within the elected legislature.

The member also listed concerns regarding the environment and safety, noting there appears to be no environmental assessments available prior to members voting.

Saying there will be a complete environmental assessment and risk analysis, and that members will be consulted at various stages, TFN CEO Tom McCarthy told the Optimist that even if there's a positive vote next week, the plant is by no means even close to a done deal.

"What we're doing with this vote is asking members whether they even want TFN to consider this concept of LNG at all. We're out to members extremely early, at the very start before the project development process even gets going, with a concept. To be as open as possible, we're going at this very early stage to say, 'Here's a potential concept, it's an idea, are you interested in us pursuing this idea on this piece of land?'" he explained.

"What people don't understand is this vote says, 'Yes, keep working on this concept.' If members vote yes, it's not a done deal this project will go ahead. Tsawwassen (First Nation) has negotiated with the partners that there are at least five different approval points where TFN's executive council will have an opportunity to say yes or no in terms of whether or not it wants to proceed with the project."

In addition to direct payments to members, the facility would generate millions for the TFN annually that would go to improvements to social programs and infrastructure.

An information meeting was held for members this week, but of the approximately 370 members of the TFN, about 170 don't live on the Tsawwassen lands. About 40 per cent of members are under the age of 18.