EXTRA EDITION 1: Warning: Graphic Content OK, guess what peeps, we're doing a fast forward into the future...just a little one to wet your beak.
Dec 27, 2016 2:26 PM By: Delta Optimist 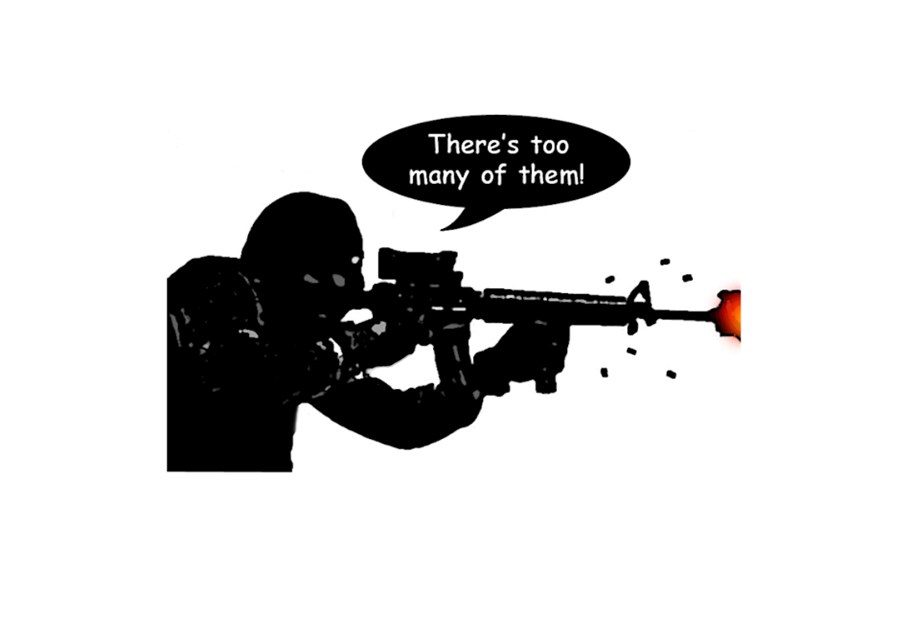 OK, guess what peeps, we're doing a fast forward into the future...just a little one to wet your beak.

Screw it if it breaks the rules, we're doing it anyway!

So, all right, get a load of this: We're still in year one. This grim scene takes place in the suburbs of Vancouver, Canada. It's an already ruined, crumbling scene that reeks of rotting flesh and all-around putridity. That includes the distinctive hint of poop infused with burning hair! 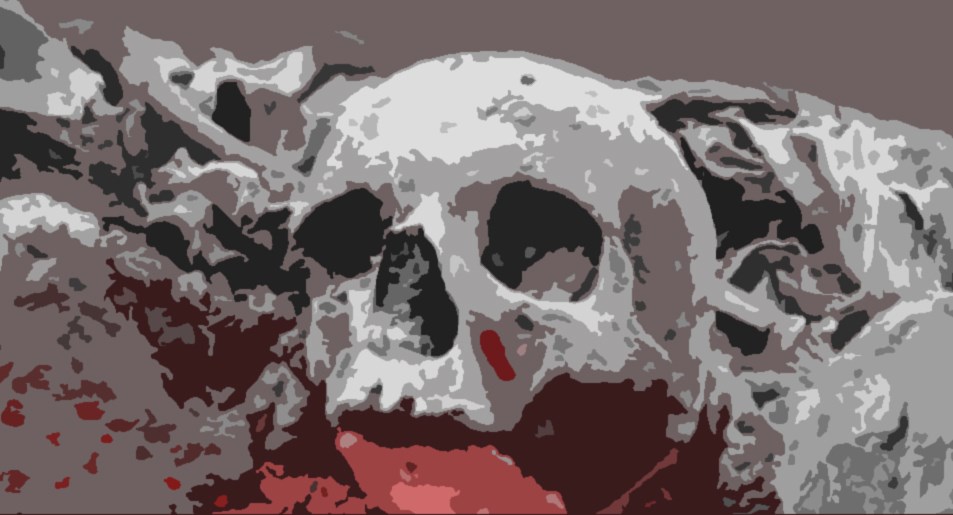 Abandoned cars, debris and hollowed out corpses are everywhere, and there's also that howling wind that makes it seem (yes, still) like you're in some spaghetti western. This ubiquitous hopelessness has a cheesy apocalyptic video game feel written all over it. 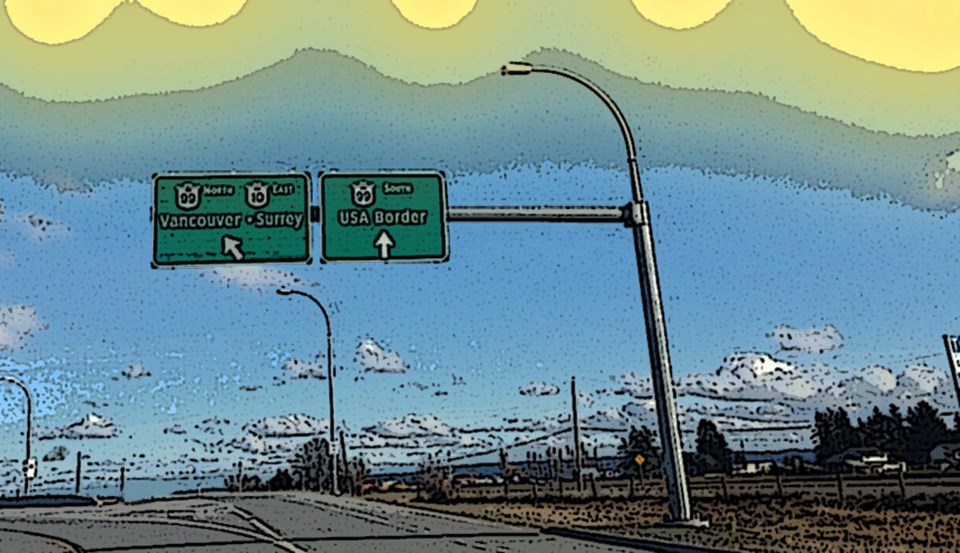 It's a muggy, dim late afternoon as three desperate men run their tails off, pursued by literally thousands of growling plague monsters, skin completely discoloured and peeling, clothing filthy and tattered, of course! They're all determined to tear their targets to bloody little pieces and eat, eat, eat!

The runners had seen too many good people including loves ones devoured. Ya, not a good way to go! Natural deaths nowadays are a rarity for those who hadn't been infected.

The fleeing survivors are led by an unswerving former hockey player, a superstar back in the day - a good Canadian kid from North Battleford, Saskatchewan.

However, he may have overplayed his hand once too often in this depressing new world and now finds himself in a real Texas-sized pickle (Yes, this is Canada but there's no other way to describe the lunacy).

Our most righteous of dudes, Leo McGregor, isn't here, although he has hooked up with the leader and, if things had played out just a little different, could have been running his ass off in this scene as well. 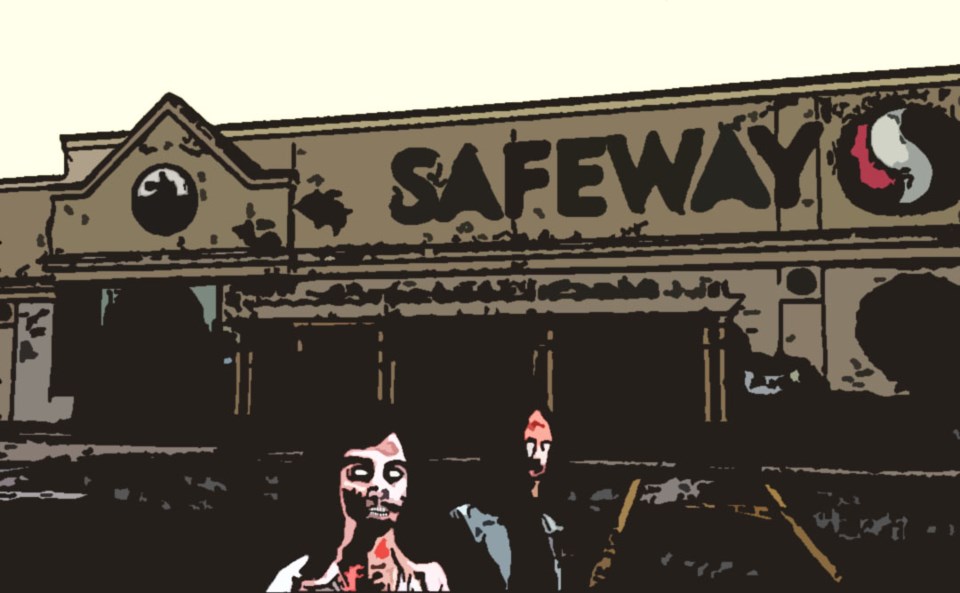 The three brothers in arms have to smash a few rotten skulls as they scurry to a Safeway, making their way through the littered interior. One of the prey sees something on a shelf he's been dying for - jars of orange marmalade. Too bad there's rotting, voracious corpses between him and that splendid prize.

They somehow make it to the roof of the grocery store, locking and securing doors on their merry dash.

They're safe, if you want to call it that for the moment, but the ravenous dead have completely infiltrated the rest of the building - zero chance escape! 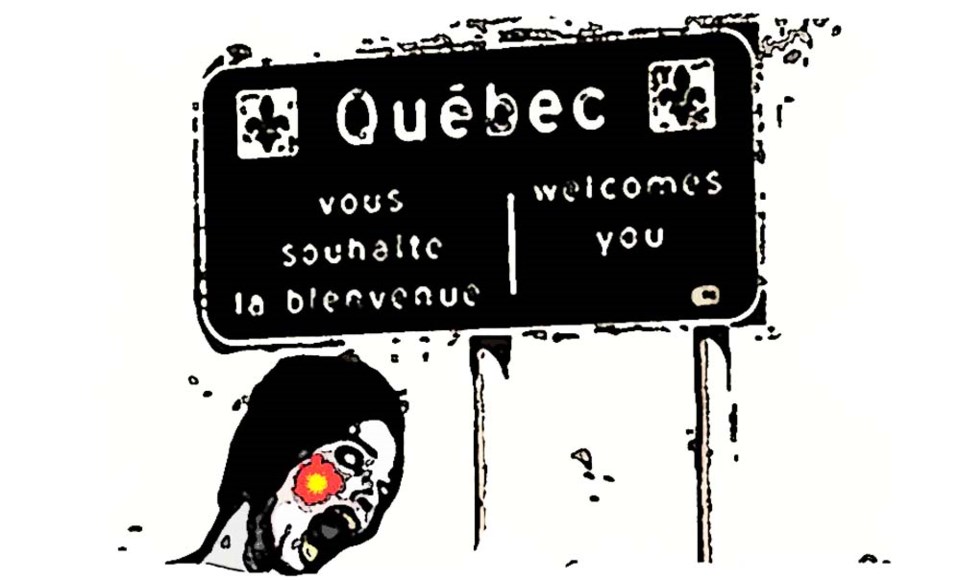 Too exhausted and numb to feel deflated or terror, the three stand on the roof's edge and look down upon what appears to be ten or twelve thousand shuffling and hostile creatures surrounding the complex, all reaching up and with blackened mouths open. A sea of stink and decay.

The stadium of distorted groans and moans is both annoying and deafening. Let's see if there's a super clever plan to get out of this mess or if these guys will soon become a bloody entree. Seems it may be better to just jump off the roof into the sea of rotting flesh eaters and be done with it.....nah! 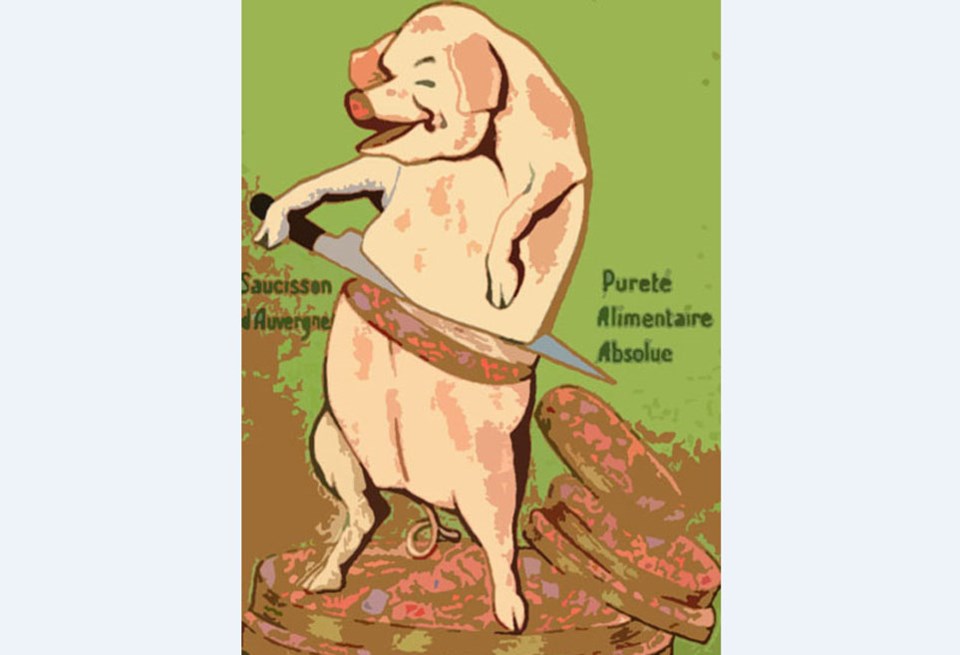 The men don't say a word, feeling this is all too preposterous to be real. Holding a small pickaxe dripping with sickening muck, the sweating leader can only shake his head when he sees their hunter controlling all these monsters, directing the creatures right to their tasty targets.

Want to say crazy? How about outlandish? Down among the gross, vomit face horde and starring right back at the cornered men is a figure out of a comic book. This curious individual is wearing a vintage welder’s mask as well as a black leather bodysuit, army boots and a dirty brown suede trench coat.

It's obvious not an ounce of sunlight is touching this freak's skin.

The dead leave the twisted villain some room, a perfect circle of a dozen obedient metres in circumference.

The malevolent character with barbarous intent raises its (his/her?) arms, seemingly ordering the hungry minions through some form of bizarre telepathy to do whatever it takes to destroy their prey. It's like the men on the roof are the only pair of Louis Vuitton shoes marked down ninety nine per cent on Boxing Day.

No matter, the leader doesn't give a sh-t that the deck stacked when thinks how his pal Leo would have reacted to this farce. He drops his weapon and flips his tenacious enemy the bird. Then, he rubs his hands before telling his comrades with an odd optimism, "Well, put your skates on!" 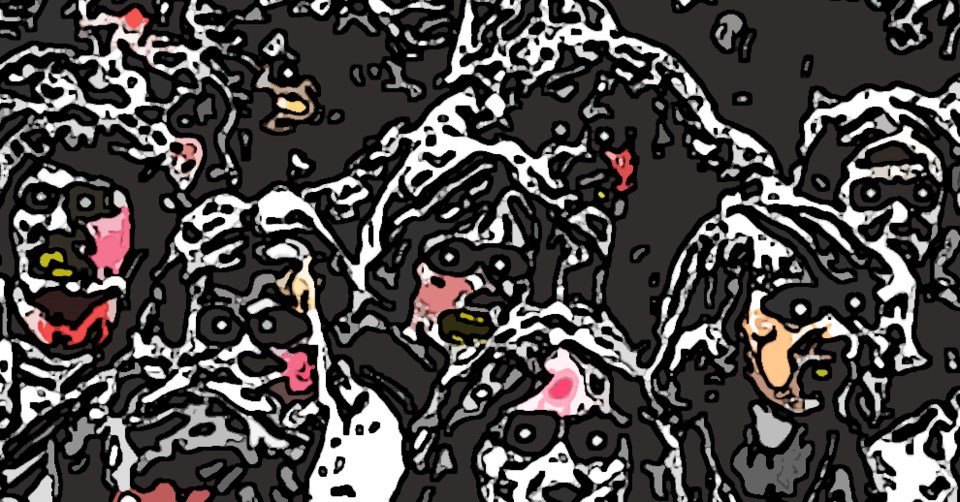 Let's take a gander at another intense scene taking place at this same time for a separate group way up in northern Alaska. The majestic but frigid country was supposed to be safe, far enough removed from the dangers everywhere else in the annihilated world.

However, you guessed it, turns out that's far from the case.

Inside an abandoned U.S. military station, several dog-tired survivors are huddled with only a single flickering bulb providing a little light.

Inside a cold concrete corridor, the small group, which includes Leo McGregor's two little boys, sit with a dumb look, starring at each other and waiting for answers...at least for someone to come up with something smart-sounding to offer. Even a corny joke would be nice.

Yes, there's dread all around as an unbelievable demonic screeching of a large herd of creatures dominates outside the walls.

Whatever is generating those abnormal sounds, it's not the undead, nor animals that we know. It's something nobody would have ever dreamed of, something outside even the most demented of imaginations.

Soon, there's a clicking sound outside a heavy metal door, something petrifying the hors d'oeuvres know painfully well. Safe to say they're in a real pickle too and it doesn't look good. Nope, not at all. 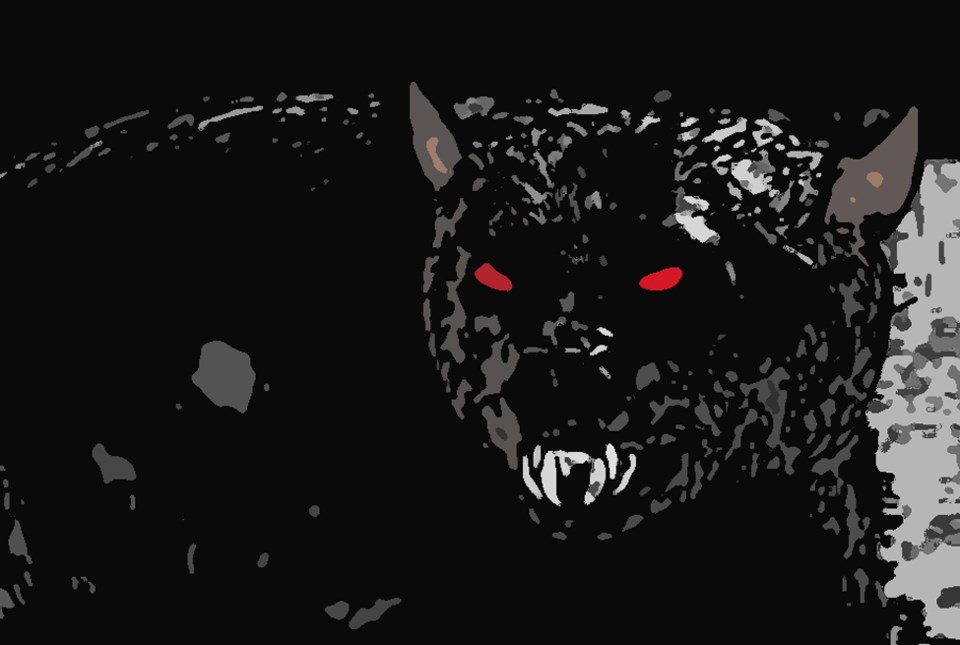 Where's Leo in all this? Stay tuned. Dig it? Well remember it, since we'll get back to these parts of the story later.

You can skedaddle for now or get back to the regular flow of the episodes and read some more if the mood strikes you.

Be sure to shortcut our Maple Leaf Zombies directory page us onto your desktop! 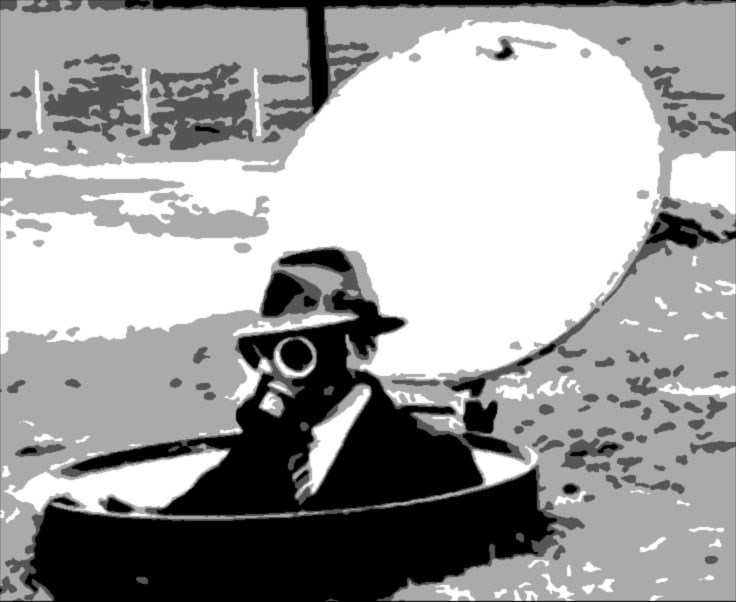 Check out and join our fun-filled Facebook page too https://www.facebook.com/mapleleafzombies/