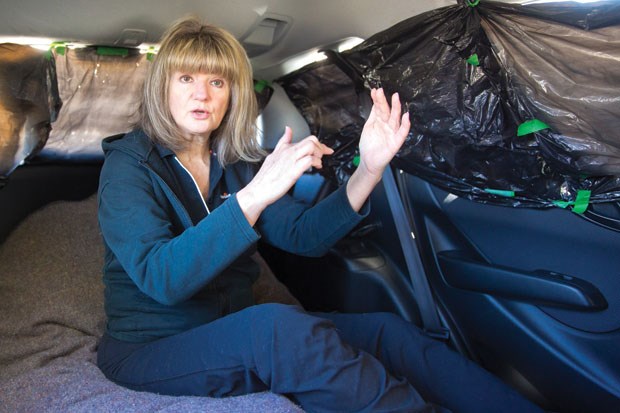 Madison Paage often spends nights sleeping in her vehicle to avoid the second-hand smoke in her KinVillage apartment.Gord Goble

Second-hand smoke is an annoyance for most, but it's leaving Madison Paage in a tough spot.

Having moved to KinVillage's North Court apartment building in Tsawwassen earlier this year, Paage said she now spends hours sitting at McDonald's and nights sleeping in her car because of cigarette smoke from neighbours.

Paage said she had been told by the society running the subsidized independent living complex that smoking in the building was being phased out, although four existing smokers were "grandfathered" prior to the change.

Paage claims far more tenants are smoking and getting away with it, adding her health issues flare up every time she spends some time in her unit.

"I need somewhere to go. I can't continue to breathe that stuff. This is putting me at risk," she said.

Paage, who said she's tried every avenue, even raised her issue with B.C. Seniors Advocate Isobel Mackenzie, who visited Delta a few weeks ago, and was told by Mackenzie that filing a human rights complaint may be the only course of action.

According to the Canadian Cancer Society, second-hand smoke kills 800 Canadians each year.

The website smokefreehousingbc. ca, created by the Heart and Stroke Foundation of B.C. Yukon, states second-hand smoke contains higher concentrations of many of the toxins found in cigarette smoke, increasing a non-smoker's risk of developing heart disease and lung cancer, as well as causing acute respiratory problems.

The way smoke moves throughout a building is unpredictable and it knows no boundaries, the website notes, adding a 2013 survey in B.C. found that half of those living in apartments and condos reported being exposed to unwanted second-hand smoke.

or societies running subsidized housing to create and enforce their own rules.

A spokesperson for B.C. Housing also noted it's up to individual societies that operate buildings to come up with smoking policies.

In B.C., strata corporations can adopt smokefree bylaws that affect individually-owned strata lots, however, the Heart and Stroke Foundation says its survey found that while 70 per cent of strata corporations receive complaints about second-hand smoke, only 25 per cent have a smoke-free bylaw.

Even if a no-smoking rule is in effect, as is the case with KinVillage, nabbing someone who's not allowed to be puffing can be difficult.

KinVillage executive director Donna Ellis said unlike the other residential buildings at the complex that offer various levels of support, North Court is for completely independent living. Thus, staff aren't in the building all the time to monitor residents that might be breaking the rule.

"It can be very challenging. If she (Paage) or anyone was to call us and say somebody is smoking, we will go and walk down the halls and see if we can actually smell any smoke. Our staff can also go into her suite to see if we smell any smoke... we can go

into other people's suites but typically we have to give 24 hours' notice to go into somebody's suite," Ellis said.

"It's a bit tricky with just smelling for it because people can go outside and you can come back in and smell like smoke. If they're heavy smokers, they'll carry that with them and that can get into furniture."

Noting they are doing what they can to address Paage's complaint, Ellis said if evidence is found that someone is smoking, a process that falls under the Residential Tenancy Branch must be followed whereby they are given three warning notices before eviction.