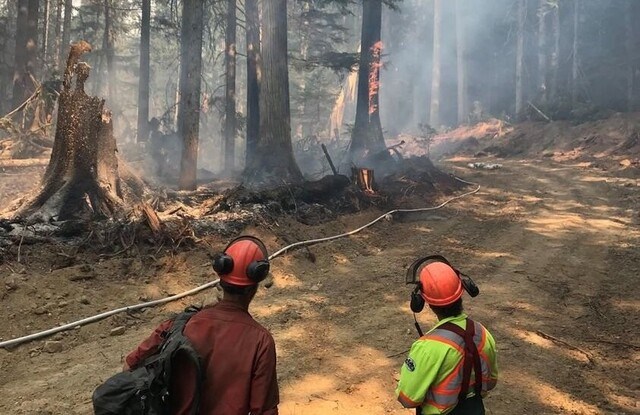 Due to the COVID-19 pandemic and widespread wildfires elsewhere in the world, British Columbia is having a tough time sourcing firefighters from some of its usual allies.

There are currently 297 active wildfires burning across the province, and with no reprieve in the forecast from the dry, hot weather across much of the Interior, B.C. declared a provincial state of emergency Tuesday.

During a press conference from Castlegar Wednesday, Premier John Horgan said B.C. has “all of the resources we need on the ground” when it comes to fighting the fires, but “if we had more we would take them.”

In addition to the 2,500 BC Wildfire Service personnel fighting the blazes, Horgan said crews from Quebec are now working in the province. Additionally, firefighters from New Brunswick and a group of 100 Mexican firefighters are en route.

But while B.C. has regularly swapped crews with Australia, New Zealand and the United States during times of need, that hasn't been possible this year.

“In Australia, they're on lockdown at the moment [due to COVID-19]. We had commitments from them for equipment and management personnel, and that's very helpful, but we're just going to have to wait and see,” Horgan said.

“The challenges here in British Columbia are being felt in Washington, Oregon and California ... so the resources that we would have relied on in the past are occupied in their home jurisdictions when it comes to the U.S.”

“We're not expecting U.S. resources any time soon and our friends in Australia and New Zealand are focused on COVID,” Horgan said.

“We are not alone in this challenge, we are sharing it, regrettably, with our neighbours.”

And while there are evacuation orders and alerts across dozens of communities in B.C. due to the wildfires, the number of people displaced is not near the record-breaking 2017 and 2018 fire seasons, at least for now.

"We need to make sure we can mobilize resources prior to an evacuation order being issued in a region, and that means working with the hospitality sector, working with post-secondary institutions — Thompson Rivers University for example — and other institutions in the Interior that have housing available," Horgan said.

"We want to be able to direct people to those locations. That's what we've done in the past and that's what we anticipate we'll do as the season progresses."

Horgan noted that extreme weather events, like this year's sustained drought and record-breaking heat waves across B.C., are the consequences of the changing climate. And climate change is occurring globally.

“For those who are living through yet another horrific fire season, this is a graphic reminder of how climate change is with us not just intermittently but all the time,” he said.

“We are in an early, early fire season. We've got weeks, perhaps months to go of very challenging circumstances.”