B.C. podcaster looks to uncover the truth about the famous sasquatch 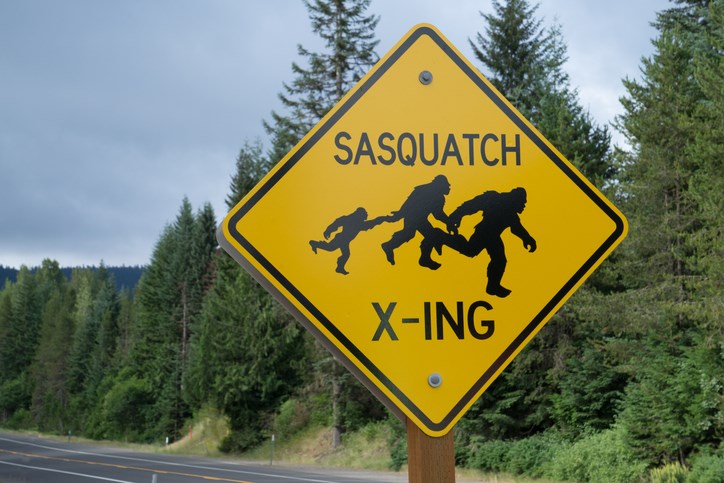 A Sasquatch crossing sign in the Oregon wilderness.Getty Images

For decades now many have been asking the question, does sasquatch exist?

Sheldon Quewezance believes that they do, and he has now launched a podcast aimed at educating people about the creature and interacting with fellow sasquatch enthusiasts.

“I’ve always been fascinated with sasquatch, ever since I was a boy,” said Quewezance.

“When me and two of my best friends started carpooling to work, the subject of sasquatch came up after someone on Facebook posted a picture of some tracks that were found about four years ago. We decided then to try an excursion to an area known for its sasquatch activity.”

Quewezance and his friends embarked on several “field trips” as he calls them, searching at least twice a month for the elusive creature with the help of some sophisticated equipment.

“We have a few guidelines we all follow and gear to help us look such as sound amplifiers, infrared camera, flashlights and of course, bear spray,” said Quewezance.

“There are a lot of creatures in the forest to worry about other than sasquatch.”

Finally, the group was rewarded with a sighting.

“The sighting itself happened in 2018 and actually not far from the city limits, although we never give away locations as we don’t want them to be disturbed,” explained Quewezance.

“The creature had made its way towards the truck as the four of us sat inside and were talking and scanning the forest every so often. I noticed some ‘eye shine’ off in the distance and there it was, peeking from behind a tree and watching us. It didn’t make a move or any noise but just stood there. We began to panic and as I turned away to tell one of the other people in the truck to calm down, I turned back, and it was gone. It lasted about 15-20 seconds in total but that is the second I knew I was hooked on the subject and needed to know more.”

Although Quewezance has been dedicated to continuing the search since his first and only bigfoot sighting, COVID put the expeditions on hold. It was through this downtime that Quewezance decided to launch his podcast as a means of staying connected to his passion.

“The hope with it is to try and normalize the talk about sasquatch because people really need to know that these creatures are out there and deserve respect,” said Quewezance, who has seen the appetite for his work increase to the point that he now releases a new podcast twice weekly.

The podcast features not only Quewezance’s work and experiences, but those of guest speakers as well.

“99% of them have had sightings, but I find my favourite guests have been everyday folks who have sightings. I also have a lot of people who don’t want to be on the show, but tell me about their encounters because they have no one else to turn to. That honours me to a degree I cannot explain,” Quewezance continued.

“A side effect of the podcast is I am actually helping people talk about their encounters and get that weight off of their chest, and to reassure them that they are not crazy. I just did an episode with a man named James who held in his encounter for 30+ years because he had a fear of being noted as crazy (Ep. #27 - It Was Moving on The Ground Like A Soldier). His encounter actually traumatized him for more than three decades and it really gives my show purpose when I know I am helping someone out.”

There is often a division between believers and non-believers which has only intensified in the more than 50 years since the infamous, controversial video of an alleged female bigfoot nicknamed ‘Patty’ was released by Roger Patterson and Robert Gimlin.

As for the podcast ‘Nicola Valley Bigfoot,’ which is available on Spotify, Quewezance notes it has been a learning process and a very different venture from his usual role which is manager of the Shulus Community Arena in Lower Nicola.

“It’s a lot of work but is worth the time spent editing and brainstorming ideas for future episodes,” said Quewezance.

“I’m definitely still learning the process, but the show quality has improved drastically over the course of a few months and I am excited about where the show is going. I was asked recently if I will give it a rest once I am able to get back out in the field. That was always the plan, but with the demand from the audience, I don’t think I could if I wanted to.”

The work has been well worth it, with Quewezance happy to have met new people and made many new friends through the podcast. He hopes to attend sasquatch-related conferences this year should restrictions allow. This will also allow him the chance to make new connections and draw more guest speakers.

“I usually aim for guests who have had encounters but am not limited to only them.

“I’ve interviewed researchers who have never had an encounter but are out in the field searching whenever they have a chance, so I encourage everyone to reach out.”