The party was hosted just hours after Premier John Horgan announced the suspension of indoor dining at all restaurants, pubs and bars.
Mar 31, 2021 1:03 PM By: Wayne Moore / Castanet 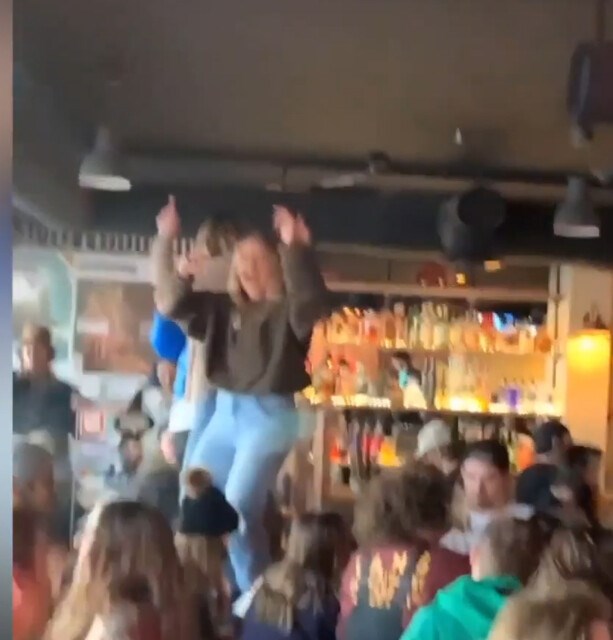 Big White is taking the unprecedented step of trying to terminate the lease for Charley Victoria's Restaurant.

This comes after restaurant owner Justin Reid hosted a large party Monday night, just hours after the province announced the suspension of all in-house dining due to a sharp rise in COVID-19 cases.

The video, showing several dozen people partying in the restaurant without masks and not observing physical distancing, has gone viral.

"This can't be overlooked," said Ballingall.

"We've initiated legal proceedings to terminate his lease and evict him from the premises."

This is the first year of operation for the restaurant after Reid signed a three-year lease with a three-year option last year.

"They're not going to go easy on him," said Ballingall, adding the ramifications for his actions are real.

Ballingall says this is the first time the ski hill has ever had to initiate this type of action against a leaseholder on the hill.

He says the damage Charley Victoria's has inflicted onto the ski hill as a result of Monday's event is being felt.

Ballingall also confirmed two ski hill employees have been fired as a result of the party, but added most people inside the restaurant had just been laid off due to the earlier order by the province.

Justin Reid calls a decision to host a large party at his restaurant on Big White Monday night "ignorant," and takes full responsibility for what transpired.

Reid, owner of Charley Victoria's Restaurant on Big White, penned a statement after video of the large party made its way onto social media yesterday.

The video shows dozens of people without masks and not socially distancing while dancing on tables inside the restaurant in contravention of provincial health orders, and with the approval of staff.

"I take full ownership for this ignorant decision that I made out of pure selfish frustration over the recent announcement, regarding COVID restrictions in our community," said Reid.

"My decision to let this happen was wrong. I take full accountability for, accept all consequences of, this poor decision. As a community, we have all been working so hard and making sacrifices to curb COVID-19 and keep each other safe, and what happened at Charley’s Monday night was unacceptable and did not demonstrate leadership or compassion for my community, in which I care deeply about."

Reid went on to say he let all mountain goers down with his decision Monday.

"I would like to apologize to Big White Ski Resort, as they have shown me respect and have welcomed me into their business community during Charley’s first year of operation and I’m aware and realize what I potentially jeopardized for them, and for that I’m truly sorry.

"I would also like to apologize to my staff. The Charley’s team has made my business what it is today and is the reason so many people have enjoyed coming here, I owe you all so much, and will work to earn your trust back as a leader."

Reid concluded by saying frontline and essential workers in the Okanagan are the "true heroes," and have put our health and safety first.

"I’m so very sorry for the disrespect I’ve displayed."

The party was hosted just hours after Premier John Horgan announced the suspension of indoor dining at all restaurants, pubs and bars in the province to stem the rising COVID-19 cases.