The recent discovery of the bodies of 215 children in unmarked graves on the grounds of the old Kamloops Indian Residential School has shone a harsh light on one of the darkest corners of Canada’s past.

The discovery is a reminder that reconciliation with Indigenous people is not something that ended with the compensation and formal apologies given in 2008 under the Residential Schools Settlement Agreement. It is an ongoing and fundamental change in Canada’s relationship with First Nations.

The Kamloops Indian Residential School was just one of more than 130 in Canada. And it was just the first one where investigations have confirmed what First Nations have long suspected: There were hundreds, perhaps thousands, of aboriginal children who died at residential schools, many from diseases like tuberculosis, but whose deaths were not documented. Or, if they were documented, the churches that ran the schools have yet to release all the relevant archival documentation.

“This is just the beginning,” Murray Sinclair, chairman of the Truth and Reconciliation Commission (TRC), warned at a recent Indigenous Partnership Showcase forum.  “This is one school of hundreds. We need to prepare ourselves for the fact that there are other schools that have equally large numbers.

“Most of the deaths that we’re talking about occurred in Catholic schools. And the Catholic Church has so far refused to allow unimpeded access to archives. Getting full and complete access to those archival records is important.”

Understanding what reconciliation is, and why it’s necessary, involves a painful history lesson. It is a legal obligation and process that is still evolving, as courts work out issues like Aboriginal rights, title and self-determination.

And it is about changing relationships between First Nations, governments, business and society as a whole – something that Canadian governments are hoping to accomplish with the adoption of the United Nations Declaration on the Rights of Indigenous Peoples (UNDRIP).

There is a role for business to play in economic reconciliation, which is key to addressing the poverty and lack of jobs in many First Nations communities. The TRC calls on businesses to adopt UNDRIP as a guiding document for its dealings with First Nations and to commit to meaningful consultations with Indigenous people.

Although the TRC came out of the residential school settlement agreement, it addresses all Canadian laws and policies that affect Indigenous people, not just residential schools, and is essential reading for all policy makers and educators.

The TRC says reconciliation includes formal apologies and reparations, the revision of Indigenous law and legal traditions and “an ongoing process of establishing and maintaining respectful relationships.”

While calls for the cancellation of Canada Day celebrations and removal of statues of John A. Macdonald may be welcomed by some First Nations, Steven Point, former tribal chairman of the Stol:lo Nation, provincial court judge, BC Treaty commissioner, B.C. lieutenant-governor and current chancellor of the University of British Columbia, isn’t convinced that it’s an essential part of reconciliation.

“Down the road, we’re going to find out the whole truth of what’s happened,” he told BIV. “As bad as that history is, let’s not end our relationship because of our history – let’s improve our relationship. Canada is a lot more than its history. Just because we’ve got dirty laundry, you don’t need to throw the baby out with the wash.”

While many Canadian laws and policies contributed to what the TRC describes as “cultural genocide,” residential schools were the keystone of the Canadian government’s goal of assimilating Indigenous people. Roughly 150,000 native children in Canada passed through the residential schools, run mainly by the Catholic, Anglican, Presbyterian, Methodist and United churches.

“This was done not to educate them, but primarily to break their link to their culture and identity,” the TRC notes. 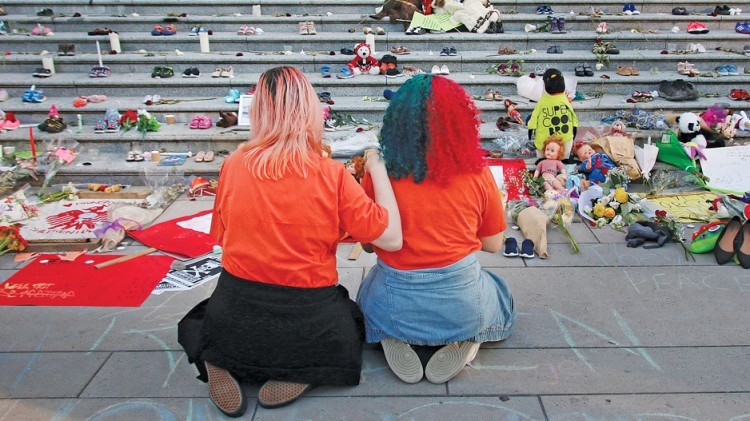 Shoes, flowers, photos and other items placed on Vancouver Art Gallery steps as a memorial for the 215 children whose bodies were recently discovered buried on the grounds of the former Kamloops Indian Residential School. By Rob Kruyt

The commission lists 10 guiding principles. No. 1 is the adoption of UNDRIP as a fundamental framework and 94 specific calls to action, which include reforms in child welfare, health, education and justice.

The TRC was part of the ongoing reconciliation process. It was commissioned as part of the Indian Residential Schools Settlement Agreement, the largest class action settlement in Canadian history.

Many residential school survivors suffered sexual, physical and mental abuse, and more than a dozen former residential school employees have been convicted of crimes that included sexual molestation. To deal with a growing number of lawsuits, the federal government agreed to a comprehensive class action.

A total of $1.9 billion was set aside as part of the Residential Schools Settlement Agreement, with each residential school survivor eligible to receive $10,000 for the first year of attendance and $3,000 for each subsequent year of schooling. The process also led to formal apologies from the prime minister of Canada, the RCMP, the churches and Catholic orders that ran the schools.

Reconciliation is therefore also an evolving legal process of recognizing aboriginal rights and title to traditional lands and resources. Since the 1970s, a succession of Supreme Court of Canada rulings has affirmed the existence of Indigenous rights that pre-date Confederation.

As for UNDRIP, the B.C. government formally adopted it last year, and last week the Senate approved a bill to pass it at the federal level.

Perry Bellegarde, chief of the Assembly of First Nations, said the legislation to implement UNDRIP in Canada “can be a pathway to reconciliation guided by our inherent and treaty rights.”

Because treaties were never signed with the majority of B.C. First Nations, the federal and provincial governments have been trying since the 1990s to address outstanding land claims through the BC Treaty Commission. But only a handful of treaties have been signed, as some First Nations either withdrew from the process or never participated in it.

The B.C. government has therefore been trying to address rights and title through nation-to-nation reconciliation agreements, like a memorandum of understanding it signed last year with the Wet’suwet’en First Nation and, more recently, a shared land-use agreement with the Tahltan that may form the foundation of a reconciliation agreement. These agreements contain many elements of a treaty, but without the ceding of title in exchange for defined title lands.

Business has a role to play

While reconciliation is a responsibility that rests largely with governments, there is also a role for business, aboriginal leaders say. Governments alone can’t address the poverty that afflicts many First Nation communities. The private sector can provide the investments needed to develop new businesses ventures and industries in partnership with First Nations.

There are a number of examples in B.C. of businesses entering benefits agreements with First Nations involving mines, pipelines and other projects, and in some cases First Nations are now becoming business partners and shareholders.

“I think that’s the future for the Indigenous relationship with companies: Let’s find ways of getting past the roadblocks, because Indigenous people aren’t against resource development, so long as it’s environmentally safe and creates some jobs.”

One recent example of partnerships with First Nations is in Kitimat, where the Haisla First Nation has found a major industrial partner – Pembina Pipeline (TSX:PPL) – to help build the $3 billion Cedar LNG project, which is a Haisla-owned venture.

Haisla Chief Crystal Smith said these sorts of partnerships with industry have resulted in jobs for her people, and new sources of revenue to fund health, education and social programs, including native language instruction.

“We’ve been able to invest a huge amount of money [in] a culture and language department that we’ve never been able to do before,” Smith said.

Smith measures the Haisla’s success in the number of her people who now own their own homes, and the increased enrolment of young Haisla people in post-secondary education.

“Just over the last couple of years that I’ve been on council, it’s the most mortgages I’ve seen in our community, with our members, as young as 25, getting their first home and being able to pay that mortgage,” she said. “We have a record amount of our people accessing post-secondary education.”

But even ventures backed by one First Nation may be opposed by another. The Coastal GasLink pipeline, for example, that would feed Cedar LNG is supported by the elected band councils of the Wet’suwte’en, but opposed by most of their hereditary chiefs.

Murray said business needs to be mindful when dealing with First Nations that elected band councils are a construct of the federal Indian Act, and that the traditional leadership needs to be respected and consulted as well.

“I think you need to be more respectful of the fact that there is a split in leadership at the community level.”

Murray added that many First Nations across Canada still have their own traditions for selecting leaders outside of the Indian Act.

“I’d say probably a majority of Indigenous communities in Canada have traditionally selected leaders who are not elected in accordance with the Indian Act, but still have a significant role to play.”

Indian residential schools were designed with cemeteries
Jun 21, 2021 6:00 AM

Residential school survivors seek to witness demolition of place of nightmares
Jun 21, 2021 6:00 AM