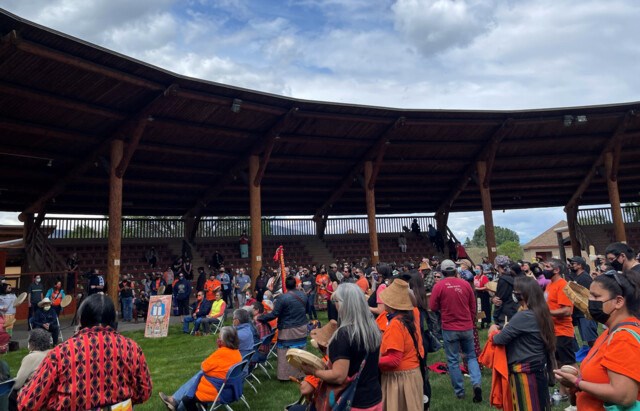 Mourners gathered at the Kamloopa Powwow Grounds on Friday, the day after Tk'emlups leaders announced the remains of 215 children were buried near the former Kamloops Indian Residential School.Sydney Chisholm

Mourners are grieving the grisly discovery of the remains of more than 200 children found buried near the former Kamloops Indian Residential School, with some in the First Nations community saying the find confirms stories they’d heard for years.

“It’s always been known when we were kids,” Willow George told Castanet Kamloops.

“We knew when we were kids — we knew they were buried, they were put in the river, in the pond, in the furnace. But the number was never known.”

George, whose parents and brothers attended the residential school, formed an impromptu drum circle Friday on Seymour Street with a handful of co-workers.

Nicole Williams, also part of the drum circle, said the discovery validates the trauma she saw first-hand in some relatives.

“Some of our family members never really talked about what happened there,” she said.

“Our tradition was that you weren’t supposed to talk about bad things that happened. That was the way we were taught.”

Williams, who grew up in the Lytton area, said she remembers playing as a child among “the moguls” — mounds in the earth believed to be burial sites for children who died while attending the residential school there.

“My mom would say, ‘All those indents in the woods, those are from the children they buried,’” she said.

In a statement Thursday announcing the discovery, Tk'emlups Chief Rosanne Casimir said the find confirmed long-held beliefs about children dying and being buried at the school. Casimir said the remains of 215 children have been confirmed by ground-penetrating radar.

“It’s confirmation of something we already knew,” she said.

“So much has been hidden and it’s starting to come out now. People are starting to understand.”