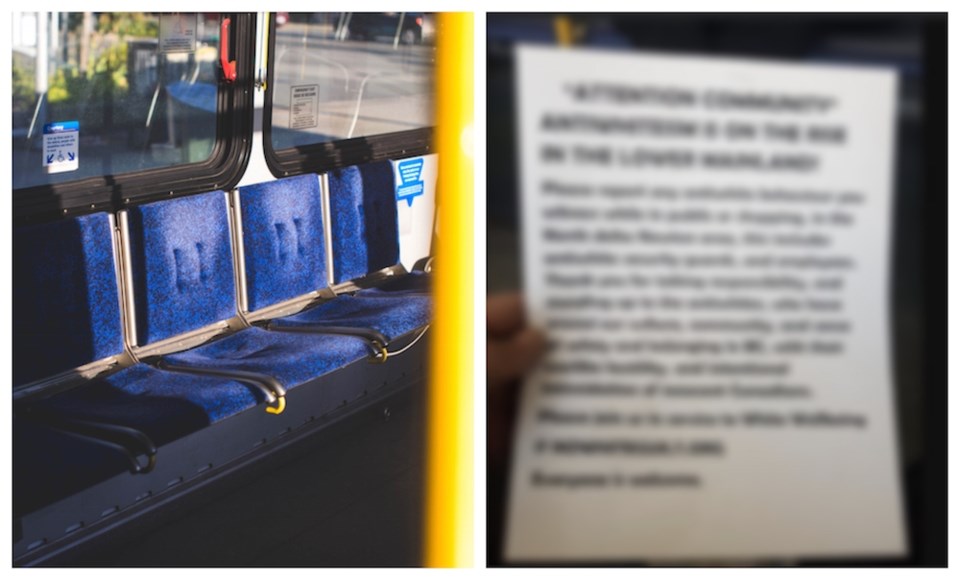 A disturbing flyer that claims "anitwhiteism" is on the rise was seen on Metro Vancouver transit on June 9, 2021.Photo via willie1989/Getty Images and @gloomybb / Twitter

A disturbing flyer that claims "anitwhiteism" is on the rise has been seen on Metro Vancouver transit.

An image of a flyer is circulating on social media that asks people to "report antiwhite behaviour" they observe in North Delta and Surrey's Newton area. It also contains a link to a website called "No White Guilt" which features several disturbing videos.

The flyer was reportedly discovered on the side of a TransLink bus.

What to do if you see this type of propaganda

"Whether or not a criminal offence or a breach of policy occurred, the promotion of any form of hate on the Transit system is totally unacceptable," he said. If a person sees someone posting this type of material or any propaganda promoting any form of hate or racism please contact the Metro Vancouver Transit Police."

In October 2020, V.I.A. reported that a man was allegedly yelled at by a white supremacist while he was taking down a flyer that read, "BC is now the most antiwhite place on Earth."

The flyers also stated that it is "not okay to be antiwhite."

You can contact Transit Police by discreetly texting 87-77-77 or calling 604-515-8300 if you observe material or behaviour promoting hate or racism.