Delta artist teams up with McCloskey students for mural project

Led by the volunteer efforts of a local artist, students at McCloskey Elementary are putting the finishing touches on a lasting legacy.
Jun 5, 2021 7:00 AM By: Mark Booth 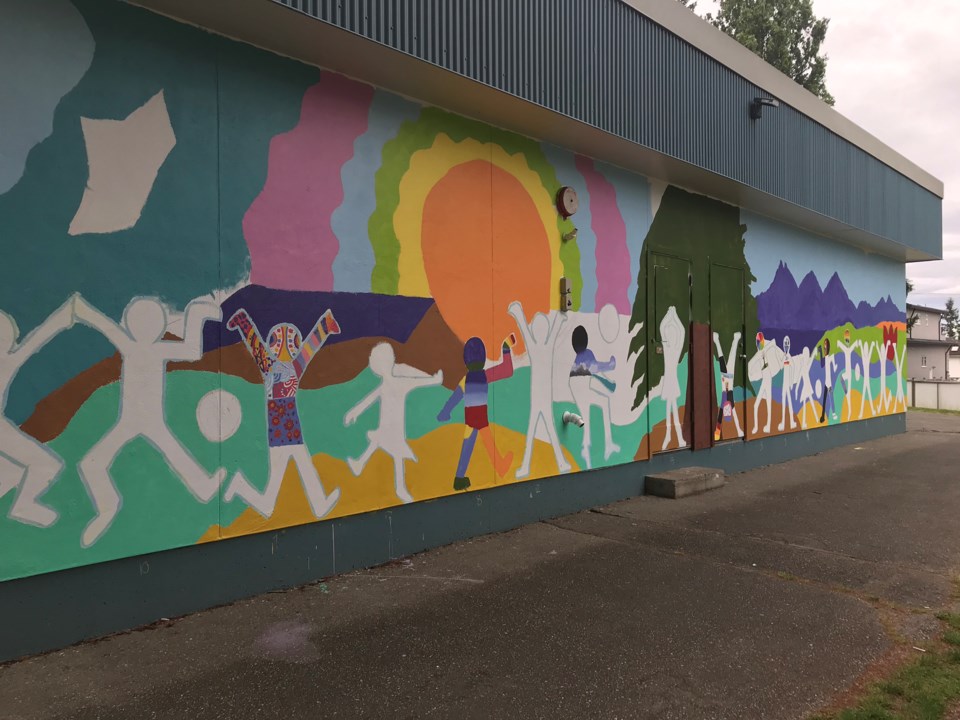 A mural on the west wall of the North Delta school is expected to be completed sometime next week. It culminates a year-long project that involved all 365 students.Contributed/McCloskey Elementary

Led by the volunteer efforts of a local artist, students at McCloskey Elementary are putting the finishing touches on a lasting legacy.

A mural on the west wall of the North Delta school is expected to be completed sometime next week. It culminates a year-long project that involved all 365 students.

It was last summer when McCloskey vice-principal Kristen Vogel reached out to the South Delta Artists Guild about collaborating on a potential project. Another school year was approaching amid the COVID-19 pandemic where students would be placed in their learning cohorts and there would be no big events.

SDAG’s Jimena Grueso offered her services and the end result is more than Vogel ever imagined.

“There was a lot of uncertainty of how this would unfold but it has unfolded fantastically,” said Vogel. “All 365 kids will have a chance to paint on the wall and leave their legacy which is really cool.”

After a few conversations with Vogel, Grueso’s game plan went into action.

The pandemic and safety protocols made it impossible to visit the school in person, so she hosted Zoom classes for all 16 divisions. With students ranging from Kindergarten to Grade 7, she had to be innovative with her instruction. She introduced them to the work and vision of Keith Haring, the renowned artist who painted murals and silhouettes throughout New York City.

“When I talked to Kristen she said the most important thing was to create the feeling of belonging among the students and try to talk about their most important values,” explained Grueso, who has run children’s art workshops in Mexico.

“So we were thinking how do we make them part of the mural,” she said. “We prepared the classes, for Kindergarten to Grade 2. I knew they needed different sessions than the older kids.”

Initially, the students worked on silhouettes that were displayed throughout the school. Grueso explained the colour wheel of emotions and the students watched Inside Out, the 2015 Disney/Pixar animated feature film that focuses on the emotions of a young girl that lead her through her life and new surroundings.

“It’s how you live all the time with all the emotions and can’t be all the time happy. That was the main purpose,” added Grueso. “It was okay to feel different and to try to find colours, doodles and lines that expresses how you are feeling. They came up with some great ideas.”

For the wall mural, Grueso created silhouettes for each class that are divided up further for working groups. Some initial mock-ups allowed her to get additional feedback from school staff.

“It’s really been a beautifully collaborated partnership,” added Vogel. “It’s definitely been a school year where you need to lift up the building and (the mural project) has definitely been one those things to do it.”