The South Delta Artists' Guild's seventh annual juried Oil & Water exhibition is running this month at the spruced up Tsawwassen Longhouse Gallery. Guild vice-president Lennart Osterlind says there were 104 submissions and 71 of those are on display.
Aug 5, 2011 1:00 AM By: Dave Willis 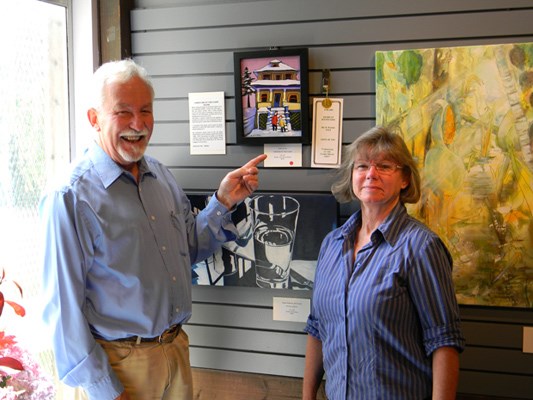 Guild vice-president Lennart Osterlind says there were 104 submissions and 71 of those are on display.

"We're very happy we were able to get such a diverse type of show - with both large and small paintings as well as some that are way out in fun and some that are very naturalistic, like Faith's forest scene here," says Osterlind, referencing North Delta artist Faith Love-Robertson's Best of Show-winning painting.

"I like the quality of light. It's soft. The mist sort of shrouds everything and you see these faint images. So it just adds a little mystery to the whole scene," says Love-Robertson, who notes the bog is something she paints a lot.

The artist says she does a lot of walking and outdoors activities around Delta.

This is the first time Love-Robertson, a member of the guild for 20 years, has won the Best of Show award at the group's Oil & Water exhibition.

"It's a real thrill." She says last year's exhibition's guest book had entries from attendees from all 10 provinces, 20 American states and six European countries.

"It's a great thing for us but it's also great for Delta, I think, to have a juried show where there's a high caliber of work."

Love-Robertson says the show also gives artists a chance to get out of the isolation of their own studios and meet each other as well giving the community a chance to see there are artists in their midst.

Her other painting in this year's show is a soft pastel piece called Spring Promise. The painting, which depicts a part of the Serpentine Fen, also won a merchandise award.

Osterlind says around 140 people came out to the show's opening reception last Thursday evening. The gallery, along with a few other improvements, has been repainted and the colour of the feature wall has been changed.

He was thankful for the business community's help in making the show a success.

Guild member Anita de Vos won an Award of Distinction for her acrylic painting titled Caroling at the Clark House 1965.

"That was a really nice surprise," she says of the award, adding she was just happy to have a painting in the show.

The naïve-style piece shows carolers in front of a Ladner home at the end of 57th Street. De Vos based the painting on a photo she found while looking through a bunch of old pictures.

"This one just kind of popped out at me."

Oil & Water runs until Saturday, Aug. 27 at the Tsawwassen Longhouse Gallery, 1710-56th St. (adjacent to the South Delta Recreation Centre). The gallery is open from Tuesday to Sunday, 11 a.m. to 4 p.m.