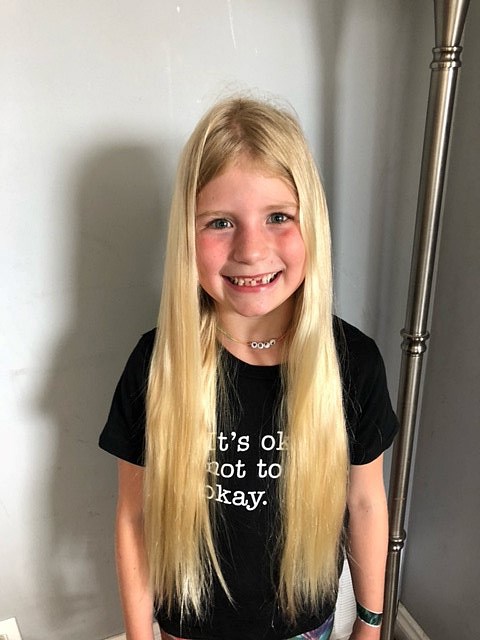 Seven-year-old Grace Zulke will be cutting her hair for the first time in two years for a terrific cause, donating her locks to Wigs for Kids and raising for the charity as wellSubmitted/Zulke family

It will be a special trip to her aunt’s hair salon later this month for Grace Zulke.

On May 29, the seven-year-old Grade 2 French Immersion student at Ladner Elementary will have her hair cut for the first time in two years at Refined Salon and Spa in Tsawwassen.

She will be donating it to Wigs for Kids BC (W4K BC) and has also launched a fundraising campaign through the BC Children’s Hospital Foundation too.

The volunteer-run W4K BC organization provides funding to cover the cost of custom-made human-hair wigs for children and teens at BC Children's Hospital who have suffered hair loss due to cancer treatment or other serious illnesses. Donations help families pay for medications and feeding supplies that are essential for treatment, but not covered by their medical plan.

“I’m very much looking forward to it as we tangled out her hair last night,” laughed her mom Vanessa when the Optimist interviewed her on April 29.

It was back in Kindergarten when Grace last got her hair cut. She let it grow it for a year then didn’t have much of a choice when the COVID-19 pandemic closed salons for an extended period last spring. Nearly a year later, she learned of Wigs for Kids.

“It’s something she talked about for a while and she made the decision early last month,” added Vanessa. “This is (the charity) she wanted to do it for. She is excited that her aunt gets to do it and she’s been asking me every day what her fundraising total is.”

Brother honours the memory of his sister with Sophia’s Marathon
Apr 19, 2021 9:00 AM
Comments