BC Greenhouse Growers’ Association launches ‘Did You Know’ video series

So often people drive right by greenhouses not knowing what is going on behind the glass.
Aug 12, 2018 6:45 PM By: Delta Optimist 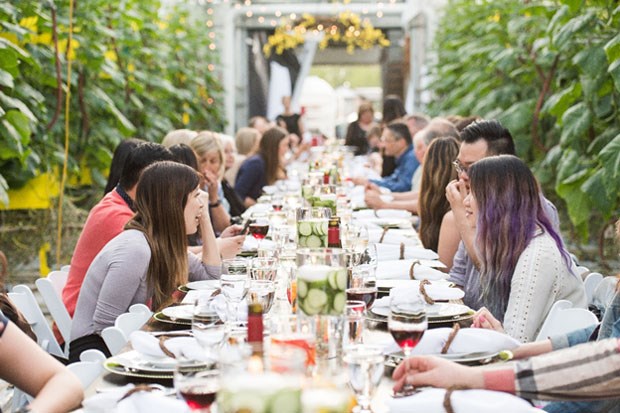 Guests enjoy a farm-to-table meal inside a greenhouse as part of awareness efforts.submitted

So often people drive right by greenhouses not knowing what is going on behind the glass. Over the years, hundreds of questions have been asked related to carbon footprint, pollution and growing practices, which is why the BC Greenhouse Growers’ Associationexpanded its awareness campaign this year.

For the past five years, BC Greenhouse Veggie Dayshas occurred every spring. The first BC Greenhouse Veggie Days celebration was held in 2014 when the Vancouver Art Gallery plaza was transformed into a giant vegetable-themed party. Videos were created to promote the arrival of fresh locally-grown produce, and greenhouse growers were profiled along with chefs and foodies.

While the initial celebration certainly gained attention and had people talking about greenhouse vegetables, a genuine understanding still needed to be established, which is what led to educational tours.

Each spring, the public has been invited to tour select greenhouses where growers teach the people about how greenhouses operate, and retailers display colourful signage at grocery outlets throughout B.C.

This year, the BC Greenhouse Association continued with its tour days but added:

The video series answered these questions:

Other videos included featuring a multi-generational family –the Moermans—and sharing the story that greenhouse growers are, simply, farmers.  Surprisingly, it has been rumoured that greenhouse growers were perceived to be scientific-like, mysterious, and unapproachable. This idea that farmers could only grow produce in land is a restrictive and widely-held belief.

The objective of the video, A Day in the Life of a Greenhouse Farmer, was to educate the public with respect to what it means to be a greenhouse farmer and to show the dedication that each grower provides to his or her crop.  All videos can be viewed on BC Greenhouse Growers’ Association’s social media channels.

The greenhouse-to-plate event was orchestrated to provide an immersive experience as media and influencers enjoyed a farm-to-table meal prepared by a locally renowned chef. The simplicity and vibrancy of the vegetables were highlighted as guests dined in a greenhouse.

Given the success of this event, plans are to host a ticketed long table dinner in the spring of 2019, with proceeds donated to an agricultural initiative, which has not yet been decided.