This year Deltans could see a record number of snow geese passing through the Fraser River estuary on their migration cycle and if the number of photos and comments on social media are any indication, residents are in awe of the spectacle. Dr.
Nov 7, 2020 11:00 AM By: Cameron Thomson 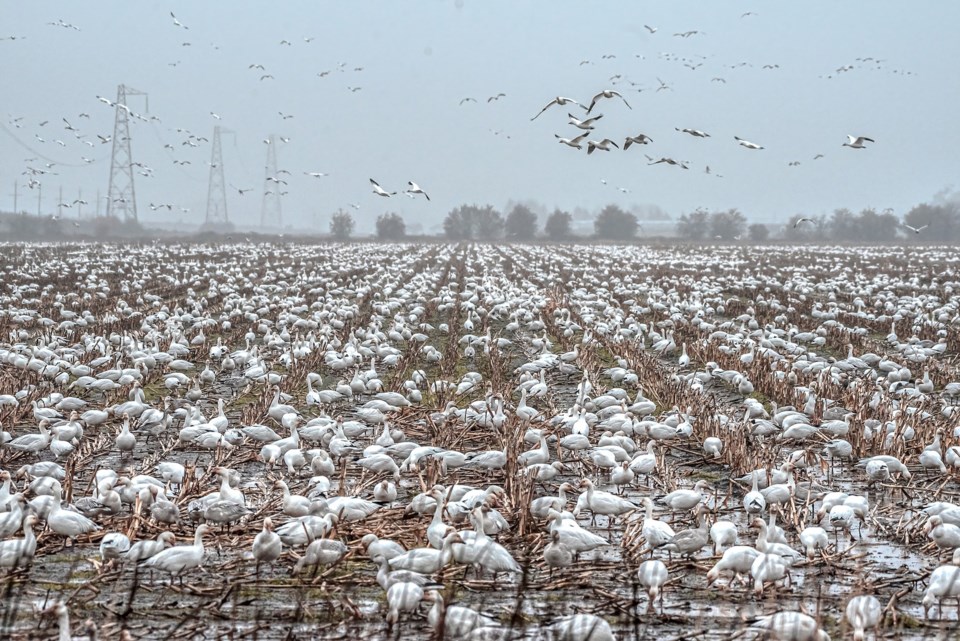 Snow geese in Delta taken on Monday, Nov. 2 north of the overpass on Arthur Drive and Deltaport Road.Olaf Kringhaug

This year Deltans could see a record number of snow geese passing through the Fraser River estuary on their migration cycle and if the number of photos and comments on social media are any indication, residents are in awe of the spectacle.

Dr. Sean Boyd, research scientist with the Wildlife Research Division, Science and Technology Branch, Environment and Climate Change Canada has been researching the birds that visit the Fraser and Skagit deltas for more than 30 years.

Boyd said every single snow goose Deltans have seen in the past few weeks all hail from a place called Wrangel Island, about 140 km off the coast of mainland Russia.

Wrangel Island is Russia's last remaining breeding ground for the Lesser Snow Goose. In the 1950s and 1960s the Wrangel Island spring population was estimated at 300,000 to 400,000 birds, but thanks to climate change, those numbers have more than doubled.

The spring population this year on Wrangel Island hit an all-time high with an estimated 685,000 birds. Estimates from Russian biologists indicate as many as 300,000 goslings fledged and moved off the island, bringing the total to nearly one million leaving the island.

The birds start their approximately 4,500 km journey from Wrangel Island in August or early September and arrive at the Fraser River delta around late September/early October. The birds eat their fill of bulrush rhizomes until mid-December when they gradually move down to the Skagit delta, approximately 100 km south in Washington State.

The geese then stay in the Skagit delta for up to two months before their return to the Fraser Delta by mid-March. Towards the end of April, they leave for their two-month journey back to Russia making stops in Alaska and Russia.

When they get back to Wrangel Island, Boyd said that due to an interesting quirk of soil composure, Russian biologists can tell exactly which birds ate in the Fraser delta.

“Our birds are the only ones that are still feeding in the marsh on rhizomes and when they do that they stick their head in the mud, they get their faces all muddy and the mud has a lot of iron oxides which stains their facial feathers orange,” Boyd said.

Boyd says there are several reasons for biologists to keep apprised of the bird’s tendencies.

“Birds are eating the rhizomes and they can excavate fairly large areas of marsh and they are impacting fairly large areas,” Boyd said explaining that the bulrush marshes on the Fraser estuary have declined by around 50 per cent of what they were 30 years ago, adding sea level rise has contributed to the loss as well.

Another reason is the geese’s impact feeding on local farms, especially in the spring when they return and farmers are growing cover crops. Lastly is the threat the birds pose to aircraft at YVR airport, explaining airports can struggle with keeping young geese out of aircraft flight paths.