An enchanting tale about the wisdom and magic of unconditional love and friendship can be yours for free this Sunday.
Dec 11, 2019 2:35 PM By: Ian Jacques 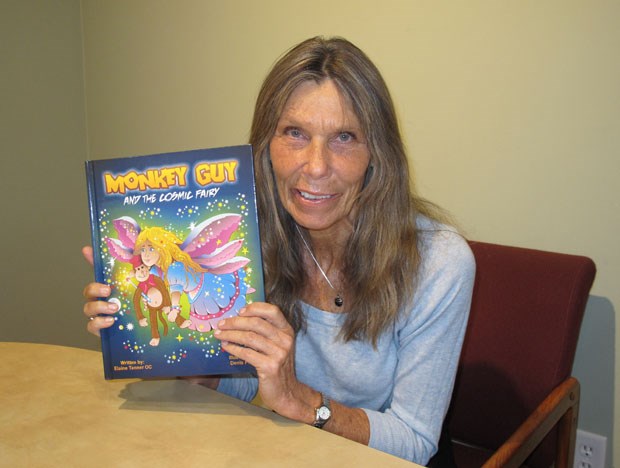 Former Canadian Olympic swimmer, turned author, Elaine Tanner will be gifting copies of her book at a special event at Tsawwassen Springs this Sunday.Ian Jacques/Delta Optimist

An enchanting tale about the wisdom and magic of unconditional love and friendship can be yours for free this Sunday.

Former Canadian Olympic swimmer, turned author, Elaine Tanner, who recently moved to South Delta with her husband John Watt, is offering up her delightful children’s book Monkey Guy and The Cosmic Fairy as a special Christmas gift to the community.

She will be signing and giving away the book, valued at $20, in the Tsawwassen Springs main lobby this Sunday, Dec. 15 from 1 to 2 p.m.

The book, written by Tanner and illustrated by Denis Proulx, was published in 2015.

Over the past few years, Tanner has gifted the books at various events and charity endeavours across the country, including Children’s Wish Toronto and Variety Village.

“Based on my life’s journey, there are a lot of life lessons in it. Kids can relate to it, but it’s also a great read for adults as well,” Tanner said. “It’s about a little stuffed monkey that John gave me for Christmas one year and he is the hero of the book. It really is a message of being loving and kind. We need this desperately in the world right now.”

Nicknamed “Mighty Mouse” as a teenager, she grew up in West Vancouver and was the first Canadian women to ever medal at the Olympics in swimming when she won three medals in 1968 in Mexico City. Two years earlier she won seven medals, including four golds, at the Commonwealth Games, which earned her the Lou Marsh Trophy as the country’s top athlete. She was the youngest ever, at just 15, to win the award.

Among many accolades, she was made an officer of the Order of Canada and was voted one of Canada’s all-time 50 greatest athletes.

Tanner and Watt spend their time between B.C. and Ontario devoted to social issues, including mental health, homelessness, animal rights and the environment. They promote public awareness on water safety issues and drowning prevention.

In 2016, Tanner wrote her second book, Quest Beyond Gold, and is also active on several other blogs and websites where she spreads her messages of hope and a positive future. Readers can see more at: elainetanner.ca, questbeyondgold.ca and teamunderdog.ca.

“John and I published Monkey Guy and The Cosmic Fairy ourselves and the illustrations are done by a fellow from Quebec, so it is a Canadian production,” she said. “I didn’t do it to make money because I felt it was a gift of giving. It was a real joy for me to do.”