Readers will root for Harry 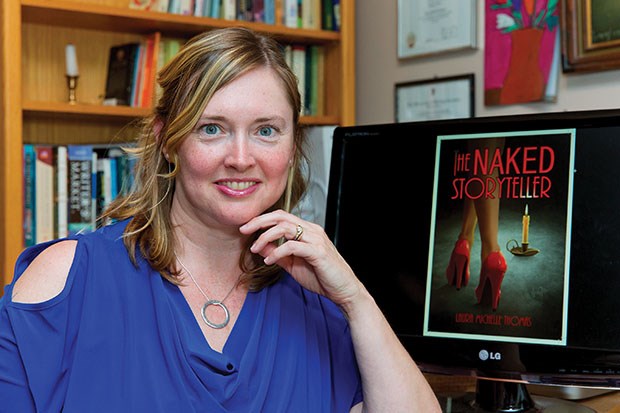 Author Laura Michelle Thomas will be having a launch party for her new romantic comedy, The Naked Storyteller, in September.Gord Goble

Ladner author Laura Michelle Thomas' latest book started out as one thing and ended up being something totally different.

She originally began working on a non-fiction version of a spontaneous storytelling workshop for teachers that she estimates she's done over 50 times for approximately 2,500 people.

That idea morphed into what is now The Naked Storyteller, a novel that's due for release this month.

"It's just a straight up romantic comedy now," she explains.

Harry Tyke, a 52-year-old Grade 6 teacher, is the protagonist of the story, which opens on a professional day on Valentine's Day at a fictional high school in Vancouver.

Tyke attends a workshop and meets Olga, a "creative, free-thinking teacherturned-storyteller." The story covers about a year of Tyke's life and what happens after he takes Olga's storytelling workshop.

"He goes through a rather big transformation," says Thomas, adding that attending the workshop "shakes a lot loose for him."

Tyke, who is divorced and had been shut down emotionally for a number of years, is an outsider who didn't want to be a teacher in the first place. He wanted to be a writer and novelist but was forced into the teaching profession for job security and a pension by way of a family decision, Thomas explains.

"One of the themes tackled in the book is kids letting their parents tell them what they should do with their lives," she says.

Readers will be rooting for Tyke, she says.

"They'll wonder why they are at first, but they will."

She started writing Harry's story in early 2013 and the book also includes a bit of life imitating art as a teachers' strike takes place during the course of the novel.

The cover for The Naked Storyteller is an original piece of art by Ken Rolston, who did a beautiful job, says Thomas.

She describes the cover as an interesting compilation of some key scenes from the novel.

She previously wrote Polly Wants to Be a Writer: The Junior Authors Guide to Writing Published, a young adult fantasy novel/writing guide hybrid.

Thomas says she's been asked how she went from writing Polly to a romantic comedy for adults. She says she doesn't want to be stuck writing for one niche market.

"I want to show off my range," she says. "That matters. I do not want to be pigeonholed as one kind of writer."

There will be a launch party for Thomas' new novel on Sept. 21 from 1 to 3 p.m. at the Chapters store in Metrotown.

RSVP for the launch party by emailing Thomas at laura@laurathomascommunications. com.

For more on Thomas, visit her website at laurathomascommunications.com.