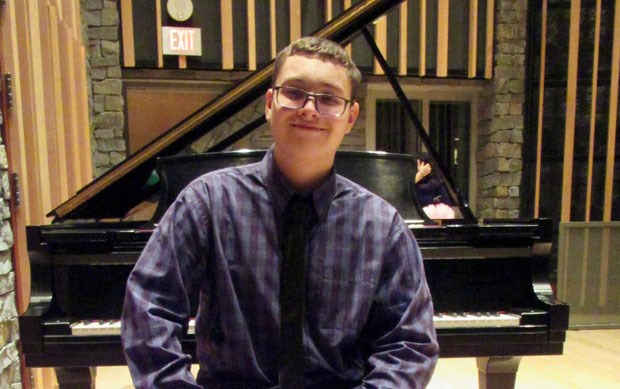 Nicholas Kluftinger has had a busy year.

After co-headlining on the North Delta Family Days entertainment stage in June, the North Delta singer visited the UK for a month on holiday and also shot scenes for his upcoming cover video of the jazz standard When You're Smiling.

In September, he entered Grade 11 at Burnsview Secondary and in October, he recorded the audio track for When You're Smiling with the Edan Stasiuk Quartet at Miles Black Recording Studio in Surrey.

He also competed in the semi-final round of Youth Talent Search B.C. and advanced to the finals with his rendition of Stars from the musical Les Misérables.  In November, he competed in the finals and was awarded with “Most Promising Performer” with his performance of the jazz standard All of Me.

In the process, he won a scholarship to the Perry Ehrlich Musical Theater Summer Program Gotta Sing, Gotta Dance, which he will put to good use next August.

Saving the best for the end of the year, he will be making his debut with the Vancouver Symphony Orchestra as a guest vocalist in the Traditional Christmas Concert Series, with host Christopher Gaze. The festive VSO holiday favourite will perform 10 concerts across the Lower Mainland in the coming weeks. For tickets and show information see: https://www.vancouversymphony.ca/event/a-traditional-christmas-vso/.

In 2020, he will perform again with the VSO in the Jazz Vespers Concert on May 8 at VSO Annex, and hopefully be selected as a performer in next summer's Fort Langley Jazz Festival.

His post-secondary plans include pursuing a vocal jazz studies performance degree and recording an EP of standards and original jazz/adult contemporary music. He also aspires to perform with a big band someday, in the style of Michael Bublé or Frank Sinatra.