Dangerous ideas are forming at Delta Secondary. Staff and students from several classes at the Ladner high school are encouraging discussion and debate on important issues next week at the third annual Festival of Dangerous Ideas from March 9 to 13.
Mar 5, 2020 11:05 AM By: Ian Jacques 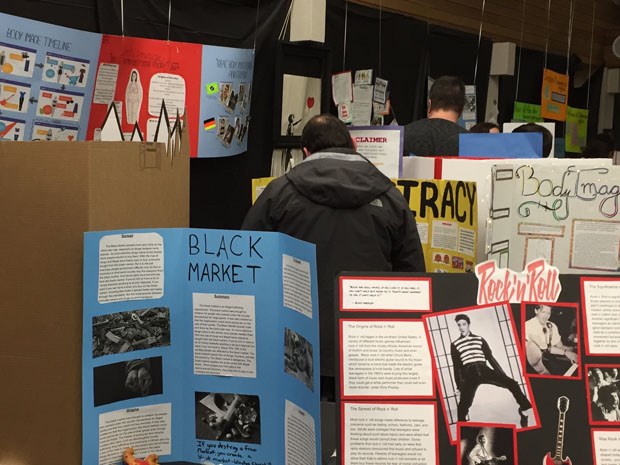 Staff and students at Delta Secondary are encouraging discussion and debate on important issues next week at the third annual Festival of Dangerous Ideas.courtesy Marie Bunce

Staff and students from several classes at the Ladner high school are encouraging discussion and debate on important issues next week at the third annual Festival of Dangerous Ideas from March 9 to 13.

The festival is an idea that originated in Australia in 2009. DSS teacher Marie Bunce introduced it to students in 2018 to challenge them to think critically, ask questions and discuss ideas.

“I have been here at the school for three years now. I moved from Sydney, Australia and one of my favourite things was the Festival of Dangerous Ideas,” she said. “It was an event put on by the Ethic Centre as well as the Sydney Opera House. I attended every year. It was all about the discussion that it could generate.”

Bunce said she thought it was something she could bring to DSS.

“They need to be engaged in ideas and ways of thinking,” she said. “The traditional school focuses a lot on subjects and skills that need to be developed, but something that I feel passionate about in my profession is the ability to help students see things from different perspectives, so why couldn’t we tailor something for high school students.”

The first festival started small with only a few students involved, it grew last year and this year there will be more than 600 students from grades 8 to 12 taking part.

The community has a chance to get involved in the festival too through a series of events.

FODI After Dark on Tuesday, March 10 at 5:30 p.m. is a special event to officially launch the festival. Students will share their ideas and be available to engage in discussion in the school library. It’s a free event, although an RSVP is required.

Also on that evening, at 7 p.m., is the Pacer Pops Music Showcase – the school’s music concert which will tie into the festival by highlighting the dangerous ideas behind each of the songs performed. The concert takes place at Genesis Theatre and is also a free event.

On Wednesday, March 11 there will be a screening of The Body Remembers When The World Broke Open and a panel discussion featuring several First Nations representatives. Light refreshments will be available at 3 p.m. with the panel discussion from 3:45 to 4:30 p.m. and the film screening from 4:30 to 6:30 p.m., all at Genesis Theatre. This is a free event and RSVP is required.

“We have teachers now who have never participated and now they want to try it,” said Bunce. “If we never introduce students to having to think about their thinking, then how will they develop those skills? How will they be able to think critically about the world around them?”

Visit the Festival of Dangerous Ideas website https://dssfodi.weebly.com/ for more information and to RSVP for any events.