During the pandemic the local musicians collaborated with two other artists
Dec 7, 2020 11:00 AM By: Cameron Thomson 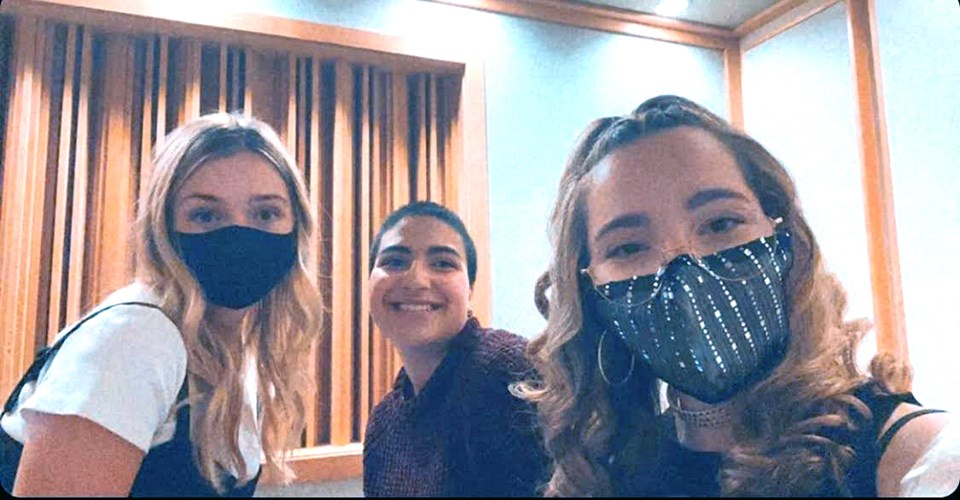 Alexis Corry, Rose Darvish and Despina Gkioulis in the studio recording their "We Are The World" single. Submitted photo

Next Sunday, two Ladner singers will be releasing a new single to raise money to help provide lifesaving resources to frontline workers in Canada.

Corry started singing at age of six in her church choir. A competitive dancer, Corry has also performed in the 2019 Aurora Christmas Festival in Vancouver at the PNE.

According to her mother, Gkioulis has been singing since she was able to speak. She has been involved in school plays and was cast in several semiprofessional plays through the delta youth theatre.

During the pandemic though, the musicians recently collaborated with two other artists singing We Are the World.

Following the single’s release, a portion of the proceeds will be going towards CanadaHelps COVID-19 Healthcare & Hospital Fund.

Corry said recording the single was an exciting experience, being able to work with others and the message the song conveys.

“We are living in such difficult times and unity is needed. I find music is a way to communicate to others and it couldn’t have been a better song to express that,” Corry said. “I hope the song will connect with people and touch them in a way that brings a sense of we are in this together.”

Gkioulis says she was inspired to contribute to the project for the experience of working with her peers and where the proceeds would be going towards.

The single, which you can watch the music video for on YouTube under the title ‘Canadian Girl Power - We Are The World’, will be released on Dec. 13.