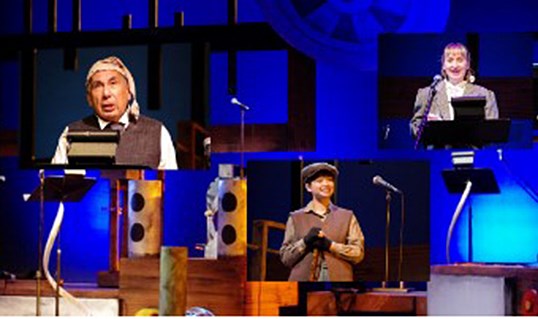 Working around the pandemic, Metro Theatre's A Christmas Carol- The Radio Play is now available for viewing online until Jan. 3 Metro Theatre

Metro Theatre has taken its holiday production online as it works around COVID-19 pandemic restrictions.

A Christmas Carol- The Radio Play is now available for viewing online until Jan. 3 by purchasing a password through Metro’s website: https://metrotheatre.com/.

The Charles Dickens holiday classic comes to life as a live 1940s radio broadcast. The magic of live sound effects and musical underscoring sees a handful of actors bring dozens of characters to the stage.

As the familiar story unfolds: Three ghosts take Ebenezer Scrooge on a thrilling journey to teach him the true meaning of Christmas. A charming take on a family favorite that will leave no one saying “Bah Humbug!” The play is directed by Chris Adams and features David Adams as Scrooge.

As a non-profit society, much of Metro’s comes from ticket sales, so the cancellation of its Christmas show at its Marine Drive venue will have a significant impact on its organization. The online availability will at least generate some revenue and also not let the production go to waste with so many putting their heart and soul into it including co-producer Catherine Morrison and lighting designer Les Erksine, both longtime Ladner residents.

“Six actors are narrators and characters from the Dickens’ novel. Because it is done in the style of a 1940’s radio play all the sound effects (and some are very funny) are done by the actors themselves,” said Morrison. “I think it will be an entertaining show for all ages.”