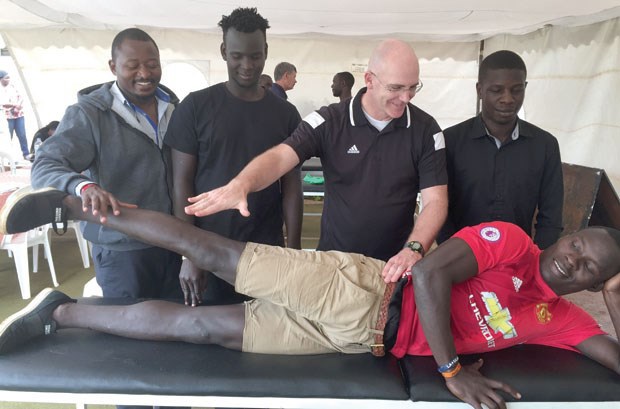 Travis Wolsey during a trip to Uganda in 2018. The Tsawwassen resident and owner of Sungod Physio is among the recipients of the Canadian Physiotherapy Association's Medals of Distinction. Submitted photo

Physiotherapist Travis Wolsey has been recognized by his peers for his outstanding work.

The Tsawwassen resident is among the recipients of the Canadian Physiotherapy Association’s Medals of Distinction. The award recognizes more than 100 individuals from across the country who have had a significant and meaningful impact on the physiotherapy profession from 1920-to-2020.

The Medals of Distinction were developed in response to overwhelming demand from the CPA membership for a unique recognition of the association’s 100th anniversary in 2020. COVID-19 put the celebration on hold for a year.

“On behalf of the CPA’s Past Presidents’ Council, I am honoured to recognize over 100 CPA Medals of Distinction recipients,” said Viivi Riis, President of the Canadian Physiotherapy Association. “They represent leaders, role models and innovators whose impact on the profession over the last century cannot be understated. As we look ahead to the next 100 years of physiotherapy driving the health and mobility of Canadians, we must take this moment to reflect on the path paved for us by our leaders in the profession, and celebrate the leaders still to come.”

Wolsey, a UBC graduate and former football standout, put his Human Kinetics and Physical Therapy degrees, along with various diplomas, to work when he launched Sungod Sports Orthopaedic and Physiotherapy Clinics. Wolsey and his team now have established locations at Tsawwassen Springs, the Ladner Leisure Centre and Sungod Arena.

The South Delta Secondary graduate is also clinical instructor with CPA's orthopaedic division and has had speaking engagements with PABC, Sport Physio BC, Allan McGavin Sports Medicine Conference and BC Podiatry Association.

Wolsey was selected to be a part of the host medical team for the Ice Hockey venue at the 2010 Olympics and 2006 World Junior Hockey Championships in Vancouver. He has been the team physiotherapy consultant with the Western Hockey League’s Vancouver Giants hockey team since 2005 and has enjoyed helping junior players progress into pro hockey careers. His impressive list of clients include Brendan Gallagher (Montreal Canadiens), Milan Lucic (Calgary Flames) and James Paxton (Seattle Mariners).

In 2018, he was asked to be part of a Canadian entourage that visited Uganda to access athletes and educate national team staff.

Delta cannabis greenhouse positioning for 'developing landscape'
May 31, 2021 10:30 AM
Comments