Outreach workers will make pick ups from stops at Lion's Park in Port Coquitlam, Lafarge Lake in Coquitlam and other areas to ensure no individual is left out in the cold;. the shelter will be open nightly from 8 p.m. to 7 a.m. during the ongoing extreme weather alert
Feb 13, 2021 4:41 PM By: Diane Strandberg 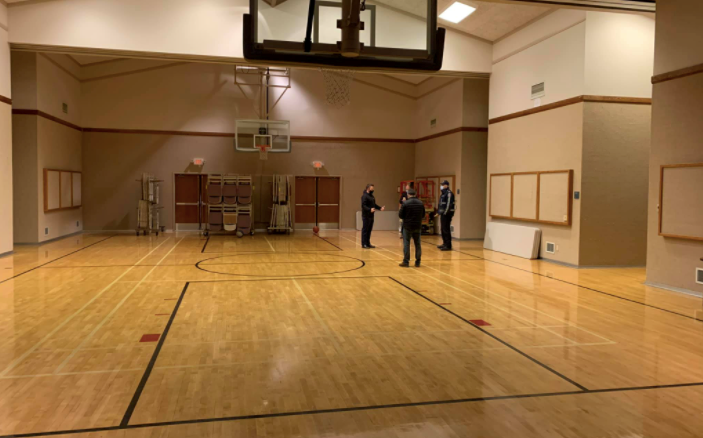 Officials considered at least two Coquitlam churches before deciding on opening a 20-bed shelter at the Church of Jesus Christ of Latter-day Saints in Coquitlam at 3345 Robson Dr. An extreme weather alert was called Saturday morning, prompting the opening of the beds.Facebook/Richard Stewart

A 20-bed emergency shelter is opening in Coquitlam — just in time for the region’s first significant snowfall of the year.

Phoenix Society will be operating the extreme weather shelter in Coquitlam starting Saturday, Feb. 13 as temperatures continue to drop across the Lower Mainland.

The shelter — a partnership between Phoenix Society, the city of Coquitlam and BC Housing – will be run out of the Church of Jesus Christ of Latter-day Saints in Coquitlam at 3345 Robson Dr. It will be open nightly when extreme weather alerts are activated from 8 p.m. to 7 a.m. , providing 20 mats for both men and women.

The news comes as snowfall blanketed the Lower Mainland Saturday morning, and until this point, there were no extreme weather beds available in all of Tri-Cities.

After a community outcry and media reports on Wednesday, a number of churches offered their space for a shelter.

The Church of Jesus Christ of Latter-day Saints was eventually chosen.

It is open until further notice following an Extreme Weather Alert being made Saturday morning at 10 a.m. for the Tri-Cities municipalities of Coquitlam, Port Coquitlam and Port Moody.

A Phoenix Society spokesperson said the extreme weather response was the result of the community working together.

“There was an incredible effort put in on Friday. Within 24 hours, a solution was found to provide shelter for those who find themselves out in the cold amid this cold snap in Tri-Cities. Thank you to the City of Coquitlam, BC Housing and all of the community partners who worked quickly to make this happen,” stated Keir Macdonald, CEO of Phoenix Society. “These beds could be the difference between life and death for those who are homeless and living outdoors during extreme weather. Phoenix Society is thankful this partnership could be achieved to help provide warmth and potentially save lies.”

“Phoenix Society also thanks the Church of Jesus Christ of Latter-day Saints for offering their facility to provide shelter to those who are vulnerable,” Macdonald adds.

Hope for Freedom is helping with transportation to and from the Coquitlam Extreme Weather shelter, which will begin at 7:30 p.m. on Feb. 13, with stops at Lion's Park in Port Coquitlam, Lafarge Lake in Coquitlam and other areas to ensure no individual is left out in the cold.

Coquitlam Mayor Richard Stewart said he has received calls over the past few days from several churches in Coquitlam offering unused space for emergency shelter, following media coverage highlighting the absence of extreme weather beds in the community.

“I want to thank all who were involved in this work,” the mayor wrote online. “Still much to be done to support the homeless and those struggling with mental illness and addictions, but at least our local population will be offered a warm place overnight and a couple of meals.”

The opening of the new shelter is part of the provincial Extreme Weather Response (EWR) program provides shelter indoors for those who are unhoused when weather conditions become dire.

The EWR program is a provincially funded initiative that officially runs from Nov. 1 to March 31. The beds, often mats on the floor of a building, open “to provide additional temporary emergency shelter spaces during periods of extreme winter weather which threaten the health and safety of individuals experiencing homelessness,” according to BC Housing.

Beds are called to open if temperatures are at or below 0 degrees Celsius, if there if significant snow or rain, or significant windstorms that “may present danger to persons living in wooded areas and/or makeshift shelters. Wind, rain and snow weather alerts can also launch an opening.