Hoping for some mild fall weather this year?

Vancouverites looking to enjoy a lengthy stretch of cozy "sweater weather" without a jacket this fall may find things a bit chilly and damp.

AccuWeather has released its Canada-wide fall forecast for 2021 and finds that La Niña conditions will usher in wetter, stormy conditions on the west coast (more like wet coast).

"La Niña conditions are anticipated this fall, which will likely play a key role in the average weather conditions across portions of Canada during this upcoming season and even perhaps into winter," said AccuWeather Senior Meteorologist Brett Anderson.

La Niña conditions are defined as "the appearance of cooler than normal waters in the eastern and central Pacific Ocean," as in the waters off B.C.'s coast. Sometimes also referred to as "a cold event," the climate pattern is generally considered to be the opposite of El Niño, and is usually great news for skiers and snowboarders hoping for a season full of champagne powder.

La Niña is thought to occur due to increases in the strength of the normal patterns of trade wind circulation.

And the aforementioned conditions will play a significant role along the Pacific coast of Canada this autumn. Report authors note that the weather phenomenon will influence the strength and position of the jet stream across North America.

"The jet stream is like a pathway for storms, thus we are expecting a stormier fall, especially across the western half of British Columbia, with above-normal rainfall," Anderson explained.

Snow may appear earlier than normal in the coastal mountains of British Columbia and farther east into the Canadian Rockies, which stretch into Alberta, he added. 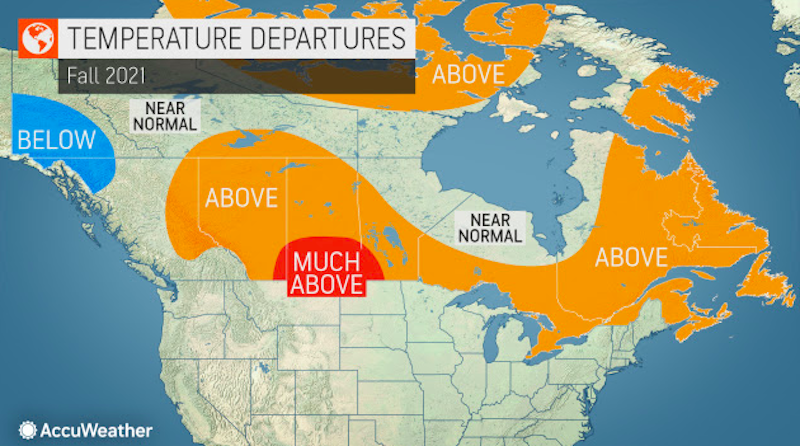 With files from Megan Lalonde

Thunderstruck: Here's why epic thunderstorms are so rare in Vancouver
May 19, 2021 4:01 PM

Will there be another scorching hot heat wave in Metro Vancouver this summer?
Jul 6, 2021 3:57 PM
Comments