An alert DPD officer rescued this stolen puppy while arresting two suspects on a number of charges
Jan 21, 2021 11:43 AM By: Ian Jacques 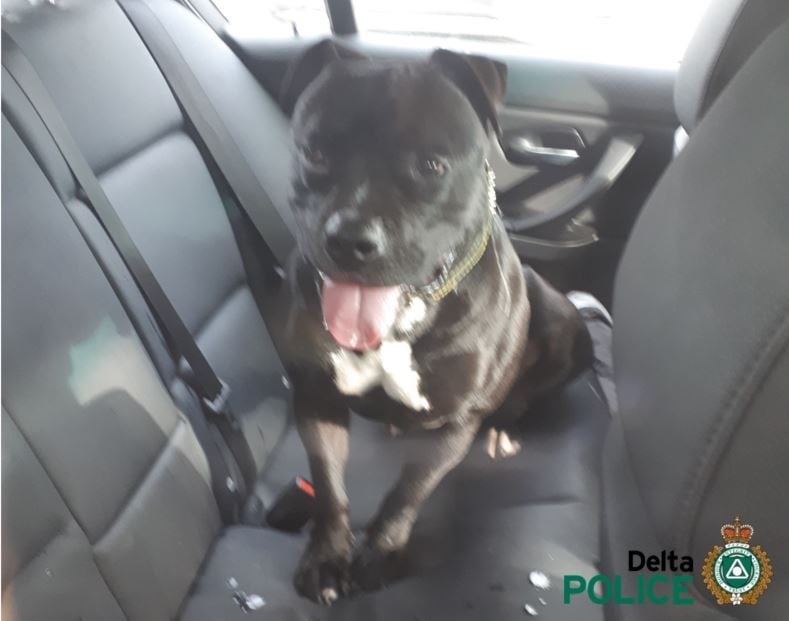 An alert Delta police officer arrested two suspects for stolen property and other offences and also rescued this puppy who was also reported stolen.Delta Police/Contributed

Another recent case of ‘no call too small’ for Delta police helped nab two offenders and recovered a stolen puppy.

According to a post on the department’s Facebook page Thursday morning, one of their officers was parked at a mall in South Delta recently, and noted a vehicle that seemed out of place. He checked the licence plate, and learned the registered owner had conditions not to be at a nearby store.

“When the vehicle drove off our officer followed, and conducted a stop,” said DPD. “The driver provided the officer with his name, but said he didn’t have a licence on him. Instead he fumbled through a wallet which contained a large number of credit cards and gift cards – which did not match the driver’s provided name.”

The driver ended up being arrested for possession of stolen property and the passenger was arrested on an outstanding warrant from another jurisdiction. Because he was being arrested, the passenger was searched and a prohibited weapon was found on him, and since the driver exhibited signs of drug consumption – he was required to perform a roadside Standard Field Sobriety Test, which he failed.

“Our officer now had plenty of paperwork to do, but his attention was caught up by a dog in the back of the vehicle,” said DPD. “The dog didn’t seem comfortable in the vehicle, or at ease with the driver and passenger. The officer, a former dog handler, opted to contact the Delta Animal Shelter and asked them to check to see if the dog could be identified. As it turned out the dog as well had been reported stolen….from a homeless person in another jurisdiction. The Animal Shelter is now working with its counterparts to locate the dog’s rightful owner.”

570
Here's what real estate prices look like in the City of Delta
538
Your credit report may be wrong; here’s what to do about it
495
B.C. premier throwing cold water on COVID-19 vaccine clinic for North Delta
485
Ladner Baseball hosting used equipment drive for start-up league in Mexico
447
East Ladner motel has been buzzing with filming activity