It was a painful experience for the little critter. A young female skunk was discovered in what's being described as an inherently inhumane trap in South Delta Wednesday, prompting an animal advocacy group to once again call for changes to the law.
Aug 6, 2015 8:42 AM By: Delta Optimist 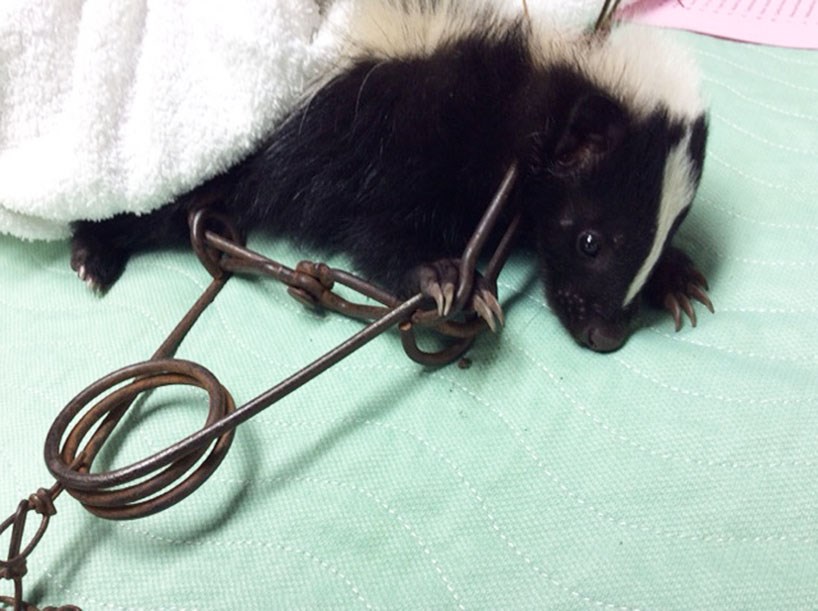 This young female skunk had to be rescued after getting stuck in a trap in South Delta.submitted

It was a painful experience for the little critter.

A young female skunk was discovered in what's being described as an inherently inhumane trap in South Delta Wednesday, prompting an animal advocacy group to once again call for changes to the law.

A passerby discovered the juvenile skunk crawling and stuck in a trap along  a stretch of River Road. The Delta Fire Department and then animal control officers with the Delta Community Animal Shelter were called.

It wasn't easy, but the animal control officers managed to transport the wounded animal to the local shelter. Volunteers with the Burnaby-based Wildlife Rehabilitators Association of B.C. then came to take the skunk to the association's facility, where they managed to remove the trap and are now treating the animal.

Saying the young skunk was extremely stressed but seems to be recovering well, Adrian Nelson with the Association for the Protection of Fur-Bearing Animals said the powerful, body-gripping Conibear trap that snagged the skunk is supposed to kill animals quickly by snapping their necks.

However, what often happens is that another part of the animal's body will get caught, making it suffer.

"Too often we are hearing of incidents where animals, both wild and domestic, are being caught, terrified and injured in these inherently inhumane traps," said Nelson. "There is never a legitimate reason for this kind of cruel behaviour, particularly when non-lethal, truly humane solutions to end conflict or nuisance-type behaviour exist."

The association says despite petitions, letters and e-mails, Forests, Lands and Natural Resources Minister Steve Thomson has refused to meet and discuss non-lethal solutions to conflict between people and wildlife.

Noting they fortunately have not had many calls for animals caught in traps, Delta Community Animal Shelter manager Sarah Jones said what's more worrisome here is people electing to purchase so-called humane traps that have the animals lured and captured.

She said the problem is that people setting traps to rid their properties of animals like raccoons or skunks don't remember to constantly check them. A captured animal could end up trapped for days or even longer, suffering from hunger or dehydration or become vulnerable to predators, she said.

"It's a bit concerning to me personally that they can sell those because they are not used appropriately, even though they are considered humane traps," Jones said.