VIDEO: A B.C. couple enjoyed their coffee with a moose this week 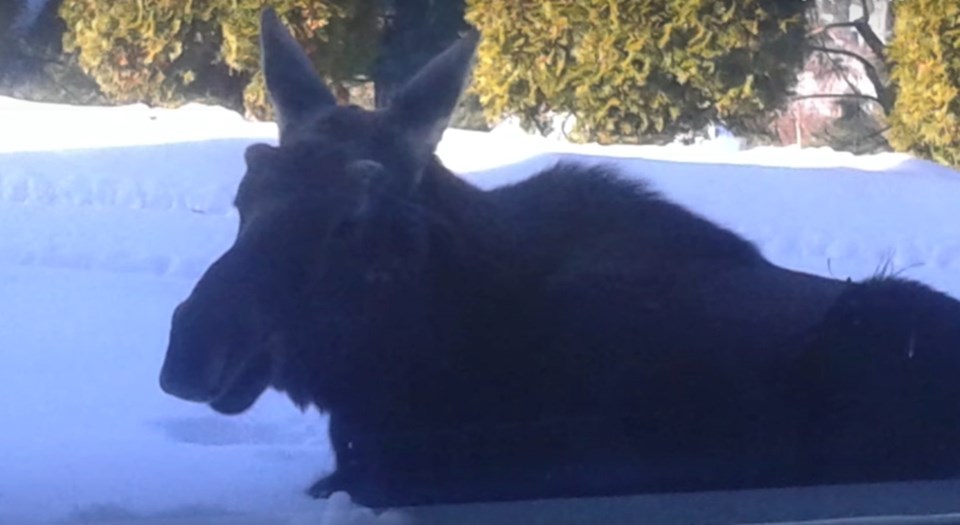 Thursday morning, Glen and Janis Brown were having their morning coffee at their home on Toovey Road when they noticed the local moose outside their window. (via Castanet)
A moose appears to be quite comfortable in Kelowna's Black Mountain neighbourhood, after he was first spotted Tuesday.

Thursday morning, Glen and Janis Brown were having their morning coffee at their home on Toovey Road when they noticed the local moose outside their window.

“This morning, Janis, my wife, and I had coffee and he bedded down right outside our living room window, so we were within five or ten feet from him,” Glen told Castanet, as the moose continued to sleep in his yard.

“He's a little male. He's got two-inch little lumps of horns popping out of his head, so he's a real young guy, probably about 400 pounds ... he looks in really good shape.”

Conservation officer Terry Myroniuk says moose will sometimes come down from higher elevations when the snow becomes too deep up high.

“They do have longer legs than deer, so they do better than deer do with snowfall, but just like you or I, there's a certain level where there's just too much snow to walk easily and then it makes them vulnerable to predators,” Myroniuk said.

He says when animals like moose are hanging around residential areas, it's important to give them lots of room.

“It's not necessarily dangerous, but certainly if one was to invade its personal space, or make it feel threatened, then it could become defensive which could potentially make it a threat,” he said. “They view dogs as threats to them too, so we would ask people to keep themselves and their pets away from the moose.”

“If it's not really creating any problems, we don't really want to intervene,” he said. “The options available to move animals, including drugging and relocation, it's actually really quite hard on the animals.

“There's certainly threats to the animal's safety in doing so ... so that would be a last resort.”

Myroniuk says they're hoping the moose will move on once the weather improves a bit. That might be a few days off still though, with more snow forecast to fall in Kelowna through the weekend.