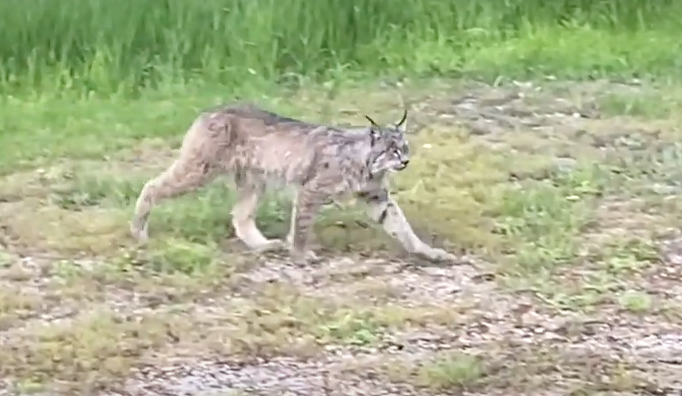 Roy Bouman had a rare experience recently when he spotted a lynx wandering past the RV he was staying in.

The Vernon man was at Fairhaven Ministries Retreat off Silver Star Road when the wildcat came “strolling out of the bush.

“He just walked through our site without a worry in the world. We tapped on our window, but didn’t pay much attention to it - just looked. When he started to walk you could see the strength, the power, in his back legs. In 30 years, I’ve only seen a Lynx one other time but never this close,” said Bouman.

Lynx prefer to live in wooded areas and the reclusive mid-sized cat is occasionally spotted in the Okanagan.

According to Wikipedia, Lynx have a short tail, characteristic tufts of black hair on the tips of their ears, large, padded paws for walking on snow and long whiskers on the face. Under their neck they have a ruff which has black bars resembling a bow tie, although this is often not visible.

Body colour varies from medium brown to goldish to beige-white, and is occasionally marked with dark brown spots, especially on the limbs.

All species of lynx have white fur on their chests, bellies and on the insides of their legs, fur which is an extension of the chest and belly fur. The lynx's colouring, fur length and paw size vary according to the climate in their range.

As climates get colder and more northerly, lynx have progressively thicker fur, lighter colour, and their paws are larger and more padded to adapt to the snow. Their paws may be larger than a human hand or foot.