Years of refining his craft -- while teaching, mentoring and giving back -- has earned a top honour for a South Delta chef.
Mar 15, 2020 6:05 PM By: Ian Jacques 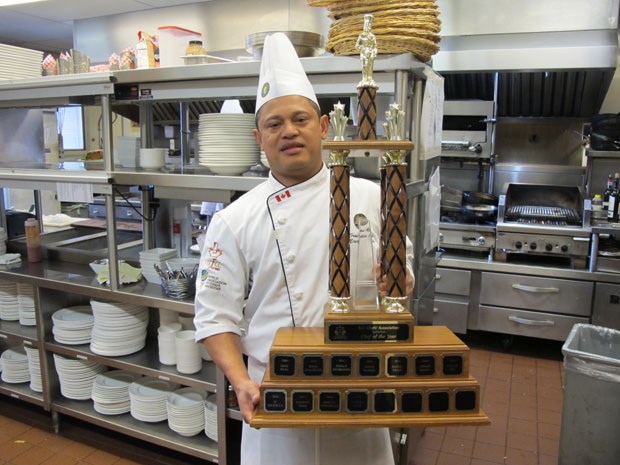 Beach Grove Golf Club’s executive chef Froilan Alejo was presented with Chef of the Year for 2020 at the recent BC Chefs’ Association meeting.Ian Jacques/Delta Optimist

Years of refining his craft -- while teaching, mentoring and giving back -- has earned a top honour for a South Delta chef.

Beach Grove Golf Club’s executive chef Froilan Alejo was presented with Chef of the Year for 2020 at the recent BC Chefs’ Association meeting.

Alejo has been at Beach Grove for the past eight years, in the profession for more than 25 and has been on the association’s board of directors for the past five years.

He said he and his wife were at the meeting and totally unaware he would receive the award.

“When they started out on stage and gave a bit of a bio on the award recipient my wife said I think they are talking about you,” Alejo recalled. “Then when they said my name I was speechless. I was just so thankful, honoured and humbled that they would recognize me this way. To represent Beach Grove Golf Club and to be recognized this way is great for the members and also for the club.”

Alejo went to culinary school at VCC and graduated as an apprentice for the Beach House in West Vancouver.

Over the years he has worked for Monk McQueen’s, Paramount Hotels, Chateau Whistler and four years travelling the world for Holland America cruise lines. When he returned to the Lower Mainland he worked for various golf courses, opened a restaurant in Aldergrove, which he later sold, and later opened a Frankie’s Italian Kitchen with another group of chefs in Vancouver.

“This opportunity came along and they loved what I could do and I’ve been here for the past eight years,” he said. “I have loved to travel the world, work at different places, learning and refining my passions and explore food. The only way to improve your skills is to teach and learn. It’s very give and take.”
It’s that give and take philosophy that Alejo said is a big reason why he continues to be so passionate about the industry.

“It’s important to give back to the young chefs because we are getting old. I want to see these young chefs get better and better,” he said. “I learn as much from them as they learn from me.”

“I myself have been in the food and beverage industry prior to me being GM here and it’s refreshing to see an individual in his position investing so much time in helping create a passion for the industry,” said Hugill. “He has always had a different attitude – spend time with the staff, bring the young chefs up and he is so skilled in what he does.”