Big influx of housing coming for City of Delta corner 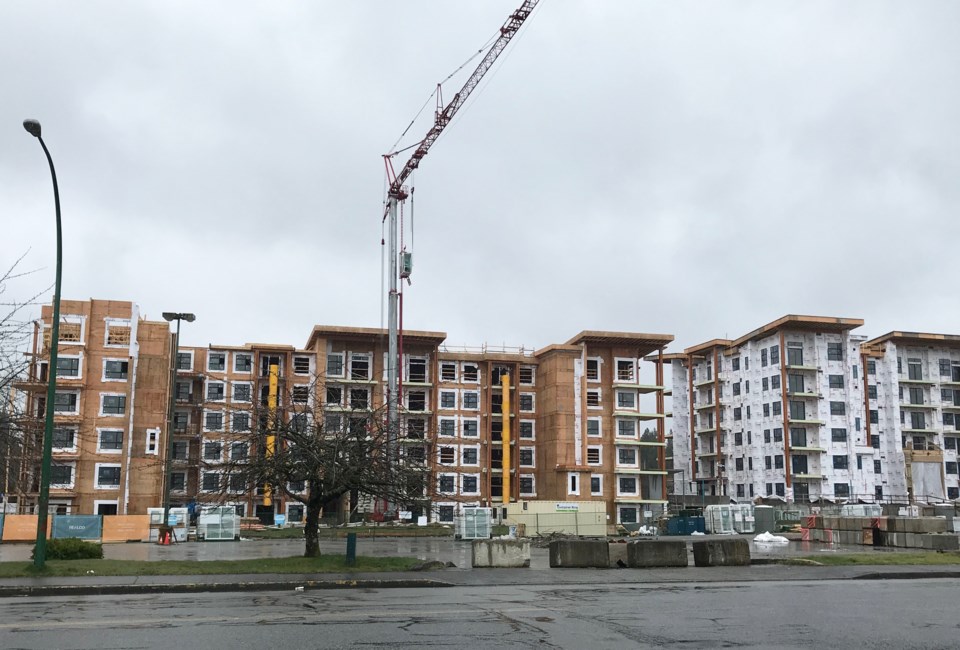 High-rises aren’t being pitched for any of the properties in the area of 70th Avenue, Scott Road and Nicholson Avenue, but many residential units could still be on the way. Sandor Gyarmati/Delta Optimist

It’s a corner set to have one of the City of Delta’s highest residential densities.

The properties at Scott Road and 70th Avenue, adjacent to Scottsdale Mall, includes a major development application to be submitted this year for one and another already submitted for another project, while a condominium complex is now under construction next door.

The 182-unit Scott & Nicholson complex at 6950 Nicholson Rd., facing Scott Road, is well underway where a strip mall was located.

Once completed, that development will comprise two buildings with one and two-bedroom units, while the project also includes six townhomes.

The city last fall also received an application for a new six-storey mixed-used development next door on a vacant lot along Scott Road, fronting the former North Delta Inn site.

That development application, if approved, would see 84 condominiums on the lot, which once was home to a gas station.

A planning department report notes the property has an Official Community Plan (OCP) designation intended for multiple-family residential as the primary use and retail and office commercial, recreation, cultural, public and open space as secondary uses, although commercial use is optional.

Meanwhile, a new development plan is being pitched for the North Delta Inn property.

The owners of that property have submitted preliminary plans for a proposed mixed-use development, a proposal that was discussed at a recent council workshop.

That application would include three, six-storey buildings with a total of 243 residential units as well as 11,712 square-feet of ground level commercial space.

The owners are to further revise the plans and are required to hold a public information meeting by May 30.

A complete development application has to be submitted to the city by Sept. 30.

The owners would be allowed to continue having their temporary licence for a liquor store at the site until 2022.

The Mayor's Housing Task Force for Scott Road identified that area of Scott Road as mainly residential, up to a maximum of six storeys with some neighbourhood commercial opportunities.

A new planning department report to council outlined a public consultation process which is to be undertaken to update North Delta’s OCP based on the task force’s recommendations.