Big rally for Delta Hospice gets some good news

Hundreds of residents opposed to the actions of the Delta Hospice Society board took part in a protest walk at Paterson Park Saturday morning.
Jun 13, 2020 12:55 PM By: Sandor Gyarmati 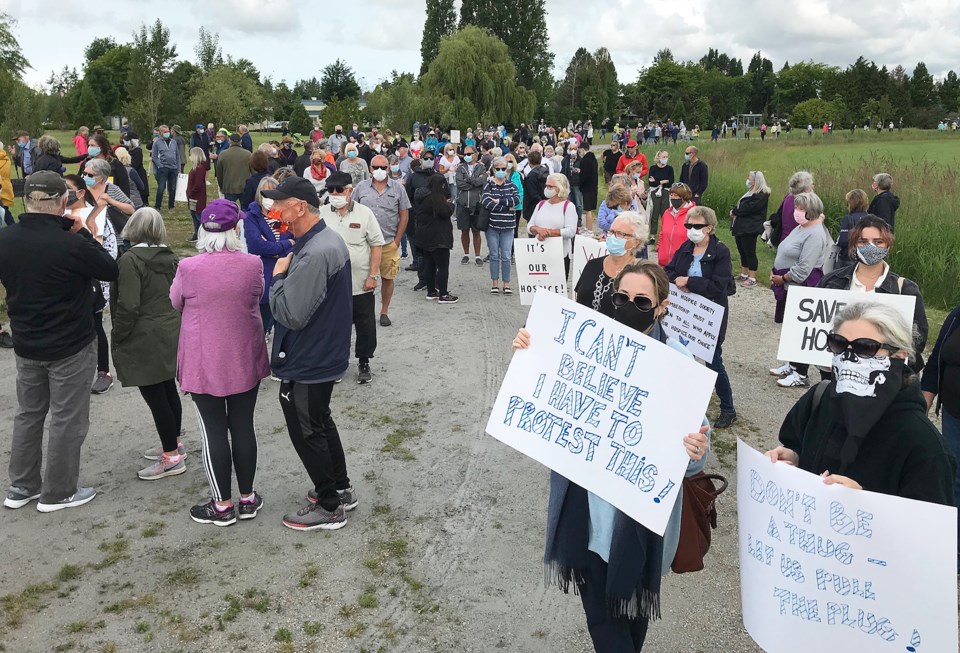 Hundreds of residents opposed to the actions of the Delta Hospice Society board took part in a protest walk at Paterson Park Saturday morning.

Dubbed “Walk for Choice at Delta Hospice” by its organizers, the event was aimed at seeing the facility “returned to the service of all Delta citizens.”

Reminded about keeping their social distancing, many carried placards and signed up for membership to the society, which has been a hot button issue with the current board already reportedly having rejected hundreds of applications by Delta residents.

The large gathering got immediate good news during opening speeches with an announcement a court petition against the board was successful, blocking a special meeting scheduled for Monday to change the society to a Christian society, and that the city will revoke the tax-exempt status of the DHS thrift shop.

“Over the last few months, we have heard loud and clear that the people of our community are united in their support of an inclusive hospice that provides compassionate end of life services for everyone, regardless of religious beliefs or personal moral convictions,” Delta South MLA Ian Paton told the Delta Optimist. 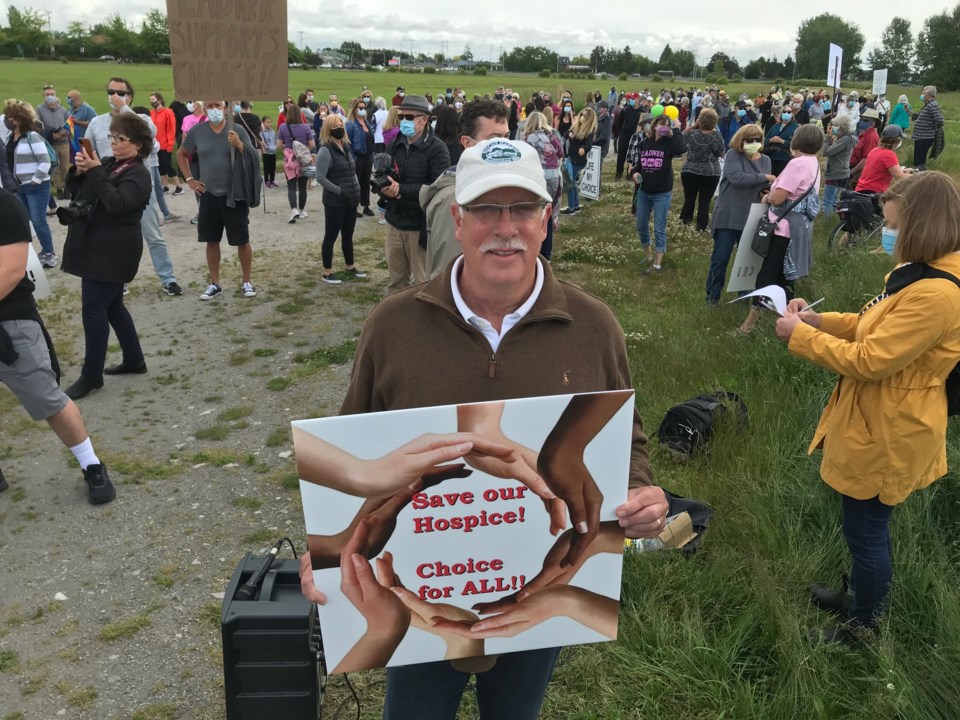 “I stand in solidarity with the hospice staff, volunteers, and donors who have publicly denounced the cynical gamesmanship of the current hospice board. It’s time for (board president) Angelina Ireland to do the right thing and resign as chair of the board and give this hospice back to the people of Delta,” he said.

Paton told the rally that the last time he can recall such a big community stand was when hundreds took part in a “Hands Around the Hospital” event to protest Fraser Health’s service cuts to the local hospital.

Former board member Chris Pettypiece, one of the organizers of Saturday’s event, announced his petition with Sharon Farrish and former board president Jim Levin to the B.C. Supreme Court to block the board’s upcoming meeting was successful, describing it as a victory for the community.

Also among the speakers was Mayor George Harvie, who said there’s concern the hospice’s thrift shop in Tsawwassen could end up being sold, so a report will be brought forward at council’s meeting this coming Monday to strip the shop of its tax exemption for 2021.

“We will not tolerate losing the opportunity for choice in our precious Delta Hospice,” Harvie said.

Noting the province will be asked to audit the society’s finances and Fraser Health will be asked to conduct regular inspections of the facility to investigate staff concerns, Harvie said it’s important for the community to regain control of its hospice.

“Let’s all work together to get those memberships up. And, I just have the following for the current board and Angelina Ireland: Do the right thing, resign on Monday,” he added, receiving a jubilant applause. 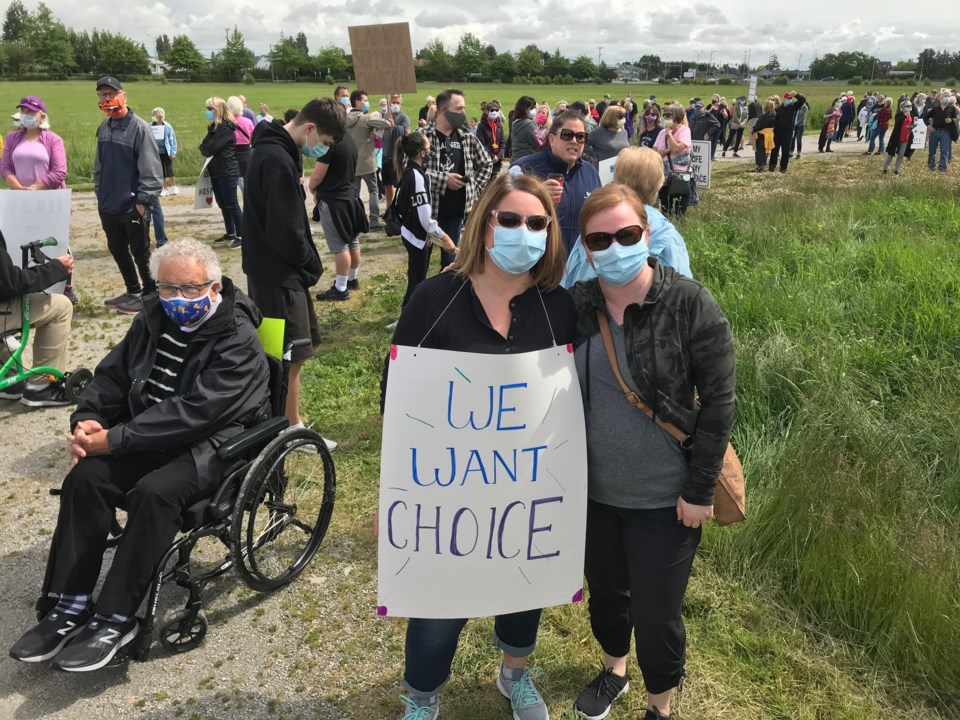 The community the past few weeks has been abuzz with irate residents complaining they’ve been denied membership to the society, which saw a large number of late sign-ups by opponents of the legal procedure medical assistance in dying (MAiD) just prior to a heated annual general meeting late last year.

Those newly signed members at that AGM, many reportedly non-Deltans, were enough to change the balance of power of the board, which promptly cancelled a policy by the previous board to allow MAiD at the Irene Thomas Hospice in Ladner.

The new board is accused of pushing the religious viewpoint of a minority while “stacking the deck” by keeping everyone else out. 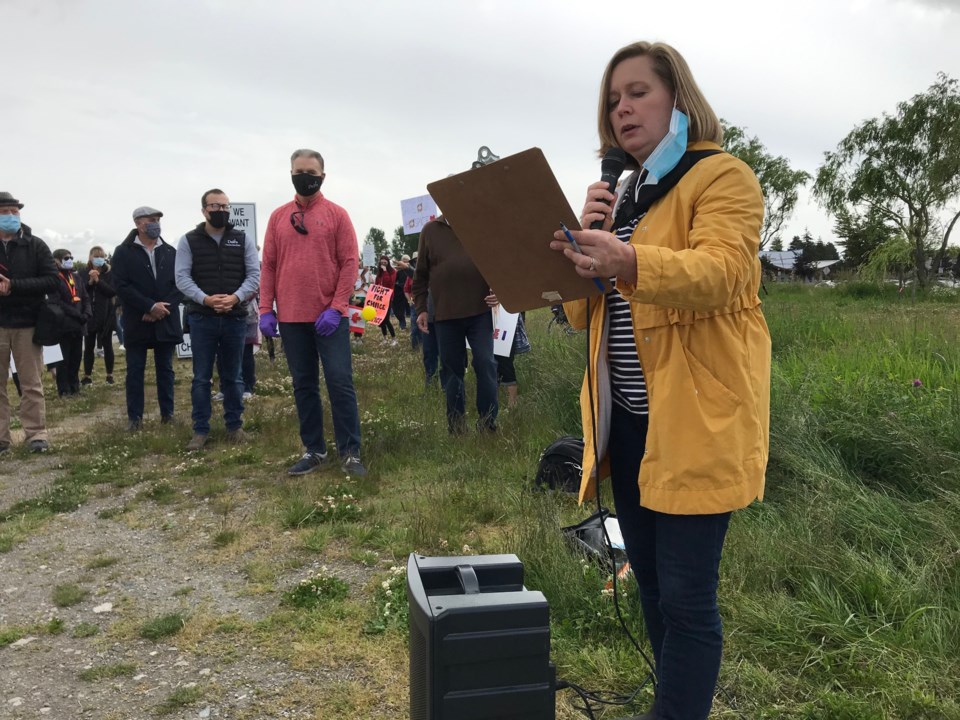 In a recent interview with the Optimist, Ireland said the special meeting was to ask the membership whether it wants to formally affirm the Christian principles hospice care is based.

Accusing the province of trying to steal the local hospice, she also said the intent of the Delta Hospice was never to be a euthanasia facility, and that anyone of any faith can still access its services.

Even if control of the board is changed, the DHS could still find itself out of the picture next February.

Health Minister Adrian Dix this year announced the province has exercised its right to notify the society that the province has given one-year’s notice, without cause, the society’s funding will end. DHS will also not be permitted to provide palliative care.

Asked in an earlier interview if things could change if a new board was elected and willing to offer MAiD, which non-faith based hospices are mandated to provide, Dix indicated his government would still terminate the contract. 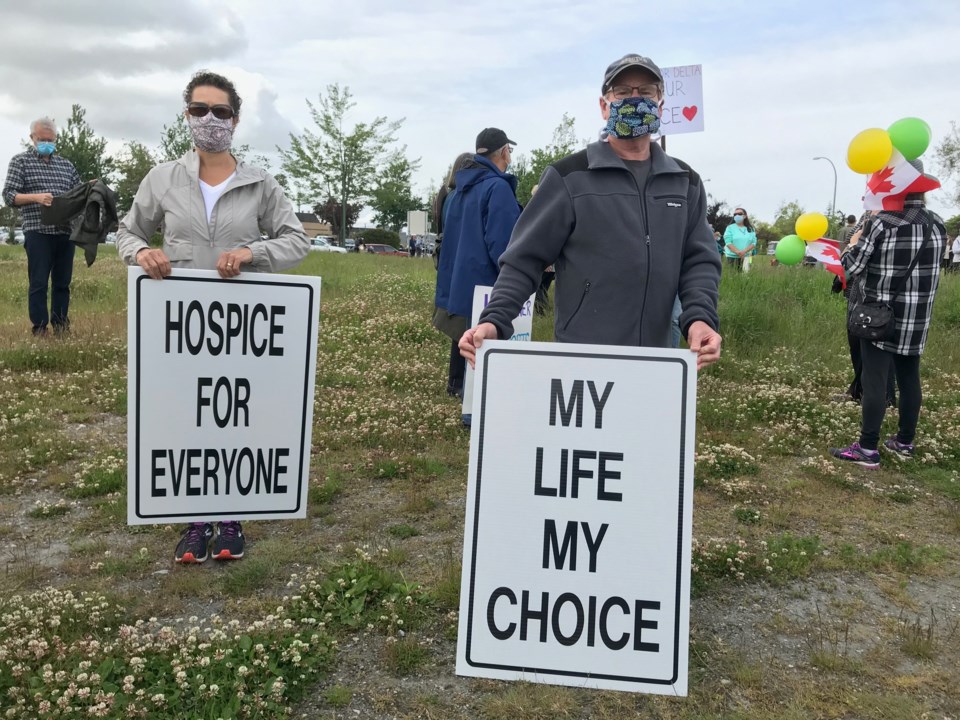 “I was asked at the press conference maybe people from the other side of the debate should get a big number of people and take it back over, but that wouldn’t be any good either. This is not the way we should make decisions… I believe that most people in Delta agree with this, that we shouldn’t be setting up an ongoing fight over controlling Delta Hospice Society and individuals’ right to access a legal and publicly available facility. That’s not how we should do these things,” Dix explained.

He also suggested the hospice society’s $1 annual lease with Fraser Health stipulates a publicly-funded facility must operate at the site, so the current buildings don’t have to be shuttered and may instead be turned over to public management.

He assured that Delta will continue to have hospice beds despite the provincial government removing the DHS from the picture.

Dix, who recently met with Harvie and other Delta officials, opted not to get involved in the current membership fray, recently saying there were remedies people could take if they believe a group is not adhering to the Societies Act.

In a letter to the Optimist this week, John Thomas wrote that while he strongly disagrees with Fraser Health's and the Minister of Health's approach and insistence that Delta Hospice should be obliged to provide MAiD, he also cannot accept that patients entering the hospice for palliative care who later decide they want MAiD be forced to transfer out of the Hospice for the procedure.