In response to a spike in local crime, a Tsawwassen man has reinvigorated the neighbourhood block watch program which now boasts 140 members. In September, P.A.
Nov 24, 2020 6:00 PM By: Cameron Thomson 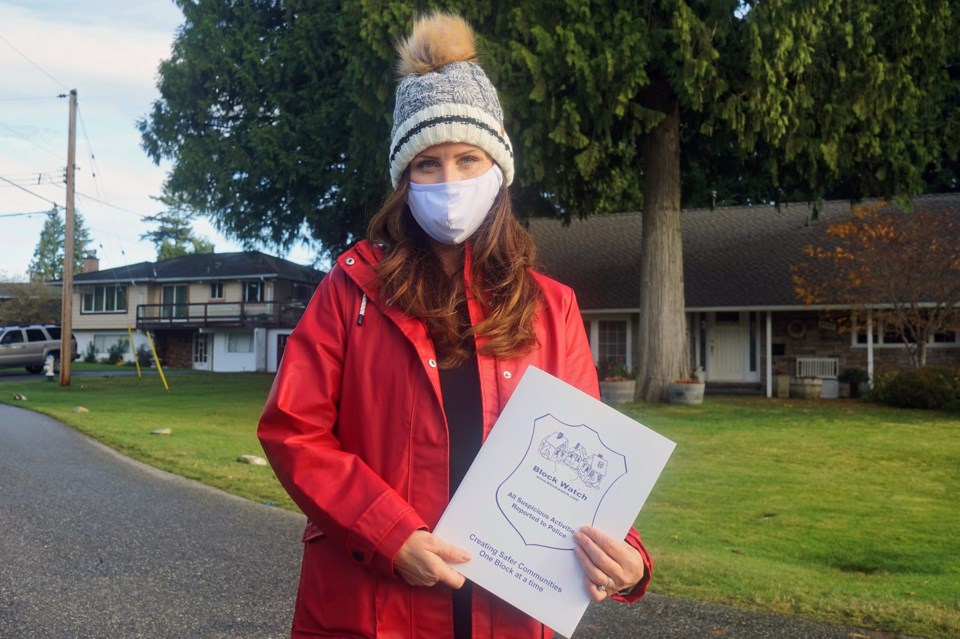 Cindy Andresen is a member of the Tsawwassen Crime Watch.Cameron Thomson

In response to a spike in local crime, a Tsawwassen man has reinvigorated the neighbourhood block watch program which now boasts 140 members.

In September, P.A. Olson answered a knock on his door to find a woman in tears asking him if he knew anything about the backpack that was left in his front yard. The woman explained the bag contained cancer medication for her husband who was undergoing chemotherapy. The bag was kept in her husband’s truck, but the vehicle had been broken into and rifled through before the bag was taken and somehow made its way to Olson’s front lawn.

“That pissed me off to the point where I'm like I have to do something," Olson said recounting the event in an interview with the Optimist.

When thinking of what to do next, Olson remembered his time growing up in Delta in the 1980s and the very active neighbourhood watch. Olson said being a part of the program told kids it was a safe place to go and indicated the home’s occupants were watching out for their neighbours.

After some investigation, Olson found that Delta’s block watch program was not nearly as active as it once was due to lack of interest.

Curious, Olson posted to Facebook asking Delta residents if they would be interested in revamping the program. What ensued was an overwhelming response of support and interest, quickly followed by approximately 100 names of people showing interest in becoming part of the watch.

Out of those 100, about 25 to 30 expressed interest in being a block watch captain or co-captain.

To become a block watch captain or co-captain, one must complete a police information check, canvass their neighbourhood and fill out a participation list according to how many of their neighbours would also like to take part. The completed participant List and a map of the captain’s block must then be emailed back to the DPD.

The captain will then receive an email from the Delta Police with quarterly newsletters and/or any other time there are things to be aware of in their area. The captain then distributes the information to the people on their participant list via email.

In addition to the email chain, Olson has created a WhatsApp group for all members of the block watch program. Anything suspicious will be reported both to the police and the appropriate channel in the WhatsApp group.

So far, Olson says there are 25 captains and/or co-captains who are now in the process of canvassing their neighbourhoods.

Olson mentioned the block watch program he knew as a kid would conduct walks around the neighborhood. However, the DPD has mandated no patrols of any kind will be conducted by members of this new block watch initiative.

A side effect of keeping each neighbourhood a little safer, Olson says the once lost sense of community is being found again.

“We've lost that small town feeling, that small town vibe and we need to get it back and that starts with knowing who your neighbours are,” Olson said. "Anybody can quickly write a Facebook post, unless you're the person it happened to or you know somebody it happened to you kind of skip it over. There's no real accountability as far as that's concerned."

With 25 captains/co-captains canvassing their neighbourhoods Olson is confident the Tsawwassen block watch program is well on its way to getting over 1,000 people involved.

In terms of the communities that have shown the most interest, Olson says Boundary Bay is well covered as is Beach Grove. Where the program needs help though is Pebble Hill, English Bluff and central and eastern Tsawwassen.

If you are interested in joining the Tsawwassen Block Watch program, you can contact P.A. Olson at redmekong@gmail.com.