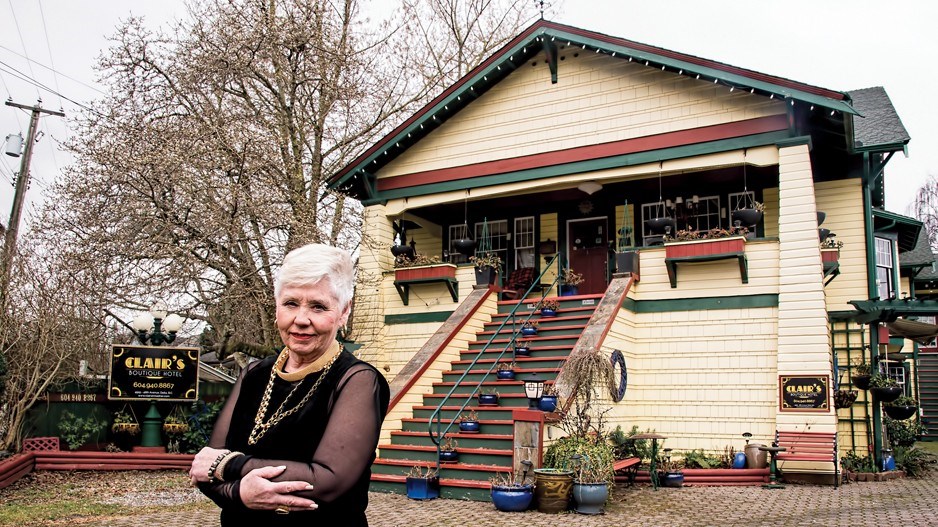 Clair Oates at her Ladner boutique hotel, which hasn’t had a paying customer since September 2020.Chuck Chiang

When Clair Oates received an initial quote to renew her boutique hotel’s commercial insurance policy, she considered shutting down her business.

Oates, who hasn’t had a paying customer at Clair’s Boutique Hotel in Ladner since September, typically paid around $4,000 pre-pandemic for commercial insurance. This year, she was quoted $9,000 and $22,800.

“I don’t have the money,” she told BIV at the time.

At Oates’ renewal deadline, a quoted premium price from Rand & Fowler Insurance Agencies Ltd. was just over $5,000. She also had to change her coverage to lower the quote.

Oates said she has had only one claim in nearly 18 years of business and is unclear why the cost of insurance has risen so dramatically.

“Something has to be done about these gouging insurance companies.”

The industry cites a rising number of claims, payouts over climate-related events and the cost of reinsurance – insurance for insurers – as reasons for insurance rate increases.

Underwriting profits have been narrowing for years, with insurers paying out for more claims than expected relative to the premiums they collect. This dynamic is exacerbated by rising replacement costs and, over the past year, businesses shutting down and cancelling insurance policies.

“Underwriting results were poor. That then forced contraction or withdrawal of support, and then that led to the price increases in an effort to get underwriting profit,” McDonnell said. “Those that were left accepting the risk were able to charge more because they were being overwhelmed with demand.”

Insurance providers continue to try to balance risk while searching for yield, and with global uncertainty, rising costs and more catastrophic events, the result is higher insurance premiums.

More than half of Canadian small and medium-sized business owners reported premium increases between October 2019 and October 2020, according to a Canadian Federation of Independent Business (CFIB) survey. One in six saw an increase of at least 25% over the same period, as did 18% of B.C. businesses.

“When you’re already operating on such thin margins, even a slight increase in your costs can really have a rippling effect in terms of how you absorb that cost. And will your customers be able to take a price increase?” said Muriel Protzer, senior policy analyst with CFIB.

“Back in 2018, insurance costs were identified as a top concern for about 40% of B.C. businesses, and now our most recent data’s showing that that’s risen to about 56% of business owners.”

More than three-quarters of CFIB’s nearly 4,000 survey respondents believe government has a role to play in ensuring businesses have access to reasonably priced commercial insurance.

Yvonne Anderson, CEO of Santevia Water Systems Inc. and chair of the Delta Chamber of Commerce, said a number of local businesses raised the issue of insurance in a pre-budget call with federal Minister of Employment, Workforce Development and Disability Inclusion Carla Qualtrough, member of Parliament for Delta.

Santevia renewed its insurance earlier this year. Anderson’s broker was able to obtain only one quote: it was from the policy provider the company was already using, and the cost was 42% higher than the year before.

“What it means is we have to make choices. So insurance goes up 42% – maybe we don’t have bonuses. Or maybe we don’t get to hire that extra employee,” she said.

“This doesn’t allow us to expand the way we would like to expand, because we’re putting dollars in an area that is a must-have, because we cannot operate with our clients, especially our U.S. clients, without insurance.”

Lawrence Kennedy, president of Rand & Fowler, said he regularly hears from companies desperate to find a quote they can afford. He believes insurance industry consolidation has contributed to the problem.

Intact Financial Corp. is in the process of acquiring RSA Insurance Group PLC for $12.5 billion.

Intact is the top underwriter in Canada, according to Canadian Underwriter’s 2020 Stats Guide, with a 15% share of the Canadian market. RSA Canada claims 10%.

“What it does to the end user is it further shrinks a smaller market. Coming back to Clair [Oates] – believe it or not – right now there is only one single insurer in all of Western Canada that will write their little business insurance,” Kennedy said.

He believes the Competition Bureau should review Intact’s acquisition, which is expected to be completed in 2021’s second quarter, according to the firm’s annual report.

According to the Insurance Bureau of Canada (IBC), there are more than 100 companies in B.C.’s commercial insurance market. The federal Competition Act prohibits those companies from sharing information on pricing, how claims are handled or underwriting guidelines, but they would generally examine and act on the same local and macroeconomic trends and conditions.

“What we are seeing is that the insurance companies have more discipline in commercial underwriting. They’re really taking a close look and reviewing their risks,” said Rob de Pruis, IBC’s Western Canada director of consumer and industry relations.

“There are some very challenging market conditions that are going on right now, but we’re also starting to see some segments that are really starting to stabilize in business insurance, and that’s good news.”

This penthouse is the tallest, highest-priced unit in the history of Okanagan real estate (VIDEO)
Mar 11, 2021 10:28 AM
Comments