Citizens Against Port Expansion keeping up pressure in fight

Advocacy group says it's 'debunking the spin' by Port Metro Vancouver
Apr 9, 2014 12:00 AM By: Sandor Gyarmati 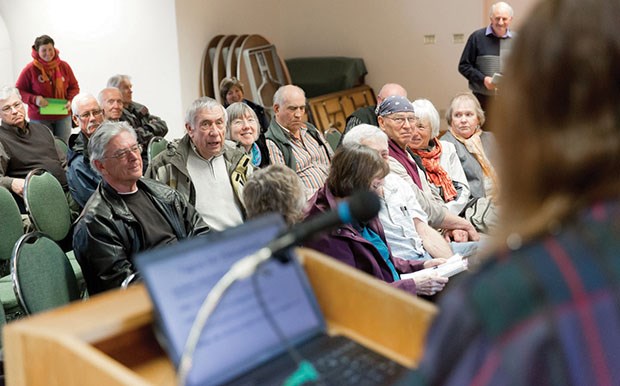 The mood was clearly one of frustration at a public meeting Saturday afternoon organized by opponents of port expansion in South Delta.

Citizens Against Port Expansion (CAPE), which hosted the forum that drew just under 100 people to the Sundance Inn in East Ladner, said it was aimed at "debunking the spin" by Port Metro Vancouver regarding the environmental impacts of the proposed Terminal 2 at Roberts Bank.

It turned into a session where the speakers preached to the converted with audience members wondering what can be done to stop the port authority.

Biologist Marvin Rosenau, who was a member of the now scrapped Fraser River Estuary Management Plan (FREMP), described the significance of the Fraser River estuary and how the Delta region had one of the last important riparian habitats for fish.

He said a significant amount of damage has already occurred over the years with concrete and stone rip-rap structures as well as the current port, noting there's been no inventory assessment, no mitigation or compensation for ongoing habitat destruction.

Critical of the port authority's "habitant banking" program, he said T2 would only exacerbate an already bad situation.

Rosenau said possible solutions include land acquisition and securement or court action, adding the way Americans go about protecting their river estuaries puts Canada to shame. He said it's important for people to get involved by lobbying as well as supporting stewardship groups. "Speak out, rattle a few chains of the politicians. Maybe you'll get some resonance there... I think lobbying Port Metro Vancouver is a really important thing, and lobbying DFO (Department of Fisheries and Oceans) to try to find out who's in charge of all this."

Noting Roberts Bank was mysteriously left out of the RAMSAR designation for the region a couple of years ago, Taitt said a number of issues have already been raised, but the port's consultants have been misinterpreting data provided by scientists.

A longtime member of the Boundary Bay Conservation Committee, Taitt also noted an independent panel in 1979 recommended against further port expansion at Roberts Bank, however, the port authority has gone about doing piecemeal developments. "The idea that the port can do anything to compensate for habitat lost in the active front is just biological rubbish," she said PMV will likely submit an environmental impact statement at the end of the year, which would kick off a lengthy environmental review.