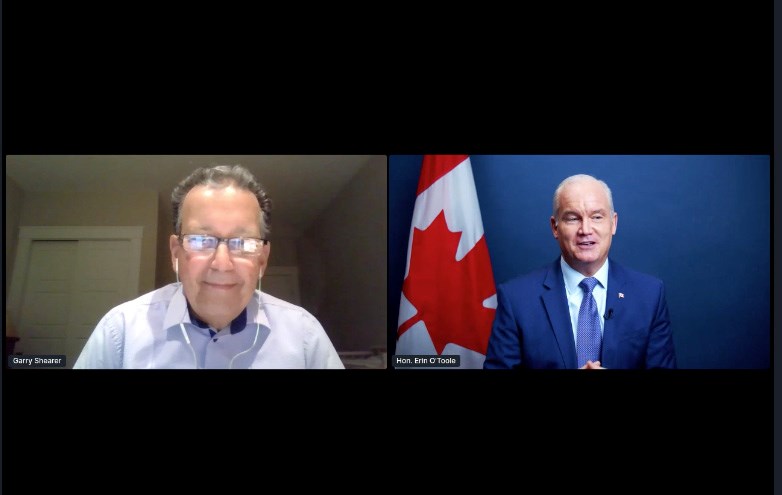 The Delta Chamber of Commerce had a virtual town hall with Conservative leader Erin O’Toole on Friday afternoon. The session was hosted by Chamber executive director Garry Shearer.Screenshot

Conservative leader Erin O’Toole paid a virtual visit to the Delta Chamber of Commerce on Friday afternoon in advance of the release of today’s (April 19) Federal Budget.

O’Toole has been Leader of the Official Opposition of Canada and the leader of the Conservative Party of Canada since Aug. 24, 2020.

On the Massey Tunnel replacement, O’Toole said this project is a great example of a need for partnerships.

“Any of these key infrastructure projects will have a municipal lead, but will require provincial and federal participation if you are talking about a bridge or a long-term major regional piece of transportation infrastructure,” he said. “Mr. Trudeau is behind in two respects. One, he always has an Ottawa knows best approach. I doubt they have called Delta and asked Delta council what they think, because Ottawa knows best with Mr. Trudeau. The other area they have been lagging on is they have only announced half of what their infrastructure spending is. In our case, when we were in government, we had partnerships for shovel ready projects and that will be our approach. What is the top priority in this region to make sure there are solutions and make sure the federal government is a partner and not a top down preacher.”

On port expansion in Delta, O’Toole said the port of Delta is an important part of our Asia-Pacific strategy.

“We need to grow more markets in the Pacific and diversify our Pacific gateway strategy and Delta Port is an important part of that,” he said. “This is another area of federal partnerships. Ports have that federal component and have the multiplier effect for the entire national economy, so there are jobs for families in Delta, but also reaching export markets far from Delta. There is national interest that is there for a critical piece of trade infrastructure. I believe the federal government has a meaningful role to be a partner in having the most world-class, environmental and wildlife mitigation strategies as possible.

“I think we can, whenever possible, mitigate concerns with respect to environmental and ecological impacts of an expansion, but we cannot be satisfied with what was done in the past. We have to strive to have the best policies in the world, but we also have to say these pieces of economic infrastructure are critical to our countries’ prosperity.”