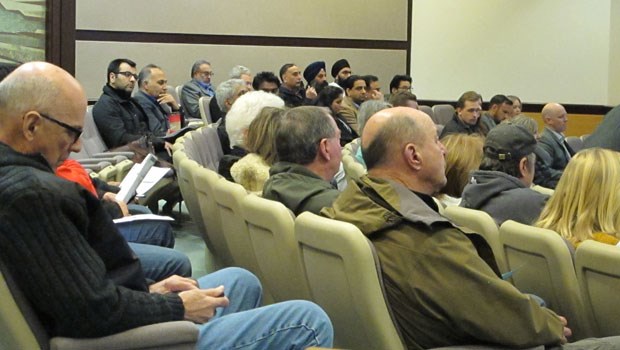 City hall was packed with residents Tuesday night at a public hearing for a 40-unit townhouse proposal on Ladner’s 57th Street.Ian Jacques/Delta Optimist

The public hearing heard from 23 speakers, the vast majority of which spoke in favour of the development

Those in support said the project would provide a more affordable option for young families either already living locally or those wishing to move back to their childhood home.

Several speakers from the real estate community echoed those comments, saying there’s a demand for this type of housing and that the project would sell out quickly.

Those opposed cited drainage issues, the increase in traffic and safety concerns around crosswalks.

“This is not affordable,” said Kanakos as council members discussed the proposal following the hearing. “I want to support affordable housing in Ladner. Show me how we can do that. It is a site for townhouses and will be developed as townhouses eventually, it just needs to be tweaked. That’s why I moved to deny it with the aim to come back to council with a smaller footprint, more greenspace and less projections into the public realm.”

Jackson took issue with the number of speakers who lived far from the proposed project.

“I’m always interested in hearing from people about development from other areas and welcome you all from North Delta, however I must say that I have to listen to the people who live in the neighbourhood whose property is affected by this proposal,” she said. “I’m concerned about the character, it’s massive and does not seem to fit. There is no reason that this can’t be built within the property line.

“What we create here at this table… what we approve at this table is important for the next 40 years. We should look at the form and character and create places where people want to live and stay.”

Guichon and Copeland both said there were many likeable things about the proposal, but both took issues with the density.

“I’m failing to see the broader benefits to the existing community,” said Guichon. “I know we would be able to fill those 40 units no problem, but what I struggle with is at what cost to our existing neighbourhood and the uncertainty of what we would create on the 57th corridor without adequate public consultation and adequate OCP review.”

McDonald and Kruger both said they liked the development, how attractive it was and its proximity to transit, which Kruger stated is an important goal of council. Harvie said the application offers housing options for families.