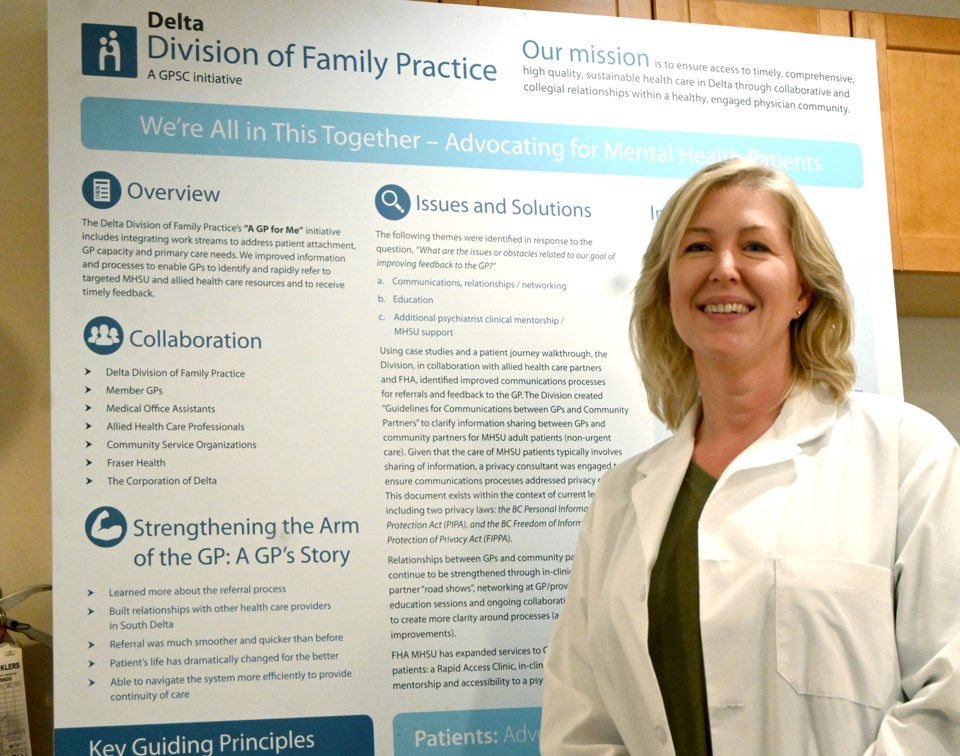 They’ve done a lot of work behind the scenes trying to improve South Delta residents’ access to local primary care, increase local physicians' influence on health care delivery and policy as well as provide professional support for physicians, especially now during a pandemic.

Formed about seven years ago by physicians in South Delta and Doctors of B.C, formerly called the B.C. Medical Association, the Delta Division of Family Practice is a membership organization supporting local physicians.

It gives them an opportunity to work collaboratively with Fraser Health, the General Practice Services Committee and the Ministry of Health to identify health care needs in the community and develop solutions.

“Especially now, the face of health care has changed with the clinical delivery of care that doctors provide due to COVID-19,” said executive director Geri McGrath. “Some of their practices have moved to virtual care, which for a lot of doctors is a first and it’s a first for patients as well. There has been a shift in the way health care is being delivered in this country because of the pandemic and we’re looking for ways to support our physicians and help support the community.”

The shortage of family doctors has been an ongoing concern for South Deltans as well as every other community in the province.

Delta Division of Family Practice has been busy recruiting in recent years trying to fill the growing shortage in South Delta, but it has been a challenge finding enough doctors who can accept new patients.

“It’s a long process, especially if there’s a doctor coming from overseas,” said McGrath. “The problem with recruitment at this point is that when we recruit a new doctor, often that physicians will move into a practice and take over a patient panel, rather than attaching new patients. Where we find ourselves at this point in the province is that there’s a mass amount of doctors that are on the cusp of retiring and there’s not enough new doctors to replace them and to attach new people who need doctors in the province.

“We’re trying to think outside of the box and we’re having a lot of conversations on how can we look at doing attachments differently.”

“It’s not that there’s a shortage of doctors, but as the rate of doctors are retiring exponentially, the new doctors are coming in and managing their practices, but we’re not getting a net number of new doctors,” she said.

The doctor’s group has a website called FETCH (For Everything That’s Community Health) that not only helps the public and health care providers access information about community health services in South Delta, it also links patients looking for a doctor with available family physicians.

Patients can sign up to be on a waiting list and are contacted directly by the physicians, however, the doctors’ group has stressed it doesn’t want to raise expectations because it could take months to get a response. There’s thousands of names on the waiting list.

The Delta Division of Family Practice is also working towards helping connect those who do not have a family doctor with team-based primary care, while also supporting various other initiatives including for residential care and assisted living.

McGrath noted much of that work had to be halted for the time being due to COVID-19 while Delta Division of Family Practice tries to support its doctors and keep them safe.

In addition, Delta Division of Family Practice also developed several other resources to assist the community, including a new resource website (mentalhealthdeltadivision.com) to support adult, child and youth mental health.

The Delta Division has also been assisting on the frontlines of the COVID-19 outbreak including partnering with Fraser Health and the City of Delta this spring to set up South Delta’s COVID-19 screening site, located at the former Fraser Health community health office next to city hall.

The site has seen much longer lineups in recent weeks due to the increasing number of cases in the province, prompting Delta Division of Family Practice to explore potential solutions to fulfill the demand.

Jetzer, the physician lead for the Delta testing centre, said the number of people getting tested started seeing a decrease until about August, but then COVID-19 cases began to rise, prompting the facility to add an extra shift and physician as well as having nurses taking on even more of a testing role.

“Now there’s another cohort with kids coming in from school or daycares because as we head into the fall, we head into the cold and flu season, kids get typically a runny nose or sore throat, so now we’re seeing a lot of kids coming in. So they can get tested, conceivably get a negative swab result and then they go back to school. That’s a huge component of patients that’s really increased the volume as well,” added Jetzer.

For more information about the Delta Division of Family Practice and its resources, check divisionsbc.ca/delta.

Editor's note: Pick up your copy of the People to Know magazine in the Oct. 29th print edition of the Optimist.