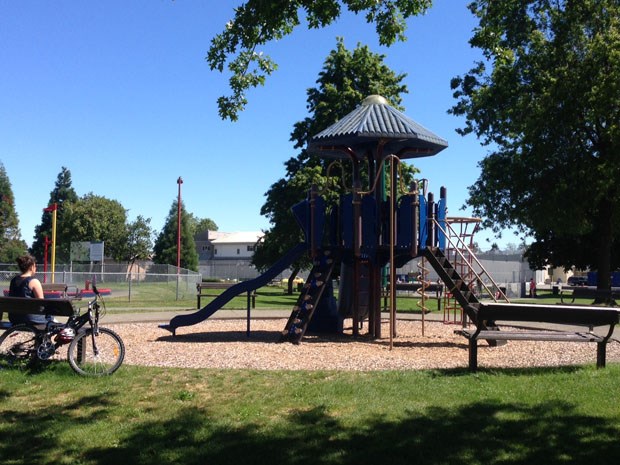 Delta is facing a major bill as aging playground equipment will have to be replaced.

Delta is facing a major bill as aging playground equipment will have to be replaced, says Coun. Robert Campbell.

The chair of the parks, recreation and culture commission is pointing out Delta's last major playground replacement program, which took several years and around $2 million to complete for dozens of sites, ended in 2005. Now it's time again to start talking replacement, something that could have a substantially higher price tag this time around.

"They were all replaced in about a three-or fouryear period, virtually every playground on municipal land was replaced at that time. So they're all about the same age. The cost now could be double that," said Campbell.

The replacement program was launched after a young girl broke her arm at Ladner's Cromie Park after a swing set collapsed. A consultant's report stated playground equipment in many local parks was unsafe.

Campbell noted enough time has gone by where a plan now needs to be formulated involving a report for his commission as well as discussions at Delta council's business plan workshops where the financing can be devised.

"At the same time the commission is discussing, 'OK, how do we want to go about this? What's the best way to recommend to council to deal with this? Is it a three-year or five-year project? Then it's got to get into the priority of things. We want to have a good plan in place for it," he said.

Campbell added the replacement program is also a good opportunity to introduce some innovative playgrounds such as the adventure playground that's going to have a grand opening this Saturday at Annieville Lions Park in North Delta.

The playground was co-funded by Delta, a Co-op Community Spaces grant and the North Delta Lions Club.

A policy approved last year encourages more natural play features in playgrounds as part of those cost-sharing agreements. Delta's policy remains unchanged for a standard playground as those projects will continue to see the municipality contribute 50 per cent to a maximum of $35,000. However, for a playground using more natural play elements, Delta would provide up to $45,000 as well as up to $5,000 for a professional landscape architecture service to come up with the design.

Research from UBC and the Child Family Research Institute at B.C. Children's Hospital concludes that risk in outdoor play is beneficial for children's health as well as encourages creativity, social skills and resilience.

A Delta report notes experts say too much order to playgrounds makes them unappealing to kids.