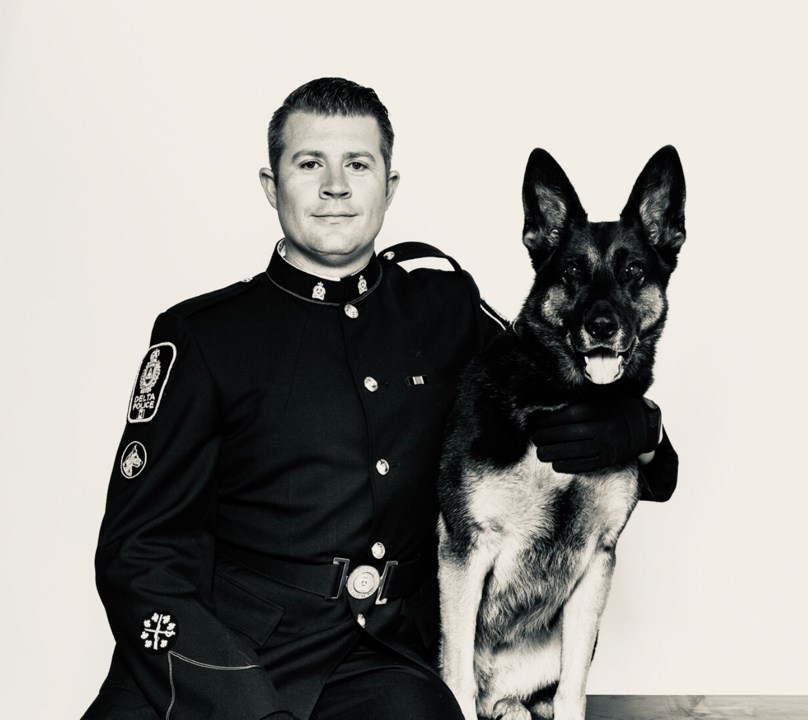 Const. Jason Martens and his police dog Dezi have ended their 10-year professional relationship as Dezi is now retired. Martens is returning to front line work within the department.Delta Police Department

On her last night shift, Dec. 28, 2020, police dog Dezi nabbed a suspect in North Delta wanted on three warrants. She and her handler, Const. Jason Martens, chased him through back yards, over fences and finally nabbed him in a cul-de-sac.

“She’s amazingly fast, but it’s time for her to retire while she’s still healthy,” said Martens.

He’s also taking the opportunity to move on after 10 years with the RCMP-led Lower Mainland District Integrated Police Dog Service, and has gone back to front line patrol work with the DPD.

“When I leave the house in the morning, she’s still looking up at me eagerly, saying - are we going,” added Martens.

But his knees are a bit sore after 10 years of hoisting 75 pound dogs over fences, as they chased bad guys, found missing persons and helped investigate break and enters and other offences. It’s physically demanding work, but you can’t let your dog down, he explains.

“It’s one of the best jobs in policing,” he said. “When you know your dog is on that track – there’s not many feelings like that.”

The duo have had many success stories.

“Officers tried to apprehend him so they could safely bring him to hospital, but he took off down the tracks,” added Martens. “It was dark, and they couldn’t find him, so Dezi and I came to help. We were following the scent down the tracks and suddenly Dezi jutted into the bramble bushes, and gave me happy feet.”

A train was coming, so Martens thinks they found the man just in time.

In another success story, the pair were called to help locate a stolen truck and trailer. Dezi and Martins found the truck – and the suspect unloading the tools.

“We were able to sneak in on our bellies in the field – I coordinated containment, but the suspect was just getting into the truck and about to drive away before other officers could get in place,” said Martens. “I put Dezi over the barbed wire fence and she took off down the driveway – launched herself at the suspect before he even got the door shut.”

Police were able to recover thousands in stolen goods in that instance.

Even after all this time, Martins remains impressed by how accurate police dog noses are. “Once we were called out to file involving a knife near a skytrain station,” he says. “We needed to find the knife, but there was so much garbage and foot traffic. I gave her the search command and within 10 minutes she was indicating into a concrete flower pot. I don’t know if we could have found that knife without her.”

Although Martens is no longer with the dog unit, he now volunteers in his own time for charities for retired Canadian police dogs – Ned’s Wish and Support Retired Legends. Unlike their handlers, police dogs don’t have pensions, and often have significant medical needs later in life due to the physical stresses of their former jobs.

Martens’ older retired dog – Tyson – benefitted from Ned’s Wish when he required expensive surgery due to a work-related injury. Now Martens is giving back to help other retired dogs.