Delta wants to see more policing resources at Deltaport and is turning to its fellow municipalities for support.
Sep 17, 2019 10:35 AM By: Ian Jacques 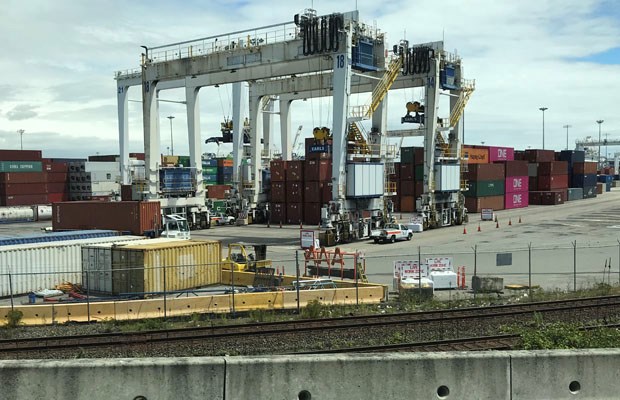 The city has put forward a motion asking that the provincial and federal governments work together to re-establish a port policing or equivalent agency at the Roberts Bank container terminal and at all ports in B.C.Delta Optimist file

Delta wants to see more policing resources at Deltaport and is turning to its fellow municipalities for support.

The city has put forward a motion at next week’s annual Union of British Columbia Municipalities (UBCM) convention in Vancouver asking that the provincial and federal governments work together to re-establish a port policing or equivalent agency at the Roberts Bank container terminal and at all ports in B.C.

The Ports Canada Police was disbanded in 1997, leaving municipal police to patrol docks and ports, provincial government money laundering investigator Peter German noted in his recent report. German warned the lack of a dedicated port police could be allowing large numbers of stolen vehicles to slip out of Canada.

A 2011 Public Safety Canada report concluded that Canada’s three largest ports – Vancouver, Montreal and Halifax – are the most vulnerable to inbound and outbound smuggling, citing container traffic volume as a key reason for the ports’ appeal to smugglers.

“We have 250-plus port police in Seattle port. They are not there because there is not a problem – there is a problem,” Mayor George Harvie told the Optimist. “We have no port police. We have the CBSA (Canadian Border Services Agency), but they are very understaffed and only can do .5 per cent of the thousands of containers that go through, so if you are in organized crime that’s pretty good odds. Stuff a container and you only have .5 per cent of a chance of it being inspected.”

Harvie said he will be speaking to the motion at UBCM and expects it to get wide-scoping support.

“I’m confident we will get support. I’m also taking this opportunity now that we are in a federal election to put it on the table. We need to have support for this,” said Harvie. “I see this as a serious public safety issue.”

“For many years, we were the only port in Canada to fund a federal policing agency. However, since policing is not core to our mandate, we decided it was more prudent to fund security measures that do fall within our mandate, and focus on complementing the activities of the police agencies,” the port authority explains.

In terms of policing, the Delta Police Department has jurisdiction up to the municipal water boundary. Between 2009 and 2018, police responded to more than 750 calls for service at the port.

“We need to continue to raise the conversation about port security and ensure that we have the amount of dedicated resources to the organized crime element to make sure the port is well looked after and well maintained,” said Dubord. “CBSA are the law enforcement agency so they don’t have the same powers as a police agency. They don’t have access to the databases and intelligence that police do, so it makes it difficult for us to integrate at a real high level.

“We have an RCMP area called F-Sock force that deals with major crime, but they also deal with airports and borders, so we believe there needs to be an integrated unit – whether that is a separate unit or a port policing unit – that is just focused on port policing. Delta police would continue to respond to the day-to-day calls.”

1305
Letters: People of Delta should not pay this bill
438
Dolphins Swim Club getting national and provincial attention
432
City of Delta cruise ship terminal could depend on Massey Tunnel replacement
345
Letters: Why is the word “God” still part of our national anthem?
335
Letters: How does the Premier feel about travelling to get his vaccine?