Delta stocked with enough salt to handle an extreme winter 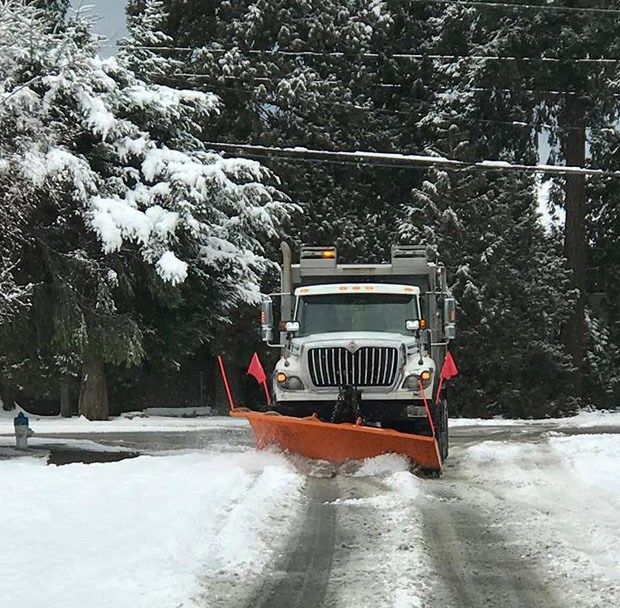 When Old Man Winter raises his ugly head, the City of Delta is prepared.

Delta has also secured a contract with Mainland Contracting to guarantee up to an additional 3,000 metric tonnes of road salt for the season, which in conjunction with what Delta already has on hand, provides up to 5,500 metric tonnes.

Reid said that should be sufficient as historically Delta has used up to 4,500 metric tonnes of road salt during extreme winters, but uses between 2,500 and 3,000 in an average winter.

The engineering department also has the ability to make its own salt brine, which is used to pre-wet priority routes.

The city has activated its emergency response protocol line which is a direct line for police, fire and ambulance to request site-specific snow clearing to provide access during emergency situations.

Delta’s winter road conditions phone line at 604-952-3820 is available to the public and will provide updates every four hours during a snow storm.

Once again, Delta has its Snow Angels program up and running. The program assists seniors and those with physical disabilities who need help with driveway and sidewalk snow clearing. Seniors’ centres are helping coordinate the initiative.

There is now a stiffer fine in place for commercial property owners who don’t remove snow and ice from their properties within 24 hours.

Council voted in favour of increasing the penalty amount to $150, discounted penalty to $125 and late payment to $175.

“This would further incentivize commercial property owners or occupiers to remove all snow and ice and rubbish from sidewalks abutting their property,” stated a Delta staff report.