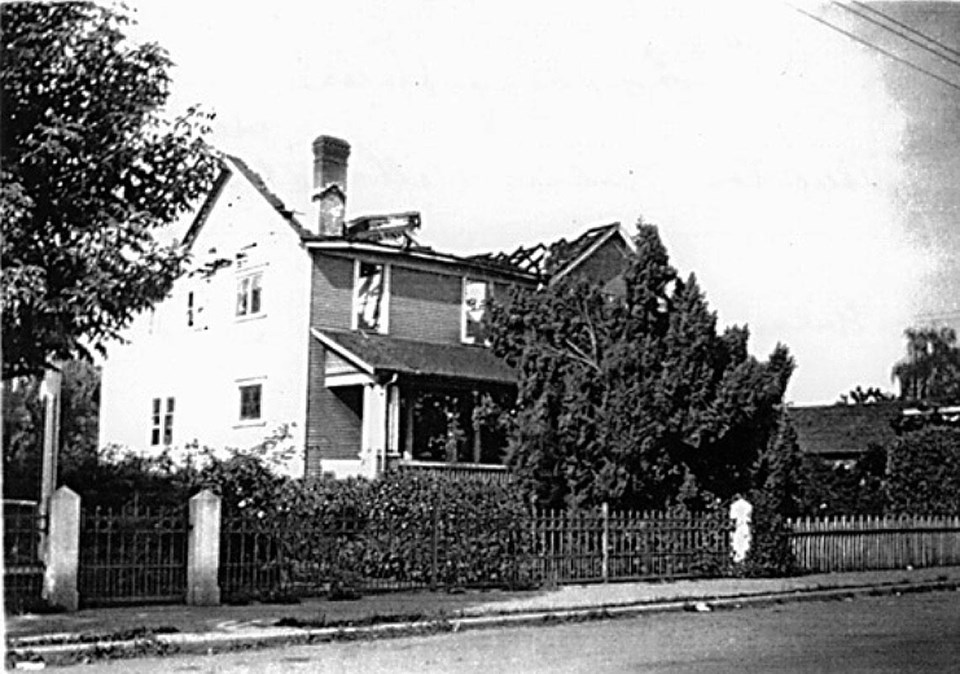 The Denecroft boarding house on Delta Street was heavily damaged by fire in 1940 but, fortunately, nobody was hurt.Delta Archives

Fast work by volunteer firefighters saved a piece of history in Ladner in 1940.

On Jan. 31st that year, the Denecroft boarding house on Delta Street was partially destroyed by a fire.

The house for a time was owned by the Lanning family who later rented it to Mr. and Mrs. Walter Dean, who used the home as a boarding house.

Mr. and Mrs. G.F. Rollins had just purchased the home.

“Greater loss from the flames would have been suffered by Mr. and Mrs. Rollins, and the occupants of the boarding house, had not prompt action by a hastily organized volunteer fire brigade saved practically all the furniture and most of the personal effects. Greater loss was sustained after articles had been placed outside the building, and before these could be moved to other buildings,” a front page story in The Optimist reported.

The blaze started in the chimney from a fireplace in the kitchen and it was believed that sparks fell on the wooden shingles near the chimney. A breeze at the time also contributed to the fire starting.

The article also noted all the losses were covered by insurance which would be used to rebuild the home.

The building was comprised of two homes at the time, the original having been built in 1898 by Suther Chapman, while an addition was built in 1915 by G.M. Lanning, one of the proprietors of the

When they purchased the home, Rollins retained the name Denecroft given to it by the Deans.

By strange coincidence, Chapman, who moved away several years earlier, on the afternoon of the fire had just arrived by bus to Ladner for a visit and passed his old home as flames were coming out of the structure.

The building would be demolished in the 1950s to make way for new retail buildings including Village Hardware.

The former Village Hardware building more recently has been remodeled and will be home to a brewing company.