It’s $40 million well spent, according to the province, even though it’s an expenditure on an aging crossing that’s to be decommissioned.
Sandor Gyarmati May 15, 2020 6:00 PM

It’s $40 million well spent, according to the province, even though it’s an expenditure on an aging crossing that’s to be decommissioned.

The transportation ministry yesterday said work is underway to improve brightness and visibility in the George Massey Tunnel, part of a package of highway and tunnel safety upgrades for the 61-year-old crossing announced over a year ago.

"We continue to move ahead with our work to replace the George Massey Tunnel, but in the meantime, we are making immediate safety improvements inside the tunnel for drivers who use this route every day," said Claire Trevena, Minister of Transportation and Infrastructure, in a news release.

"Plans for the new, future crossing are underway with a business case expected to be ready for the fall."

It was a new 10-lane bridge project with associated highway works which had got underway just prior to the last provincial election and was scheduled for completion in 2022. It was put on hold not long after the NDP assumed power and eventually cancelled following a review.

When it was cancelled, the minister noted the review confirmed the controversial bridge project “was the wrong project for the region and flawed from the start.”

Consultations eventually began on alternatives with Delta Mayor George Harvie, concerned about the timeline of a new project, forming a group comprised of other mayors to help come up with a consensus and speed things along.

Last year Metro Vancouver mayors voted in favour of an eight-lane immersed tunnel, but the provincial government still had the final say.

Earlier this year at an open house in Tsawwassen, the new eight-lane tunnel option was on display as well as a second option put forward, that one being a long-span bridge with the same number of lanes.

Both options include the closure of the existing tunnel.

The province is working toward developing a business case on a preferred option that will be completed later this year. 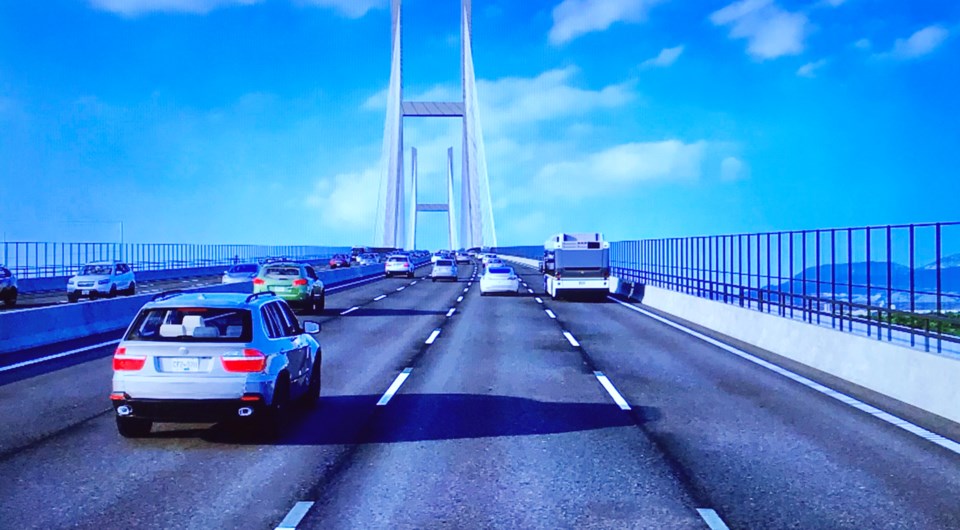 The ministry notes the eight-lane immersed tube option would have a similar grade as bridge, while having low property impacts. It would also be taller inside than the current tunnel, requiring a deeper trench in the river.

The ministry notes that while there would be in-river impacts during construction, there’s also potential for in-river habitat enhancement.

The option would also be a shorter crossing, compared to a bridge, while having a comparable cost.

Also having dedicated transit lanes, a long-span bridge would have no piers in the Fraser River. However, they would be required in Deas Slough.

Asked by some attending the information session why there would even be a need for an environmental assessment for a bridge, since that work had already been done with the previous bridge plan, ministry representatives said the two bridge projects are different, requiring a complex amendment to the previous completed assessment.

The environmental assessment office noted it would be up to two years for an assessment but it might also be completed in less time, they said.

They also stressed the long-span bridge option now presented isn’t as big a project as the previous bridge plan.

The go-ahead to initiate the environmental review for either option would happen in 2021.

Delta South Liberal MLA has been critical of the plan, saying a new crossing could now be up to a decade away while the cost is still unknown.

“Commuters needed relief years ago, but instead of action, the NDP continues to employ more sham consultations and stall tactics in what looks to be a determined attempt to delay this project for another 10 years,” he said earlier this year.

As far as the upgrades underway for the current tunnel, the province notes other work includes improving drainage to prevent ice build-up and water from pooling at tunnel entrances. The ventilation and electrical systems will also be upgraded.

The improvements, which will require nighttime lane closures, are scheduled to be completed by spring 2021

Community Comment: Change is the only constant in our growing community
Feb 3, 2023 9:00 AM