The City of Delta is telling the owner of the vacant North Delta Inn site that a development concept must be submitted for the property, or else the temporary liquor store fronting the site will be shut down.
Jun 16, 2019 8:05 AM By: Sandor Gyarmati 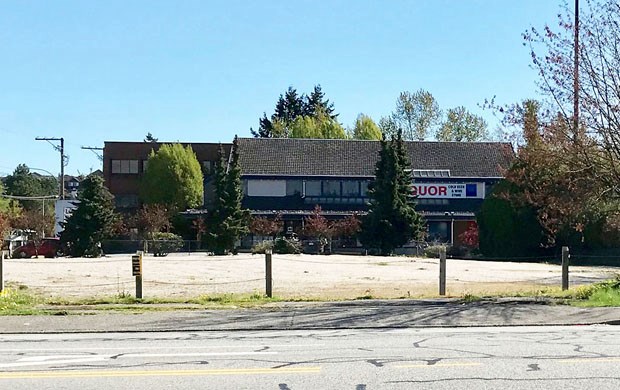 The owner of the vacant North Delta Inn site faces losing the liquor store unless a development plan is submitted.Sandor Gyarmati

The City of Delta is telling the owner of the vacant North Delta Inn site that a development concept must be submitted for the property, or else the temporary liquor store fronting the site will be shut down.

Delta council this week unanimously agreed with a staff recommendation to deny granting a three-year extension for the temporary liquor store near Scottsdale Mall, and instead only extended the temporary use permit for one year with conditions.

Those conditions include a detailed development concept submitted to the city by Aug. 30, 2019. The concept must include details on proposed uses, density, form and character, vehicular and pedestrian circulation, parking, preliminary traffic analysis and details regarding the relationship between the North Delta Inn site and adjacent properties.

The owner must also host a public information meeting by the end of October and a complete development application by the end of December of this year. Failure to meet the conditions could result in two weeks’ notice given to cease operations of the liquor store.

“The owner would be encouraged to expedite these timelines,” a staff report notes.

The hotel at the corner of 70th Avenue and Scott Road was torn down three years ago after the city moved to close it. The former hotel at the time had been used as an unauthorized low-income housing complex and it was riddled with code violations. The site had previously been the subject of a controversial high-rise proposal that never made it to the council table

The city allowed a liquor store that was still operating on the site to relocate for three years to another building fronting the property. That temporary use permit expires June 28, and the owner asked for a three-year extension.

The staff report notes the original temporary use permit was granted so the owner could move forward with plans to demolish the hotel and submit a development application that would likely include a request to move the liquor store back to the North Delta Inn site.

“The owner has recently engaged an architect to prepare development plans for the North Delta Inn site. However, there has been very little progress made since the temporary use permit was issued in 2016,” the report states.

The property is also bounded by a vacant gas station property fronting Scott Road that has been put up for sale and an old strip mall on one side that was just approved for redevelopment into a condo complex. Nicholson Road is at the back.

The staff report adds that giving a three-year extension would have been “too onerous given the desirability of redevelopment on this site.”

The site is owned by a numbered company which retained the services of former city councillor Scott Hamilton of Quadrant Management to make the application for a three-year extension for the liquor store.