Sam Stringer is a graduate of the Wilson School of Design at Kwantlen Polytechnic University. She was also a staff member at the school. But her longstanding relationship with KPU doesn’t end there.
Oct 17, 2020 10:00 AM By: Delta Optimist 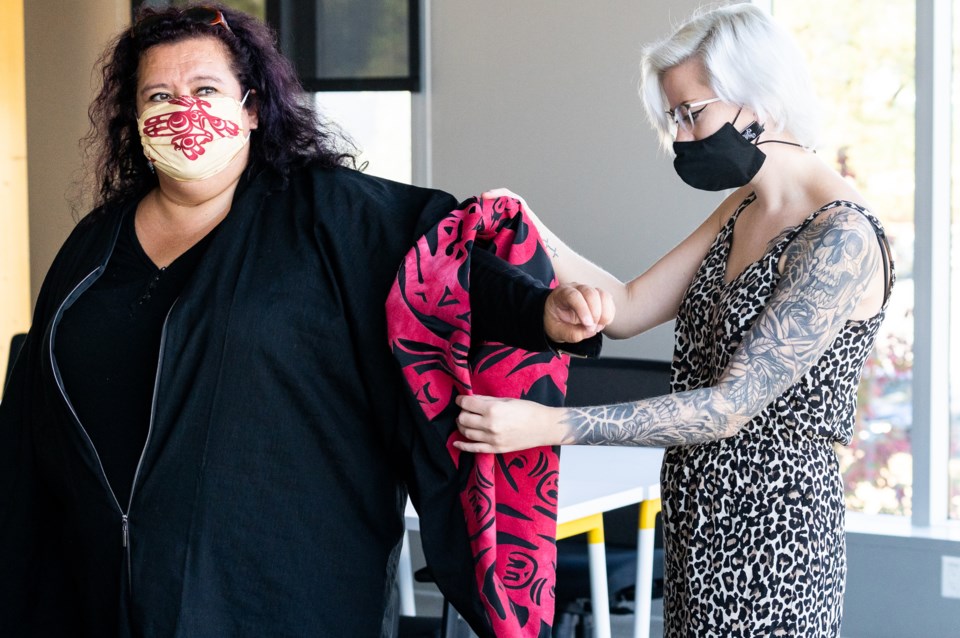 Sam Stringer, right, a graduate of the Wilson School of Design at Kwantlen Polytechnic University, is the designer of the new regalia for KPU’s president and incoming chancellor Kim Baird, former chief of the TFN.KPU

Sam Stringer is a graduate of the Wilson School of Design at Kwantlen Polytechnic University. She was also a staff member at the school. But her longstanding relationship with KPU doesn’t end there. Stringer is now the designer of the new regalia for KPU’s president and incoming chancellor.

“I feel so honoured that they thought of me for this project. I get to do something for my family and I love getting to work with Kwantlen again,” said Stringer.

Stringer quickly embraced the opportunity to create new regalia for Chancellor Kim Baird, who will be installed as KPU’s third chancellor on Monday.

The president’s regalia was also re-designed and complements that of the chancellor.

“We wanted to make the regalia look a bit more modern. We have a new chancellor so the new regalia has a bit of Kim’s heritage, a little bit of the Tsawwassen First Nation, Coast Salish design aspect. That was the inspiration behind everything,” says Stringer.

She did a lot of research into the design elements. She was also introduced to a cedar weaver at the Tsawwassen First Nation who added traditional cedar weaving to the sleeves of the new robes.

“The creation of this regalia is an important recognition of the traditional territory KPU campuses rest on. Sam Stringer has been very thoughtful in ensuring her design upholds important values to KPU but also respects my heritage as a Tsawwassen and Coast Salish woman,” added Baird.

“I couldn't be more thrilled about how she has integrated these values and worked with Tsawwassen artists and incorporated these important details into the design of the robes. I will wear this new regalia with pride.”

Stringer says from a functionality side of things, she wanted to make the robes comfortable. She went with a lighter fabric, did away with the giant bell-shaped sleeves and lapels and shortened it.

She used a hand-dying technique to dye the hoods in KPU colours. She then used a laser cutter to get the unique angles on the robes. Stringer says Coast Salish design works with a lot more negative than positive space, as their art is related to sculpting and carving, she incorporated a lot of negative space on the regalia.

“Every shape in there is quite intentional. Even all the angles on the gown are done at a 53-degree angle which is KPU branding. It was pretty specific,” said Stringer.

To top it all off, internationally renowned designer and traditional Haida artist Dorothy Grant has created a hat to complement the regalia.

The new regalia will be unveiled at the virtual convocation ceremony on Tuesday. Learn more about the upcoming convocation here.

The Installation Ceremony of KPU's third Chancellor, Kim Baird, will be live here on Monday at 11 a.m.