A new section on the DPD website enables witnesses to upload videos directly
May 4, 2021 1:51 PM By: Sandor Gyarmati 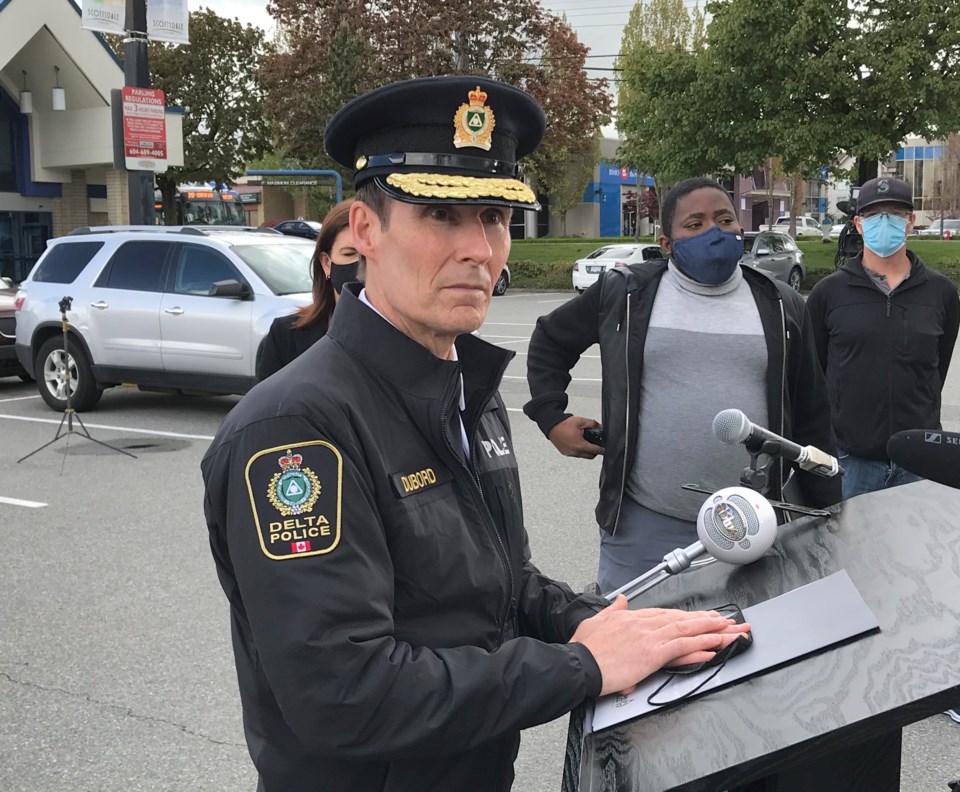 That’s what Delta Police Chief Neil Dubord and Mayor George Harvie told the Optimist Tuesday following a press conference outside the DPD’s mobile command unit at the Walmart parking lot, where Dubord provided an update on the investigation into the murder of Bikramdeep Randhawa, 29, of Surrey.

Among a spree of recent brazen daylight shootings in busy Metro Vancouver public places, the B.C. Corrections Officer was shot outside the mall just before 5 p.m. Saturday with many people around.

One witness even managed to take video of a suspect, appearing to carry a gun, who jumped into a waiting vehicle, footage that was immediately posted onto social media.

“Delta is still a very safe community,” said Dubord. “I think we’re certainly not immune to what happens in the Lower Mainland and we’re not immune to any of the gangs involved. I think we need to be very pro-active as a police department and I know that our teams are already out there, checking cars and making sure they’re addressing any issues that they’re seeing in the community, so, I’m hopeful that the gangsters that are out there shooting will want to avoid Delta because of the high level of visibility that our police department has.”

Harvie agreed, saying, “We have a very well-resourced police department and we have additional resources should Chief Dubord need them to solve this case.”

Saying the public is justifiably shocked at what happened, Dubord, at the briefing, noted that while his department is not a member of the Integrated Homicide Investigation Team (IHIT), the DPD has its own team that is working closely with IHIT and other police agencies.

Harvie reiterated how the DPD has the resources and financial reserves available in certain situations.

Noting they are going through many tips and also asking for more witnesses, Dubord said police have set up a new portal section on the DPD website (deltapolice.ca) where the public can directly upload any video footage onto the page.

He also explained some of the other advanced technology being used by investigators.

Dubord, noting there were about 200 people in the vicinity when the shooting occurred, was asked what he has to say to those who were in the mall parking lot during the shooting.

“We know that there is that anxiety with people that they should be able to go shopping, get their groceries, do their chores, do whatever they need to and feel safe without the risk of there being a shooting nearby,” he said. “That seems ridiculous in the world…the risk to public safety for bystanders and people who are in and around the community when these shootings are happening, it’s quite shocking to think about that.”

Randhawa’s bullet-riddled car came to rest on the sidewalk on 72nd Avenue by the Shell gas station on the corner of Scott Road.

Police confirmed that the suspect vehicle involved was discovered on fire in the 3700 block of Portland Street, just east of Boundary Road in Burnaby about an hour following the shooting.

Asking the public for any dash cam or other video footage, Dubord said the suspect vehicle drove southbound on Scott Road, turning west onto Highway 10 and then northbound on Highway 91.

Police said the murder victim wasn’t known to them and that investigators are looking at whether the shooting may have been linked to his job, or whether it may have been mistaken identity.

Dubord said all angles are being investigated, but further details of the investigation can’t be released at this time.

Randhawa had worked at the Fraser Regional Correctional Centre since 2016.

B.C. Corrections and the B.C. Government and Service Employees Union issued statements this week expressing condolences to Randhawa’s family and support for his colleagues.

Family and friends are holding a candle light vigil at the Walmart parking lot this Friday evening between 6 and 8 p.m. Organizers ask that is anyone wishes to attend, that they wear masks and social distance in compliance of the current COVID-19 public health orders.