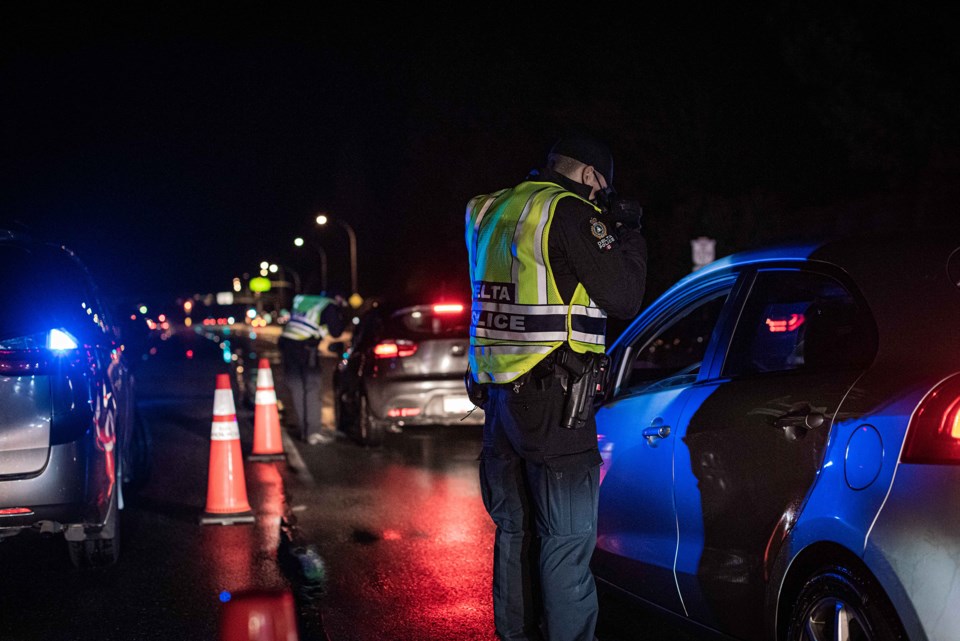 According to DPD spokesperson Cris Leykauf, during the Christmas period from Friday Dec. 11 through Jan. 1, officers took 31 drivers off Delta roads who were believed to be impaired by drugs and/or alcohol.Delta police

Delta saw fewer impaired drivers – down about 16 per cent from last year.

That’s according to Counterattack road check statistics released to the Optimist this week by Delta police.

According to DPD spokesperson Cris Leykauf, during the Christmas period from Friday Dec. 11 through Jan. 1, officers took 31 drivers off Delta roads who were believed to be impaired by drugs and/or alcohol. This includes drivers who refused to blow into the Approved Screening Device. (Refusal has the same penalty as fail.)

“Throughout this time police also conducted Counterattack roadblocks and active vehicle stops. Checks were conducted throughout Delta – on busy roads and highways, as well as on quiet streets,” said Leykauf. “Compared to last year during the same time frame, Delta saw fewer impaired drivers - numbers are down about 16 per cent.”

Leykauf said these figures echo what DPD are seeing overall this year in terms of the number of impaired drivers.

“Our preliminary numbers show we are down 13 per cent in 2020, compared to 2019,” she said. “However, we did have a greater number of impaired drivers overall in December 2020 compared to November. And although the holidays are over, we’re not letting up the gas. We will continue make taking impaired drivers off Delta roads a priority in this New Year."

685
City of Delta replacing annual spring clean-up
383
'Do not make plans,' warns Henry in plea to stem Family Day travel
241
Letters: Closure of Delta Hospice is a tragedy for community
238
Safety prompts Delta to install no parking signs near Brunswick Point Trail
236
COVID-19 outbreak over at The Waterford