It’s just another example why Delta needs to have the right to have its fire department notified of medical emergency calls.
Nov 28, 2020 7:03 PM By: Sandor Gyarmati 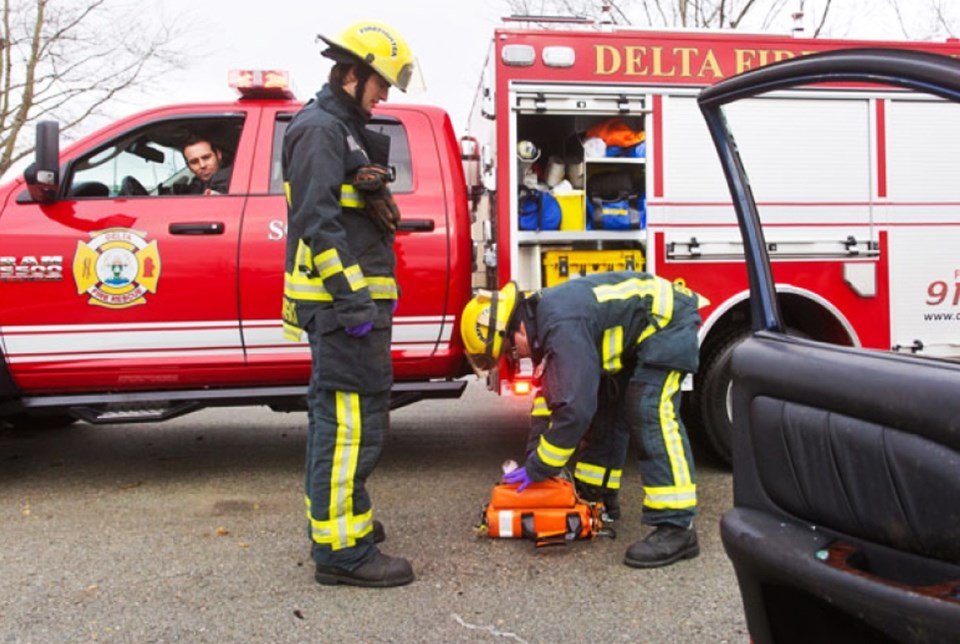 The issue of emergency medical calls and fire fighters has also been discussed at Union of B.C. Municipalities.Delta Optimist file

It’s just another example why Delta needs to have the right to have its fire department notified of medical emergency calls.

Mayor George Harvie made that point at the start of city council’s meeting Monday in describing an incident last week where a family member, who’s a paraplegic, had a fall at home.

“It took the ambulance 45 minutes to attend. My family members want to say special thanks to our fire fighters who were there in four-to-five minutes and provided tremendous support medically to my brother-in-law, and also much support to my sister in-law,” said Harvie.

“As our previous mayor (Lois) Jackson, now councillor, fought hard for this, I want to ensure members of the public myself as mayor and our council members will continue to fight for the right for us to have our fire fighters attend medical calls for helping those that are in need until such time as the ambulace arrives. Again, special thanks to our fire fighters.”

It’s been a contentious issue since 2015, when Delta rolled out a new program to provide enhanced medical aid by firefighters who received additional training.

Changes to 911 protocols three years ago included calls being directed to and controlled by B.C. Ambulance, resulting the fire department only notified about medical calls in certain cases.

Harvie earlier this year noted the fire department has been included in more calls during the COVID-19 pandemic.

“Through our united advocacy efforts, an ongoing dialogue has been established between the Ministry of Health the Fire Chiefs’ Association of British Columbia, and the British Columbia Fire Commissioner. This group is meeting weekly to address outstanding and emerging issues and has already facilitated the return of some calls to the dispatch protocol,” wrote Harvie to other regional mayors.

They said the additional training Delta firefighters received does not provide any immediate lifesaving procedures or treatments, but rather offers increased diagnostic and symptom relief. They said the colour-coded system of classifying emergencies is an evidence-based triage process.

However, other communities had also raised concern when it comes to the Clinical Response Model adopted by BCEHS including Port Coquitlam Fire Chief Nick Delmonico, who said it leaves sick and injured people waiting too long for an ambulance while firefighters are not contacted. Former Port Moody Mayor Mayor Mike Clay also complained about unnecessary delays.