Concerns voiced over application for Ladner farmland
Aug 6, 2014 12:00 AM By: Sandor Gyarmati 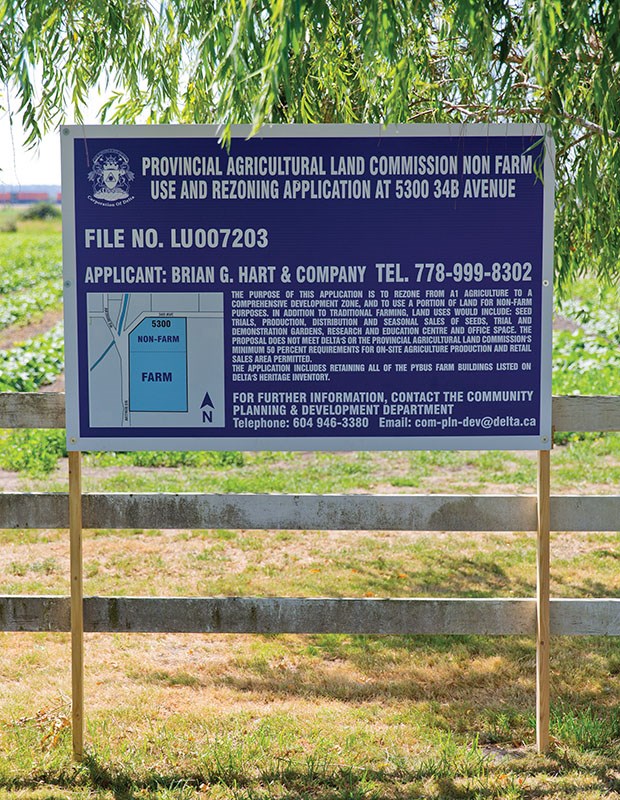 West Coast Seeds Ltd. is looking to rezone property on 34B Avenue in Ladner for a distribution centre.Gord Goble

Neighbours of a Ladner farm say an unwanted precedent would be set if a local seed business was allowed to set up shop there.

Looking to relocate and expand its operations, West Coast Seeds Ltd. has applied to the municipality to rezone a property at 5300-34B Ave. from agricultural to comprehensive development to use part of it for non-farm purposes. The remaining portion would be leased to an organic farmer.

The property adjacent to Arthur Drive is occupied by the historic Walter Pybus residence and barn.

In addition to adding a parking lot, the applicant proposes to renovate the existing barn and plans to use the residence for business purposes.

A Delta staff report notes that while the proposal includes some agricultural uses, it does not meet Delta's or the Agricultural Land Commission's requirements for the site. Several neighbours have called or written Delta council expressing opposition, saying the commercial packing, warehouse and distribution facility has nothing to do with agriculture.

"Allowing this rezoning to industrial activity would be contrary to all of your zoning goals, and weaken Delta's publicly stated farmland goals," wrote nearby property owner Mel Bains.

Others who spoke at a Delta council meeting last Monday had similar concerns, saying allowing a retail operation on property in the Agricultural Land Reserve makes no sense because the products that would be sold are not grown there.

Council voted in favour of a recommendation not to consider preliminary approval, opting to send the application to the ALC for comment.

Civic politicians debated what should and shouldn't be permitted on farmland with Coun. Ian Paton pointing out operations such as farm supply businesses, equestrian centres, wineries, kennels and more already occupy ALR land.

"So, there's many, many examples of agri-businesses taking place on A1 zoned ALR land, and the seed business is about as close

to agriculture as I can think of," Paton said.

Coun. Sylvia Bishop, who voted against even forwarding the application to the ALC, said West Coast Seeds may be a well respected retail operation in Ladner, but the proposed expansion is better suited to an industrial area.

She was also concerned about the amount of land that would be paved over for a 40-vehicle parking lot.

Mayor Lois Jackson voted in favour of getting ALC comment but had misgivings about the application.

"With all due respect, I, like many others, think that West Coast Seeds does a fabulous job and certainly I've supported them. But because we know the people, does that mean we have to go against what our own set of requirements are?" Jackson asked.

"I've been very determined since we first came on this council that we would save our land, and a lot of abuses take place, but does that mean we have to continue to do so? I really have a problem being made to feel guilty that we are not supporting this because these people are so good. The issue is saving the land that we have for farming."

Craig Diamond, owner of parent company BC Turf Ltd., told the Optimist the company, which has a popular retail outlet on Elliott Street in Ladner Village, simply wants to move from its current distribution site at an agricultural property on 64th Street, which it doesn't own, to a newly purchased location to be able to have on-site seed

trials and a demonstration garden.

Noting most of their product comes from the U.S. and much of that is sold to local farmers, he said the operation would only take place on a relatively small area that's currently not being farmed.