The BC Coroner’s Service is hoping to identify the remains of two men found in Richmond – by putting a face on 3D-printed copies of their skulls.
Jan 14, 2020 11:30 AM By: Kirsten Clarke 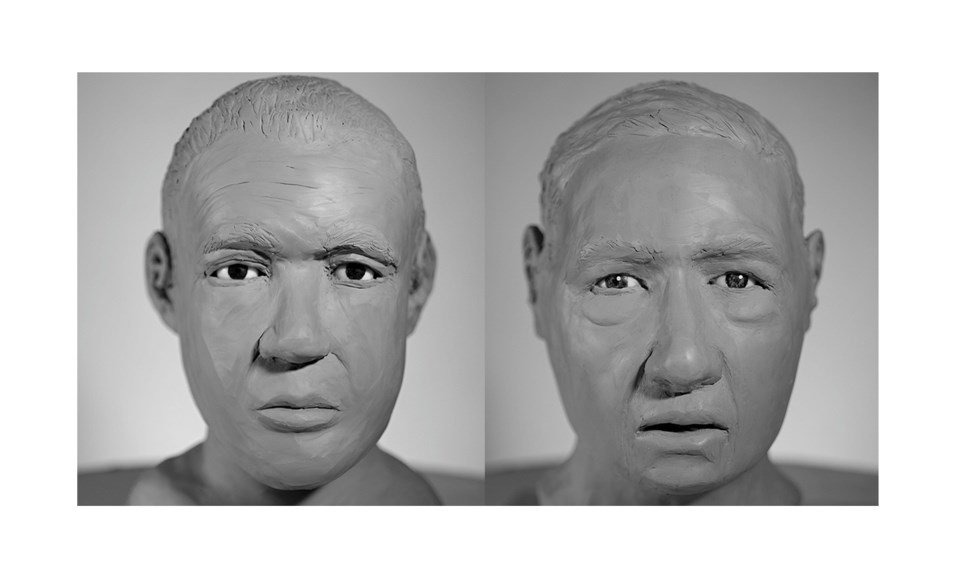 A white male aged 30 to 50 found in July 2004 (right) and an Indigenous man aged 45 to 55 found in June 2008 (left). The remains of both men were found in Richmond. Their faces were reconstructed as part of a project between the BC Coroners Service, RCMP and New York Academy of Art that hopes to shed light on cold cases regarding unidentified human remains in B.C.BC Coroners Service

The BC Coroner’s Service is hoping to identify the remains of two men found in Richmond – by putting a face on 3D-printed copies of their skulls.

The coroner’s service has partnered with the RCMP and the New York Academy of Art to recreate the faces of 14 unidentified men, which are part of the province’s open cold case investigations, dating from 1972 to 2019.

Two of the unidentified men were found in Richmond (pictures in gallery above).

According to the coroner’s service, he had good dental work and a gold tooth in his lower left jaw. It’s estimated he died in 2003 or early 2004.

He had short brown, wavy hair, a medium build, weighed 115 pounds and was six feet tall.

The second man, an Indigenous male aged 45 to 55, was found floating in the Fraser River near the eastern end of Dyke Road on June 8, 2008.

He suffered from severe coronary artery disease and likely died a few months to one year before the discovery of his body, according to the coroner’s service.

The man wore complete upper and lower dentures, which were badly worn. He had a medium build and was five-foot-eight to five-foot-nine inches tall.

According to the coroners service, the people could be from anywhere.

While investigators use a variety of methods to identify a person once human remains are found — for example, searching dental records, sending samples for DNA testing or comparing the remains to reports of missing people — they may turn to more creative methods if traditional approaches prove unsuccessful, according to the coroners service.

“This partnership is a unique opportunity to try to draw new breath into otherwise stalled investigations,” said Eric Petit, director of the BC Coroner’s Service special investigations unit.

“Our hope is that these reconstructions will trigger a memory that results in someone connecting with us or the RCMP, which will lead us to identifying these individuals.”

The skulls were recreated with 3D printing in Ottawa in batches of four, with each batch taking approximately 48 hours to complete, according to the RCMP. Then, they were transported to the New York Academy of Art so students could work to recreate the faces of a total of 15 unidentified men.

The students spent one week, as part of a forensic sculpture workshop, applying clay to the 3D-printed skulls under the guidance of a senior forensic artist with the National Centre for Missing and Exploited Children in the U.S.

The BC Coroner’s and Nova Scotia Medical Examiner services also provided the students with information on the unidentified individuals’ age, sex, ethnicity and height.

More information about these individuals, including the two men found in Richmond, is available at Canada’s Missing.

The recreated faces will go on display in New York in April, as part of the New York Academy of Art’s open studio event.

The academy has hosted forensic sculpture workshops since 2015. Since then, four visual identifications have been directly attributed to the workshop.