Public funding provided annually to DHS came to an end this week and the society will be served an eviction notice
Feb 24, 2021 5:00 PM By: Sandor Gyarmati 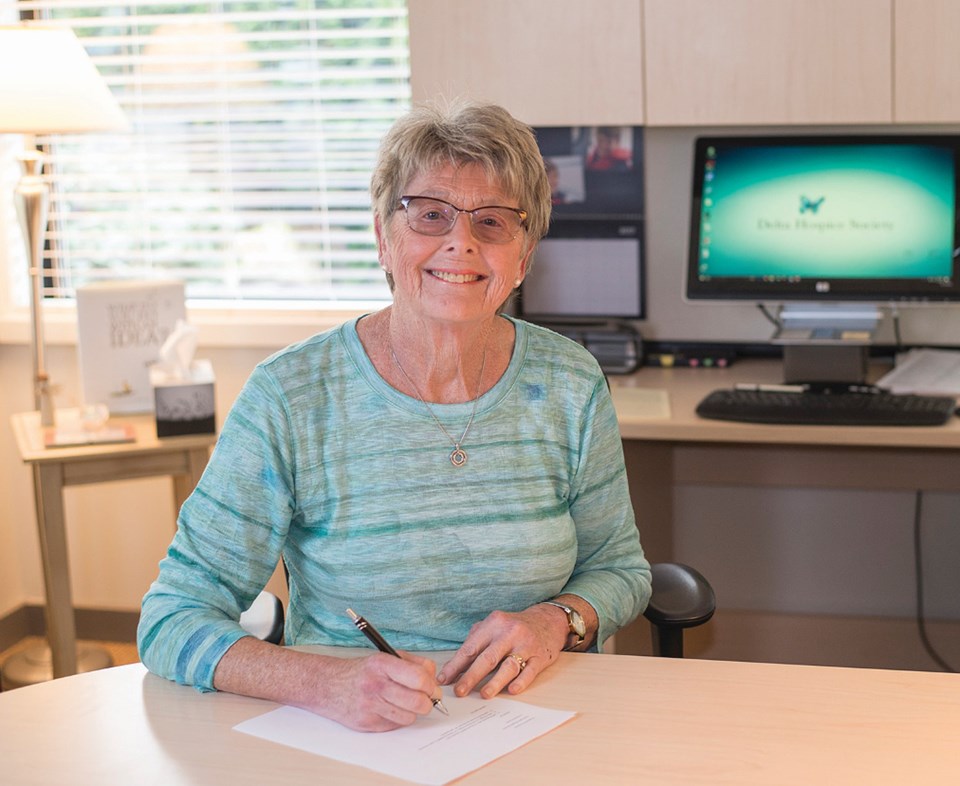 Delta Hospice Society founder and former executive director Nancy Macey, who was terminated by the previous board, said her hope is that capacity in palliative care and bereavement support can be built, instead of destroyed.Delta Optimist file

The clock is ticking for the Delta Hospice Society to vacate the premises.

Fraser Health on Thursday, Feb. 25 is to serve 30 days' notice for the DHS to vacate the 10-bed Irene Thomas Hospice premises in Ladner.

A spokesperson with Fraser Health told the Delta Optimist this week that the health region’s priority is the well-being of patients receiving hospice care and their families, as well as the community of Delta. The health region is working on a transition plan and will release more information soon, said a spokesperson from the FHA in an emailed response.

In a news release issued to the Optimist this week, society founder and former executive director Nancy Macey reiterated their displeasure of the FHA’s actions, saying, “This was not the intent of Fraser Health when the Society offered to build and operate both facilities for the benefit of Delta citizens.”

Macey said the society has been in the business of caring for people living with dying for over 30 years, extending its services to grief support for children, youth, and adults after a sudden traumatic or anticipated death.

Holistic care and clinical counselling are provided at no charge and the only option is private counselling services, she said.

“With an overloaded health care system in BC and the COVID pandemic, it is irresponsible of government to evict a highly functioning Hospice Society off land that once belonged to Delta,” said Macey. “I cannot understand why they would try to deny access for the people of Delta to critical services that embody the health and wellness of its citizens.”

Macey also noted the eviction is “punitive and vindictive” against a small non-profit society that has contributed over $30 million and 750,000 volunteer hours to the Fraser Health Palliative Care Program in Delta.

She added that she has made a plea to provincial medical health officer Dr. Bonnie Henry, Health Minister Adrian Dix, Fraser Health CEO Dr. Victoria Lee and FHA board chair Jim Sinclair to engage in conversation with expert providers to find solutions.

Dix announced last February that the province would give the leadership of Delta Hospice 365 days’ notice that the society will no longer receive funding or be permitted to provide hospice palliative care.

The health region last month announced that on Feb. 25, 2021 the society would receive a 30-day eviction notice, a provision in its contract with the society.

Citing a lack of cooperation from the current society board, which the board has denied, the FHA put the brakes on an interim plan to set up interim hospice beds at nearby Mountain View Manor.

According to the health region, it is actively moving forward to open a 10-bed hospice service at Irene Thomas Hospice in April 2021, but for the time being hospice patients will have to go outside the community.

With the health region also saying the society must vacate the supportive care building, the City of Delta recently stepped into the picture, asking the FHA for Delta to become the lease holder of that facility.

“In the near future, Fraser Health will consider how the Harold and Veronica Savage Centre for Supportive Care supports the broader community. The City of Delta has reached out to us with a proposal regarding the Centre and we look forward to engaging in a discussion with them about possible options related to the future of this facility,” the FHA stated.

The current board, which took control of the society after a heated annual general meeting in late 2019, is opposed to providing the legal procedure medical assistance in dying (MAiD) at the Irene Thomas Hospice, reversing a decision by the previous board to allow MAiD.

It put Delta Hospice at odds with the province and Fraser Health, which mandated publicly funded hospices with non-religious affiliations offer the service to those who request it.